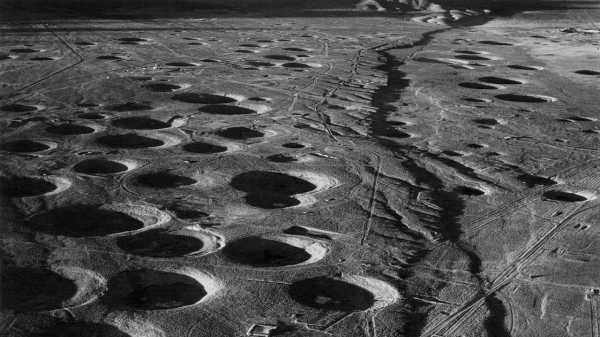 Emmet Gowin made his name as a photographer of the intimate. “For me, pictures provide a means of holding, intensely, a moment of communication between one human and another,” he wrote in 1967. His first mature photographs—the photographs that made him famous—are portraits of his wife, Edith, and her extended family in Danville, Virginia, not far from where Gowin was born. These pictures communicate the familiarity, the domesticity, visible only to an insider. Even Gowin’s strangest, most seemingly artful photographs—like the one of young Nancy in a simple white slip, eyes closed, neck craning backward, arms braided, fingers clasping two eggs; or of Edith, standing with legs wide, in an empty barn, peeing onto the dry wooden planks—have an authority rooted in deep human connection. These pictures feel like art, but they feel even more like life.

In 1972, Rennie Booher, Edith’s grandmother and the matriarch of the family, passed away, followed soon after by several others. Gowin’s subjects disappeared. And so he moved outward, as he put it in a 1997 interview, from life itself to “the space in which life occurs, the local spot from a greater distance.” First the steps were tentative, a picture of the houses his family lived in and the barns they used, and then landscapes and gardens that Gowin saw when he travelled in Europe. But by the nineteen-eighties, Gowin was shooting the surface of the earth from airplanes: the ashy snow and scorched trees on Mt. St. Helens, the mazes traced by irrigation pivots in the American West, and even the nightmarish sprawl of open-pit coal mines in then-Czechoslovakia, the netherworld brought to the surface. 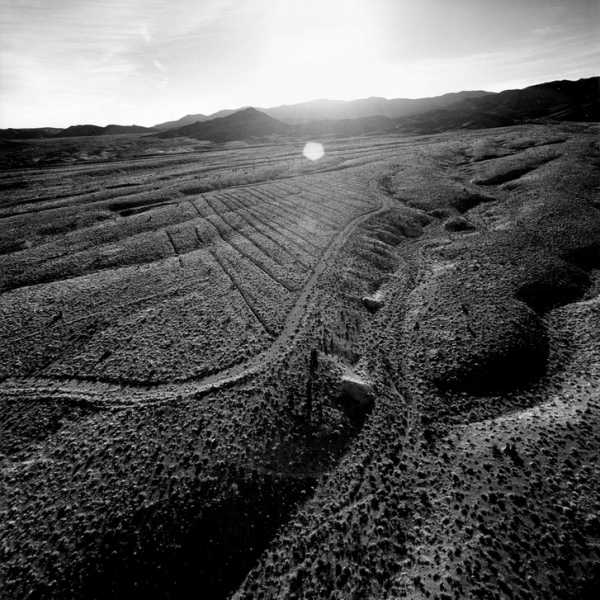 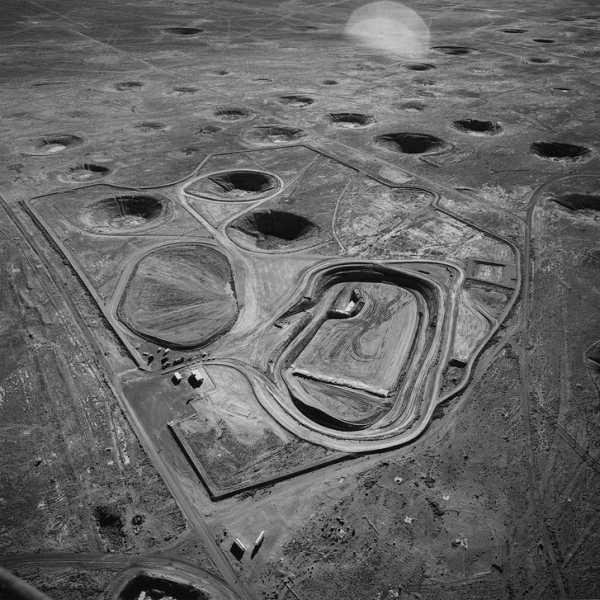 With the sixty-five photographs published in his new book, “The Nevada Test Site,” Gowin has zoomed out even further, turning his attention to the most existential of themes. In 1996, after years of lobbying, and with institutional backing from Princeton University, where he taught for three decades, Gowin was authorized to take pictures of what is now called the Nevada National Security Site, where, between 1951 and 1992, the government detonated more than nine hundred nuclear weapons. In the course of three flights in December, 1996, and December, 1997, Gowin shot from the open door of a helicopter as it flew over approved areas of the one-thousand-three-hundred-and-sixty-five-square-mile site, sixty-five miles northwest of Las Vegas.

A hundred of the government’s tests were “atmospheric,” nuclear explosions in the open air at altitudes of around a thousand feet. But in 1963 the Limited Test Ban Treaty outlawed testing in the atmosphere, as well as over the ocean and in outer space, to limit radioactive fallout. In Nevada, the detonations were moved deep underground. Although linked with increased rates of leukemia, lymphoma, and cancer in downwind communities—suffering that was largely ignored by the government until the Radioactive Exposure Compensation Act of 1990— atmospheric tests left almost no visible trace on the desert. 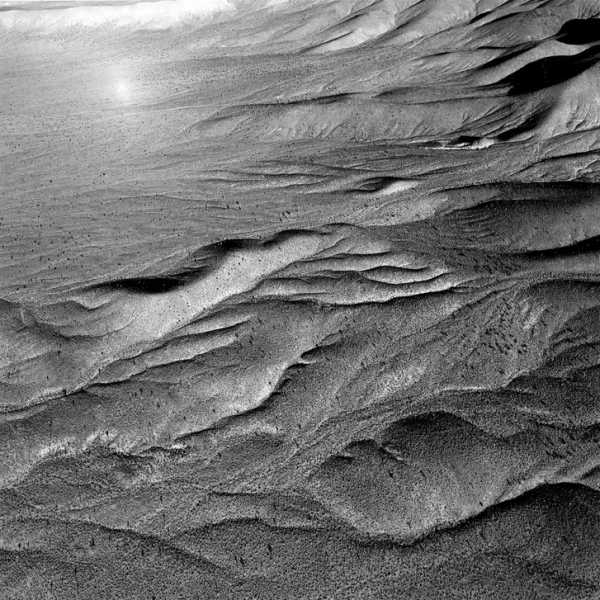 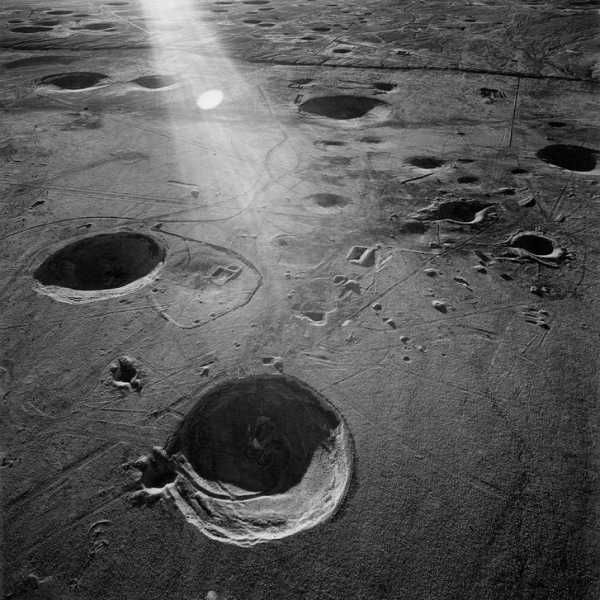 It was the underground tests, and the infrastructure that was built to monitor them, that disfigured the arid Yucca Flat. Once exploded, somewhere between six hundred and two thousand feet feet below the surface, the bombs melted rock, creating vacuums that resulted in massive subsidence craters—pockmarks that look like they were made by asteroids. Subsidence is just as disturbing to witness as explosion. It’s like seeing the earth get the wind knocked out of it.

The largest of the subsidence craters resulted from the Plowshare Program, in 1962, in which Sedan, a hundred-and-four-kiloton nuclear device, exploded six hundred and thirty-five feet below ground. The test was designed as an experiment in the industrial application of nuclear weapons and was, by all perverse government measures, a success, displacing twelve million tons of earth and leaving a crater more than a thousand feet wide and three hundred and thirty feet deep. It stares out from Yucca Flat like the giant sunken eye of a cyclops. The rim of the crater casts a shadow that almost perfectly bisects the gaping basin; the inky black is a concentrated counterweight to the wide-open sky. 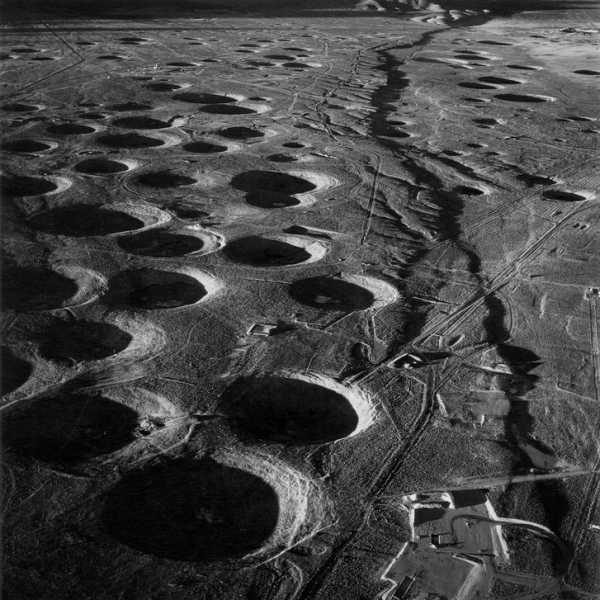 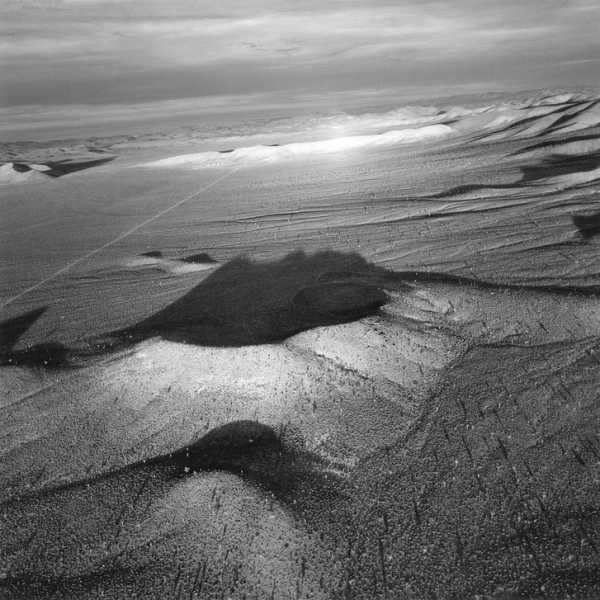 “Ridge Shadows and Hidden Shadows and the Road to the Tweezer Complex, Area 11, Nevada Test Site, 1997.”

Gowin’s richly saturated prints intensify the contrast of light and shadow, accentuating the land’s man-made and natural features. The artificial geometry of roads and waste-storage pads stands out from the organic undulations and gradient washes of the desert, although the two blend together in sites of intensive activity, where human drivers left behind their unruly tracks. Some of the inscriptions on the desert seem like hidden messages. The octopus-like diagnostic array in Area 7, a series of sensors designed to monitor the dynamics of the nuclear explosion that took place there, on August 5, 1982, could have been a cipher engraved on the Voyager space probe. The troop-placement trenches, by contrast, dug to protect several hundred men in nuclear-warfare drills, look, from the sky, like the marks of a reed stylus on an ancient cuneiform tablet.

A sense of mystery and wonder hovers in these images, and it is hard to check the urge to look for symbols. Gowin’s father was a preacher, and the photographer grew up immersed in the moral world of the Bible. His first real encounter with photography was in the late nineteen-fifties, when, flipping through a magazine in a dentist’s waiting room, the teen-ager came across Ansel Adams’s photograph “Burnt Stump and New Grass, Sierra Nevada, California.” “This is another Christ,” Gowin remembers saying when he saw the tendrils reaching up from the base of the carbonized tree. It was death and resurrection in a single picture. In the late seventies, Gowin read the poems of William Blake, and he was struck in particular by Blake’s mythmaking in “The Marriage of Heaven and Hell.” “I like that Blake equates evil with energy and exuberance, with life,” Gowin has said, “and places the human task as the reconciliation of these two opposites.” Blake famously read Satan as the true hero of “Paradise Lost,” proclaiming Milton “of the Devils party without knowing it”—and in Gowin’s entrancingly beautiful pictures one feels a similar admiration for the power that humans have wielded to shape the earth in their image, however ugly that image may be. They record tragedy of cosmic proportions, but at the same time they capture the sublime power of the fallen king. 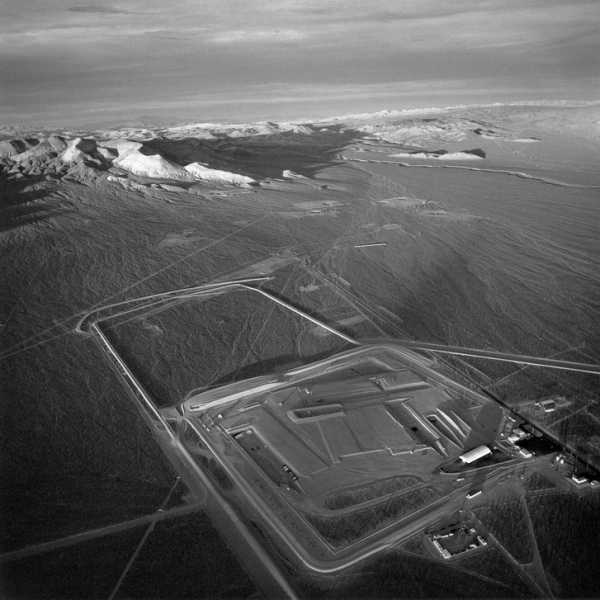 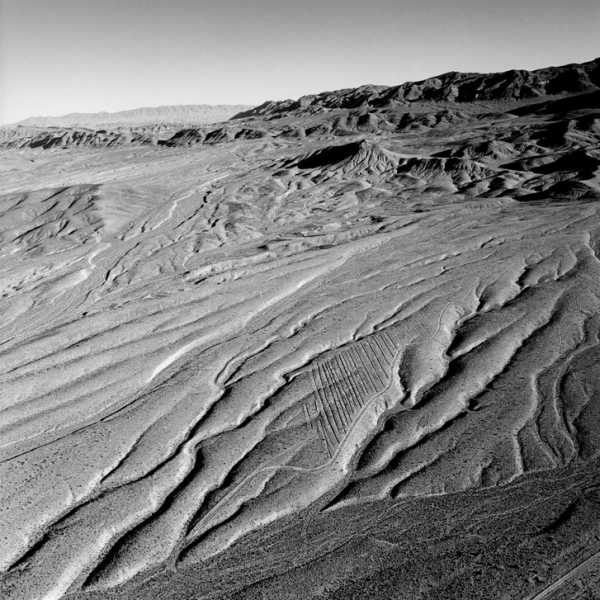 Gowin’s aerial perspective is also fraught with ambivalence: the bird’s-eye view affords us a godlike prospect on the land, but it is also what a bombardier would see through his scope, or a drone pilot on his screen. Yet Gowin is still the one who portrayed Edith and Elijah and Nancy, and Rennie and Raymond Booher. Gowin reclaims the aerial point of view, displacing the tactical objectivity of warfare with the ethical gaze of the portraitist. The photographs of the desert invite and challenge us to look at the beleaguered earth the way that we would look at a portrait—to see this wasteland as the object of care.

Gowin’s elevation of the Nevada Test Site from the historical to the aesthetic realm helps us to see the big as we’d see the small. We appreciate first how the long, straight military roads resemble the lines of a Mondrian, how the splotchy mineral deposits of the Nevada playa hum with all the mysterious and encoded radiance of a Pollock. Then, as we grow more comfortable with the pictures, we begin to see what lies beneath the beauty. “We know the earth is like our body,” Gowin said in 1997. “It has a circulatory system, it has a skin, it has its energy.” The desert starts to look less like a painting and more like a creature’s back, or like living cultures in a petri dish. In his graceful, compassionate earth portraits, Gowin shows us not environmental degradation but wounds and scars on the earth’s face.

With more than six thousand nuclear weapons in the American stockpile, we are still in the atomic age. But the anxiety that haunts us now is of the slow, creeping climate crisis, not an instant catastrophe but an Iliadic siege. The ethical problem of that crisis, beyond mere political organization, remains the same as the one that animates “The Nevada Test Site”: How do we focalize our little lives in relation to the world? And how do we regard that world, however disfigured, with the same care and attention we would give to another person? Gowin’s work teaches us how to recuperate some of the beauty lost when nature is desecrated, and how to expand our sphere of intimacy to the land itself. His pictures are proof that even humanity’s vilest weapons can’t entirely void a place of its dignity. As the world warms, the sea rises, the forests burn, and our fellow-creatures suffer, there will still be beauty. Beauty to take comfort in. Beauty to mourn. 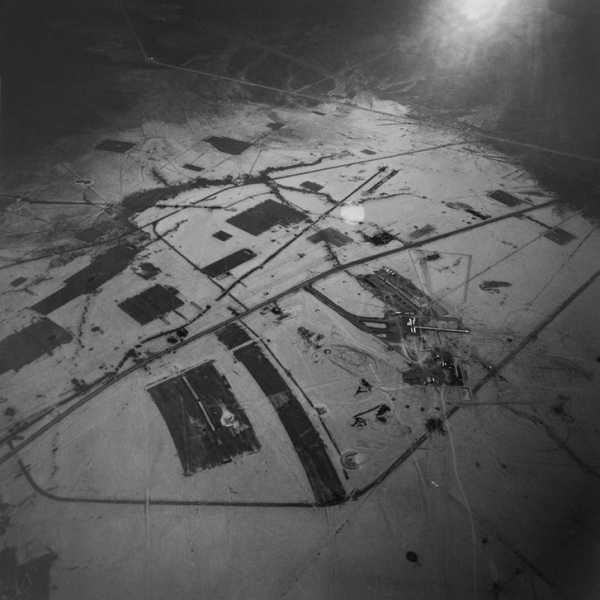 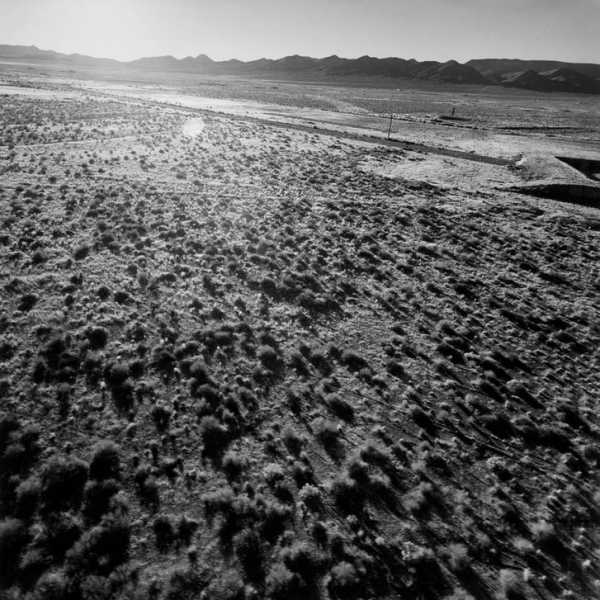 What Republicans in Congress say about passing a bill to protect...

Russia Ready for Partnership With EU, US Based on Mutual Respect...

The Precarious Spectacle of the Girl Boss in “Lindsay Lohan’s Beach...