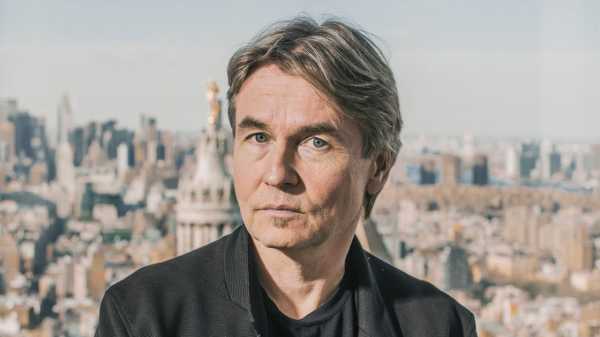 “It’s good to be back in California,” Esa-Pekka Salonen said the other day, brewing an espresso in the kitchen of Frank Gehry’s house in Santa Monica. The Finnish composer and conductor led the Los Angeles Philharmonic for seventeen years, from 1992 to 2009, establishing it as the most adventurous orchestra in America. In 2003, the L.A. Phil took up residence in Gehry’s Walt Disney Concert Hall, which proved to be an uncanny reflection of Salonen’s refined, outward-looking modernist aesthetic. When Salonen is in town, he often stays at the avant-garde house that Gehry built in 1978, or, more precisely, wrapped around an existing bungalow. Having made his coffee, Salonen sat beneath a cactus tree on the patio outside, wearing a T-shirt and shorts. “Christmastime in L.A.,” he said, in his wry, laconic manner.

“Back in California” didn’t refer only to Salonen’s frequent return visits to L.A. It was announced on Wednesday that he will be the next music director of the San Francisco Symphony, succeeding Michael Tilson Thomas. The news is likely to generate surprise in the music world, not to mention a certain amount of chagrin. Salonen, who turned sixty last June, is indisputably one of the major personalities in classical music, his stature as both composer and conductor almost comparable to that of Pierre Boulez, the idol of his youth. Many leading orchestras have sought him out. A few years ago, he had tentative conversations with the New York Philharmonic, although these led to nothing.

Salonen himself seems a bit surprised by the latest turn of events. When he stepped down from the L.A. Phil, yielding the podium to Gustavo Dudamel, he indicated that he had no interest in another year-round music-director position. He took a post with the Philharmonia Orchestra, in London, which demanded less of his time, and otherwise concentrated on composing. Last year, in Chicago, he unveiled one result of his labors: a cello concerto, written for Yo-Yo Ma. He also recently signed on as the leader of a conducting program at the Colburn School, in Los Angeles; he plans to continue teaching there while he is based in San Francisco.

“It all came together rather quickly,” Salonen told me. “Some folks from San Francisco came to London in August, to see me conduct the Philharmonia at the Proms. There was no particular focus—we were just talking. And I started to get this feeling, as sometimes happens in the best human relationships, where you have the sense that someone wants you just as are, in every aspect, and not, ‘I like this part of you, but change that.’ They made it very clear that what they wanted was what I represent, whatever that is. They told me to feel free to imagine things. Which is actually rather rare in this business. So often, you are told, ‘Here is the grid: fit in. Here is the animal: ride it.’ ” A virtuoso of metaphor, Salonen also compared himself to waffle batter being poured into a waffle iron. “Too often, whatever you put into it, the same waffle emerges.”

Salonen has a knack for landing in environments where the grid is less fixed. He came to L.A. at the behest of Ernest Fleischmann, a brilliant, imperious executive who sought to reshape the orchestra as a flexible “community of musicians,” playing Brahms one night and Boulez the next. In San Francisco, Salonen arrives in the wake of Tilson Thomas, who has a decades-long record of orchestral innovation, notably with his “American Mavericks” programs. “I had dinner with Michael the other night,” Salonen told me, “and we were joking about often how our careers have intertwined. In 1983, I substituted for him at the Philharmonia with the Mahler Third, and that really launched my career. In the nineties, we were both in this part of the world, pursuing a bunch of the same goals. This week, while I am going up to San Francisco to be announced his successor, he’s here conducting the L.A. Phil.”

I first interviewed Salonen in L.A., in 1994. At that time, he was remarkably clear about what he wanted to achieve, and, by and large, he has achieved it. He wished to make the orchestra more attractive to generally cultured people who follow art, literature, film, and pop music but who never attend concerts. He told me then: “If you want to reach a young person who has not learned classical music at home or in the schools, the best repertory is 20th-century repertory rather than Mozart or Haydn or Beethoven. Just because of the familiarity of the sound world, something like ‘Le Sacre’ gives you a sense of recognition, even if your only point of reference is rock music.” The conventional wisdom of the day held that modern music was apt to alienate the audience. Salonen proved that a forward-thinking orchestra can not only survive but prosper. The L.A. Phil is today a financial powerhouse, even as it forges ahead with novel programming.

So what can Salonen do in San Francisco that he didn’t do in L.A.? “For one thing, I am in a very different place now than I was when I first came here,” he says. “Back then, I wasn’t thinking too much about the problems of younger composers. I wasn’t necessarily interested in nurturing new things, maybe because I was myself a new thing to be nurtured. Now that’s very much on my mind. So many composers get a score played once, on very little rehearsal, and then it vanishes. I want to create a situation in San Francisco where we have an extended period of working with composers on pieces, and then keep them in rotation.” Salonen will be composing for the orchestra as well; commissions are written into his contract.

In January, Salonen will go to San Francisco to conduct a program of consisting of Strauss’s “Also Sprach Zarathustra,” Sibelius’s “Lemminkäinen Suite,” and “Metacosmos,” a hypnotically seething soundscape by the forty-one-year-old Icelandic composer Anna Thorvaldsdottir. Salonen, who led the première of Thorvaldsdottir’s piece at the New York Philharmonic last April, sees her as exemplary of the spirit he wishes to cultivate. “She has identity, voice, a unique sound world. Her clear sense of form counterbalances her complex textures. And she can create breathtaking moments of real emotion.”

As Salonen thought about the new job, he decided that he would need a team of inventive younger minds around him. “At a certain point,” he says, “I had to face the hard fact that I am a sixty-year-old Finnish guy who could definitely use some help finding new voices and new ways to communicate with the audience.” On short notice, he has assembled a team of collaborators from various disciplines: the flutist and new-music impresario Claire Chase, the soprano Julia Bullock, the violinist Pekka Kuusisto, the composers Esperanza Spalding, Nico Muhly, Nicholas Britell, and Bryce Dessner, and the artificial intelligence scientist and roboticist Carol Reiley.

The intersection of music and technology has long fascinated Salonen. He is an avid consumer of gadgets; in 2014, he made an impeccably cool ad for the Apple iPad. That he is now moving to the world capital of tech is not lost on him. One of those who approached him about the San Francisco job is the Silicon Valley venture capitalist Matt Cohler, who is on the orchestra’s board of governors. To date, the tech sector has shown little interest in supporting the performing arts. If anyone can turn that trend around, it is Salonen, who is as comfortable speaking at Apple or the South by Southwest festival as he is on the conductor’s podium.

Composers have been working with electronics and computers for generations, but Salonen believes that more discoveries await. He has been studying three-hundred-and-sixty-degree soundscapes, and is eager to see what can be done at the San Francisco Symphony’s SoundBox venue, where a high-end Meyer Sound system simulates a variety of acoustical environments. He anticipates interactive installations along the lines of the Philharmonia’s hugely successful Re-Rite project, which allowed the visitor to walk through “The Rite of Spring” and explore its mechanics. He also wants to reach out to people with disabilities. “There are haptic devices that allow deaf people to experience an orchestra by feeling the resonance. A Swedish composer I know, Jesper Nordin, who employs motion sensors and has developed apps, is collaborating with a company to help severely paralyzed people to make music. Even if you have even the tiniest bit of mobility somewhere, that movement can be used as a mini-controller. And so on.”

At the same time, Salonen cherishes the symphony-orchestra tradition, and sees no need for it to be transformed beyond recognition or junked altogether. “I know that the rigidity of the concert experience can be problematic for those on the outside. That Stravinsky project worked so well because it allowed people to explore at their own pace. Some stayed for a few minutes—some people stayed all day. But, once you become accustomed to this curious ritual, you often develop a liking for it. It’s a relief. You’re not checking your cell phone ten times an hour. It’s almost like a mindfulness exercise. You can let your mind wander or you can focus intensely or you can associate freely. The ritual itself has power. Also the fact that there’s this master of ceremonies, the priest or priestess of whatever the cult is—the conductor. But we need different avenues of approach. We need different ways for people to have these sorts of conversion experiences, not to get too carried away with the religious thing.”

Salonen won’t take up his new post until the fall of 2020, and he has only just begun to make plans. “For the moment, this is just me drinking coffee and talking. But something I have always liked about California is that things seem more possible here than elsewhere. And, at this stage of my life, I have to keep learning new things. Boulez used to say always: ‘The moment you lose your curiosity, you might just as well keel over.’ ”

Who would you select in a combined England-Ireland team?