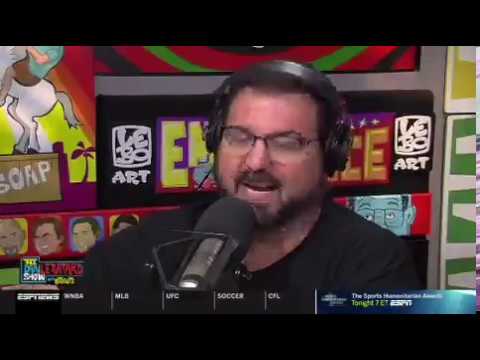 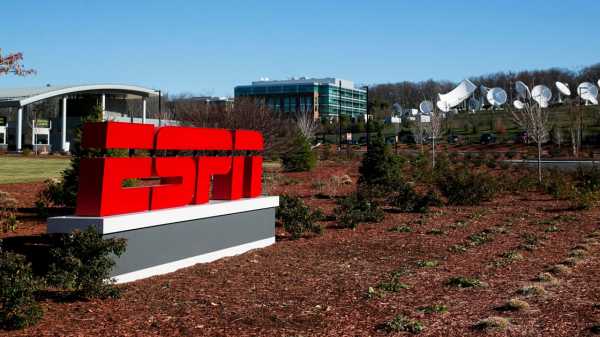 During his radio show last Thursday, Dan Le Batard, one of ESPN’s most popular hosts, spent a few minutes talking about something other than sports. That, for Le Batard, was hardly unusual: on any given morning, you might find him discussing the deliciousness of bacon with his sidekick, known as Stugotz, or the new “Top Gun: Maverick” trailer, or, on Tuesdays, donning a pith helmet for a weekly segment on the animal kingdom with Zoo Miami’s Ron Magill. But, on Thursday, Le Batard wanted to talk about Donald Trump, and about the rally that Trump had held the night before, in Greenville, North Carolina, during which he suggested that the Democratic congresswoman Ilhan Omar, of Minnesota, didn’t love the United States, and the crowd, inflamed by Trump’s attacks, responded with chants of “Send her back!” Le Batard, whose parents came to the U.S. as exiles from Cuba, also wanted to talk about the fact that his employer didn’t want him to talk about politics. “There’s a racial division in this country that’s being instigated by the President, and we here at ESPN haven’t had the stomach for that fight,” he told listeners at the start of his monologue. “We don’t talk about what is happening, unless there is some sort of weak, cowardly sports angle that we can run it through.”

A clip of the show went viral and generated headlines across the Internet. Much of the segment’s power came from Le Batard’s articulate passion; for all his self-deprecating irreverence, Le Batard is known for his intelligence and moral authority. But there was also a slightly voyeuristic undercurrent to some of the coverage, because Le Batard was going up against a company that is at once very powerful and, also, a little vulnerable. ESPN instituted its no-politics policy—hosts are not to address political matters unless they are directly raised by a sports story, such as a protest by athletes—in 2018, amid declining ratings and after a series of public controversies; most notably, the former “SportsCenter” anchor Jemele Hill had called Trump a “white supremacist,” on Twitter, a comment that the White House later described as “a fireable offense.” The company had recently hired a new president, Jimmy Pitaro, who, when he announced the policy, suggested that it was informed by what ESPN viewers and listeners wanted, and was intended to help the company’s employees understand the parameters. “Without question our data tells us fans do not want us to cover politics,” Pitaro said, in May, 2018. “My job is to provide clarity. I really believe that some of our talent was confused on what was expected of them. If you fast-forward to today, I don’t believe they are confused.”

Le Batard was not confused, but he seemed to think that ESPN was. After all, the decision to silence or restrict the commentary of commentators is an inherently political decision—an attempt to avoid a certain kind of controversy. Given the specific criticisms that were lobbed at Hill by Trump and his partisans, ESPN’s policy is rightly seen as an effort to rebut the perception that the network has a leftward bent. Le Batard has talked about this on the air before. After Trump instituted a travel ban that targeted Muslims, in 2017, an ESPN executive sent employees a memo with instructions for ways to address the Muslim ban that the network would consider appropriate. Meanwhile, on Instagram, another on-air talent, Sage Steele, posted a picture of the protests against the ban at Los Angeles International Airport, along with a caption in which she complained about missing a flight, and wrote that she was “saddened” that the protesters were “successful in disrupting so many people’s travel plans.” “You can’t give Sage Steele this voice and then muzzle the son of exiles,” Le Batard said on his show.

That was before ESPN put in place its blanket policy. This time, though it was clear that Le Batard had violated it, ESPN’s initial public response was muted. Le Batard appeared on his shows on Friday; when Monday arrived, he did not do his morning radio show—but this was his choice, reportedly, and he did host his TV show, “Highly Questionable,” in the afternoon. He reportedly spoke with Pitaro about ESPN’s no-politics policy over the weekend; the network reiterated that it was still in place. An ESPN source told USA Today earlier this week that discussions about whether and how to discipline Le Batard were “ongoing.” A spokesperson for ESPN declined to comment for this story; Le Batard did not respond to a request for comment.

ESPN is hardly the only company that believes controversy is bad for the bottom line. And it is not the only journalistic organization that has issued social-media guidelines. (“Newsroom employees should avoid posting anything on social media that damages our reputation for neutrality and fairness,” the Times’ policy instructs.) The idea that sports can be a unifying force in American life—that they bring together different generations, races, genders, and classes, and broadly shape our understanding of competition and fair play—is an old one, and true. Many of the fans that Pitaro referred to when describing ESPN’s policy last year do, I’m sure, sincerely view sports as an escape, and want sports to be walled off from the rest of the world. But they never have been.

It is an uncomfortable truth that, in this country, sports offer one of the rare mainstream platforms for people of color. It is a given that Trump will continue to foment racism in his effort to be reëlected, and people like Le Batard, whose job it is to talk about sports, will face the choice, and the consequences, of focussing on that or on N.F.L. training-camp news.

One approach, which Le Batard seemed to float last week, at first, but then declined to pursue, is to suggest that racism is not political. This is the rhetorical strategy that was employed by Fox Sports 1’s Nick Wright, whose tweet about the Trump rally Le Batard used as a jumping-off point for his comments. “I don’t talk politics on here,” Wright wrote, “but this isn’t political, this is obvious: This is abhorrent, obviously racist, dangerous rhetoric and not calling it out makes you complicit. The ‘send her back’ chant + the ‘go back to where you came from’ are so antithetical to what we should be.” There is something honorable, even seemingly idealistic, in the suggestion that, while we may have political differences, we can be united in condemning racism. But to see anti-racism as somehow above politics, transcending it, in an attempt to make it uncontroversial, is to ignore the political role that racism plays, and is playing, right now.

Perhaps one reason that Le Batard’s clip resonated, and why his dilemma over whether to continue speaking out and risk angering his bosses seems so relevant—even to those of us who do not host massively popular radio shows—is that many people feel like what he did is what we should be doing: turning off the baseball game and focussing on what feels urgently important. Le Batard, after all, is not prohibited from talking about politics (or race, or gender, or immigration, or class) where they intersect with sports; he has been doing so all along. But his appeal on Thursday had an added weight precisely because he refused to filter the scene at the rally through sports. It needs to be seen for what it is.

On Tuesday, Le Batard was back on his show, introduced by the chords of David Bowie’s “Rebel, Rebel.” “I’m a little scared, a little nervous,” he said. “I’m walking a bit of a tightrope.” Music cut him off, the cue to make it light. It was in keeping with the show’s usual self-awareness, and irreverence—a reminder that people do turn to Le Batard in part to escape from other things, whether through laughter or through sports. But his initial comments hung in the air. On Wednesday afternoon, the Washington Post reported that Le Batard would be meeting with Pitaro, on Thursday, to “discuss his future.” It feels as though whatever they decide will affect more than just his future.

Roger Federer’s career in numbers as he becomes oldest world No...