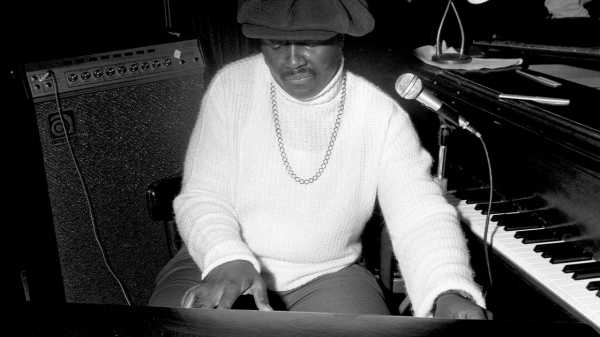 At the start of the 1969 hit “The Ghetto,” the legendary soul singer Donny Hathaway plays a deep bass line on electric piano and swoops up to his falsetto, as if to outline a shape that the song will fill with guitar, bass, congas, soul claps, and fragments of speech. (“Leave her alone, man,” someone says. Someone else says, “Pass the joint.”) Gradually, the song, in defiance of the two-dimensional image of the depraved “inner city” that was pushed by sociologists in the wake of the urban riots of the sixties, paints a portrait of the ghetto as a site of complex pleasures, untold stories, and unwritten rules.

The song’s depth and texture is created, in part, by a female singer who blends her voice almost seamlessly with Hathaway’s falsetto while also enhancing the song’s discipline, color, and range. “Talking ’bout the ghetto,” she sings, over and over, steady as a metronome, an octave above Hathaway’s line; then, moving deftly into her chest voice, she extends and amplifies the last word, as he fades out. The singer is Eulaulah Hathaway, Donny’s wife. Their infant daughter, Lalah, was in the studio, too, her presence memorialized on the recording when her whine of complaint gets zipped into a high-pitched squeal.

Forty years later, Lalah is an acclaimed singer whose most recent album, “Honestly,” is nominated for the Grammy for Best R. & B. Album, an award she won in 2017 for “Lalah Hathaway Live.” For the past three decades, Lalah has been recognized for such talents as her frankly astonishing ability to sing chords and also her subtler gifts: her sensual, inventive approach to melodies and her smoldering tone. This year, the Recording Academy will present a Lifetime Achievement Award to her father, who, before his death, in 1979, at age thirty-three, from an alleged suicide linked to schizophrenia, recorded some of the most beautiful and innovative soul music of the late twentieth century: impeccably phrased ballads like “A Song for You” and classic duets with Roberta Flack. Eulaulah Hathaway, for her part, was mainly known to the public through photos in Ebony and Jet in the seventies: here is the glamorous woman beside her famous husband; here is the mourning widow and single mother at his funeral. But she was a formidable singer in her own right. Now seventy-three, she recently spoke with me from her home, in Virginia Beach, about music education, God-given talent, and craft.

Eulaulah was born in Danville, Virginia, to a family of bright, studious musicians and teachers. Her father, who had earned his doctorate from Boston University, was a minister at a church where her mother played hymns. Her elder sister was a musical prodigy who played the organ at Marsh Chapel, at Boston University. Eulaulah started piano lessons when she was six or seven, and she was working as a church accompanist by age eleven. She attended Howard University, in Washington, D.C., where she majored in voice. That’s where she met Donny, who had grown up in St. Louis.

Howard’s curriculum in the nineteen-sixties was strictly focussed on classical music, but students found ways around that, as Eulaulah explained:

A bunch of us students would get down in the practice area, and we’d always have somebody watching to see if the dean came in, and we’d be singing gospel. If the dean happened to come in, the lookout would run and tell us, “Dean is here, Dean is here!” And we’d jump back on the pianos and act like we were practicing all along. They really wanted us to stick to the classical life style, but they had to know that those weren’t the homes most of us were from.

Still, she adored the classical repertoire, which she performed as a first alto in Howard’s nationally renowned concert choir. Donny was in the choir, too, and they had several classes together, to which he rarely showed up. He was busy gigging around Washington, D.C., and he had already learned a great deal from classes that he took at Washington University, when he was still in high school. Plus, his reputation as a prodigy preceded him. His professors made him a deal. “They told him that if he could pass the test, he was welcome not to come to class,” Eulaulah said. “And he always aced it.” Would they have made such allowances for a female student, does she think? “Oh, you know they wouldn’t have!” she said. “They’d be writing all kinds of letters home to their parents.” But Eulaulah was amused by the situation. “I thought it was fun—I had never seen anything like that,” she said.

However, she didn’t fall for Donny right away. “He was real funny,” she said. “He had a very pleasing personality. . . . and I guess it just evolved through seeing each other so much.” After Howard, she moved to New York to pursue an advanced degree in voice at the Manhattan School of Music. Donny was still in D.C., and they saw each other about once a month. Was she serious about him at this point? “Quasi,” she said.

But then, in June of 1968, Bobby Kennedy was assassinated, and Donny asked her to take the bus down to Washington. “It was so grave,” she recalled, “tanks in the street. . . . Everything became so. . . . It was almost like 3-D. The schools were out. People were walking around in a daze. . . . Because you really didn’t know why he was being killed. . . . And, of course, they had already killed his brother.” She and Donny “just talked about things, watched a lot of television coverage. In your heart of hearts, you realize: this is real life. And I think we got closer at that point.”

They married and moved to Chicago, Donny’s birthplace, where he had been recruited to work as a writer and producer for Curtis Mayfield. Their circle of friends included Ramsey Lewis, Maurice White (of Earth, Wind & Fire), and Minnie Riperton. At home, they listened to gospel, classical, and jazz, and they wrote countless commercial jingles, for companies like Pet Milk and McDonald’s. They also collaborated on Donny’s solo recordings. One day, when he was rehearsing the Nadine McKinnor composition “This Christmas,” he added a lyric—“Shake a hand, shake a hand”—that Eulaulah jumped in to complete: “All over the land.” “And he kept it!” she said, still sounding delighted and surprised.

She shared her husband’s ability to sing just about anything. In those years, she sang backing vocals not just for him but for other artists, like Jerry Butler and the Five Stairsteps, who needed a high female voice. (Despite having sung alto in the Howard choir, she now sang soprano.) Although she had studied voice in the hopes of becoming a classical soloist—this despite the dearth of such positions for black women, with the exception of stars like Leontyne Price and Grace Bumbry—she was not dismayed to be singing pop. “I mean, music is music,” she said. And, she was working with the best. 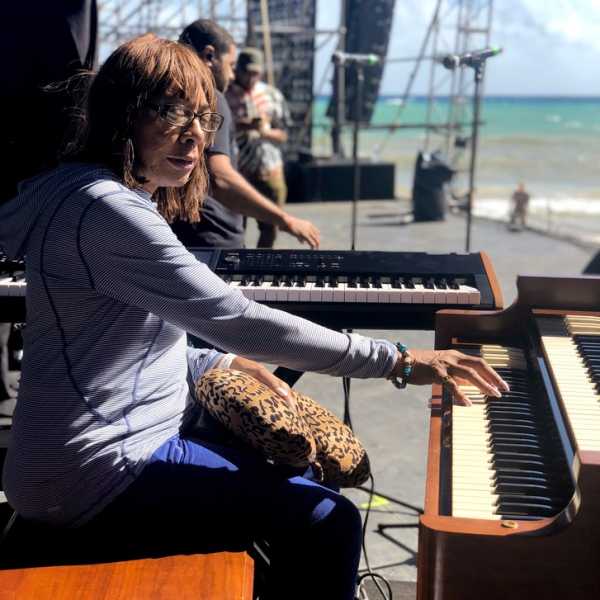 It was not unusual for her and Donny to bring baby Lalah to the studio with them. “I would take her and her little chair and everything, and she’d sit there with her little finger in her mouth and watch us,” she explained. For “The Ghetto,” they handed Lalah to the guitarist Phil Upchurch, who had a huge Afro that scared her. She cried by design. “That’s what [Donny] wanted,” Eulaulah said, matter-of-factly. “Those were the sounds of the ghetto.”

Eulaulah’s solo ambitions abated as her husband’s career took off. But she maintained clear ideas about vocal performance, especially the subject of phrasing. “You pretty much have to sing as you talk,” she said. “You can’t get in the middle of a sentence and break it up. . . . It has to sound like a sentence. So if you have the word ‘he,’ and ‘did’ comes after it, and you’re going to pause or have a comma between them, now, how much sense does that make?” She added, “You can do a fast song and get away with it, but ballads are your most crucial ones.” One artist with a beautiful grasp of the art of speech-like phrasing was Nat King Cole, she said. One artist who was receptive to her principled stance on it was Donny Hathaway. When, every so often, she critiqued her husband’s delivery and suggested a different approach, Eulaulah said, “He would receive the notes.”

After Donny’s death, she said, “I kept my vocal training going. Enjoyed it. Didn’t do a lot with it. But enjoyed it.” And she insured that Lalah and her younger sister Kenya both had lessons, which they began at ages four and two. Both daughters went on to attend Berklee College of Music, in Boston, and Kenya took up her mother’s supporting role, in her own way, by working as a backup singer and coach on “American Idol.” Eulaulah often accompanies Lalah on tour, but she rarely chimes in with the kinds of notes she gave her husband. “She’s pretty good at what she does,” she said.

On the subject of her daughter’s Grammy wins, Eulaulah’s dry wit gives way to pride. “I think it’s absolutely phenomenal, because Lalah has five Grammys already, and she’s been nominated for three more,” she said. “In Donny’s case, he used to talk about how he wanted his music heard all over the world. He, as we know it, isn’t here to see it. But it is happening.” Eulaulah said that she sees herself as “a connector that He put here for this purpose,” to nurture the music of others. But, she also said, her late husband didn’t need much help. “There are made musicians and there are born ones,” she said. “And Donny happened to have been a born musician.” Is she herself one of the “born” ones? “Probably,” she said. “Or born into.”

Pakistan Approves Import of 300,000 Tonnes of Wheat to Curb Flour...

The bizarre allegations of ballot tampering in one of 2018’s closest...

Maldives to Not Proceed With Free Trade Agreement with China