Home Culture Even Prince Harry Has to Hustle | 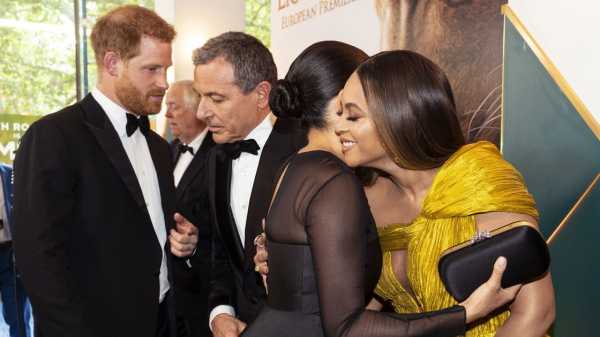 On Saturday, a short video, originally recorded in July of last year, at the London première of the movie “The Lion King,” resurfaced online. The clip, apparently captured by a fan and published by the Daily Mail, shows an interaction on the red carpet between Prince Harry, the Duke of Sussex, and Bob Iger, the chairman and C.E.O. of the Walt Disney Company. In the video, Meghan Markle, the Prince’s wife, warmly greets Jay-Z and Beyoncé, who voices Nala, Simba’s love interest, in the remake, while, nearby, the Prince is seen speaking to Iger. “You know she does voice-overs?” Harry asks, pointing at Markle, who has her back to him. “Oh, really?” Iger responds, smiling broadly, if a bit uncertainly. The Prince continues, “Did you know that? You seem surprised,” his hands a whirl of seemingly nervous energy. The two men share a brief chuckle, until Harry suddenly turns serious. “She’s really interested,” he says, doubling down on the pitch, and Iger, swiftly mirroring the Prince’s more businesslike mood, replies, “Sure. We’d love to try.”

Prince Harry, sixth in line to the British throne, and Markle, a biracial, divorced American actress, have long pushed against their traditional royal roles; even the fact of their union, they have argued, apparently with some justice, has been unfairly attacked by the British press. But, last Wednesday, when the couple announced on their Web site, seemingly without the foreknowledge of Harry’s grandmother, Queen Elizabeth II, that they are planning to take a “step back” from their position as “ ‘senior’ members of the Royal Family,” to carve out a “progressive new role” within it and become “financially independent,” the statement struck royal-watchers—and also, evidently, the Royal Family itself—with considerable force. At the moment, it is not yet clear what exactly the couple’s so-called stepping back—quickly dubbed “Megxit”—might look like, though it will apparently include spending part of their time in North America: perhaps in Canada, where Markle worked for years while filming the TV show “Suits,” and perhaps, too, in California, where she was born and raised. On Monday, the Queen released a statement, in which she announced support of Harry and Markle’s decision to make a “new life” as a family. What form this support will take, however, also remains vague. “Final decisions,” the Queen wrote, will be “reached in the coming days.”

Taken in context, the “Lion King” clip was just an addendum to a larger drama. Still, despite or perhaps because of its incidental nature, it was captivating. There was something awkward and endearing, and also recognizable, in Harry’s determination to talk up his bride’s abilities to the Disney chief. (“She does voice-overs” seems like a touchingly modest claim for someone who is known to millions, much more grandly, as the Duchess of Sussex.) The Prince’s sweaty-palmed seizing of his moment with Iger reminded me almost viscerally of too many occasions in my own past in which I attempted to charm a more successful writer or editor at a holiday party, or tried to draw out a snooty collector or curator at a gallery dinner, alongside my more reserved artist husband. These efforts were not planned, exactly, but I would be lying if I said I wasn’t at least ambiently aware of my more desperate impulses and ambitions—for career success, or for social position. As traditional, secure professional structures continue to collapse around us, it seems that, more than ever, we are living in the era of the hustle. And it turns out that princes, especially those determined to strike out on their own, are hustlers, too.

But, though it’s a relief to discover that even royals are a little bit grasping and a little bit loserish (in the words of a friend, “I loved the video because it made me feel less pathetic”), they are, in the end, still royals. Shortly before the “Lion King” clip reëmerged, the Times of London reported that Markle had made a deal with Disney to do voice-over work—one that was apparently signed before the couple announced their stepping-back plans. With the video’s resurfacing, we now had in hand, at least as far as we could tell, the deal’s animating spark, and a rare record of how things work at society’s highest echelon. In our attempts to hustle, we try, often with little success, to get a foot in the door. The rich and powerful and occasionally titled, meanwhile, are already inside the room. And, although they might need to flatter people, or network cravenly, or even occasionally embarrass themselves, at least the result is a major studio deal. In other words, stars are just like us, if we, too, were wealthy and influential.

There is sweetness, to be sure, in Harry’s promotion of Markle to Iger—he is clearly a loyal husband who is looking out for his wife. Moreover, it was announced that this particular deal with Disney would benefit a wildlife charity dedicated to the worthy cause of elephant conservation. Still, it is safe to assume that in the deals that will be cut, in what my colleague Rebecca Mead has identified as Harry and Markle’s possible transition from a title to a brand, the two are set to hit big. (In June, the couple applied for a trademark of the name “Sussex Royal,” which could potentially serve to brand hundreds of items.) While Harry follows his bride to her continent, much like Brits of eras past who have turned to America to make a killing (Charles Dickens, in his lucrative reading tours, not to mention the Beatles and the Stones and the Spice Girls), it will be curious to see how far this transition goes. As Trish Regan, a Fox Business Network host, told People magazine, the Duke and Duchess could stand to make hundreds of millions of dollars post-Megxit. “It’s important that they keep their brand intact,” Regan counselled bluntly, pointing to the pair’s “wholesome family image,” before offering some pertinent examples. “You can look at the success, for example, the success of the Kardashians, a different kind of brand, and you can look at the success of Jessica Alba and the Honest Company.” If Prince Harry and Markle solidify their brand in this manner—publishing a book, hosting a talk show, selling clothing or homewares or even cleaning products—it will surely not be long before they transform from British to American royalty.

Hector Bellerin is receiving high praise for this interview on social...