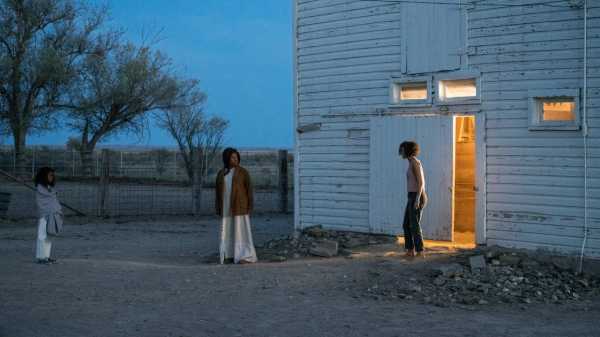 With a season of bombastic superheroism about to crash in, it’s worth mentioning a new film that’s remarkable for its modest, humanistic, and nuanced approach to the same theme: “Fast Color,” directed by Julia Hart, which opened on Friday, at a scattering of theatres across the country. It’s a science-fiction drama set in the American Midwest, in a dystopian near-future that’s afflicted by a long, unbroken drought, rendering water a precious commodity. There, a young woman named Ruth (Gugu Mbatha-Raw) is being pursued by government authorities, in the person of a scientist named Bill (Christopher Denham).

It’s soon revealed that Ruth is endowed with superheroic powers of a peculiar sort—the ability to disintegrate and reintegrate physical objects—and that David hopes to harness this power for the public good. But Ruth faces trouble of her own: first, the inability to control her own power, which leads to unintended destruction; second, personal difficulties that have led to her estrangement from her family. When the action starts, she is driving across arid terrain to a remote farmstead where her mother, Bo (Lorraine Toussaint), and her young daughter, Lila (Saniyya Sidney), live.

“Fast Color” is a superhero movie unlike any that I’ve seen from a major studio, in that the characters seem to have their feet on the actual ground rather than on a set. Hart’s direction emphasizes the physical immediacy of the drama—the effort that it requires and the danger that it entails. Ruth’s unhinged powers emerge in a scene as an intimate medical terror. But, when deployed at will, her powers—like those of the other women in her family—are conjured by way of special effects that blend a sense of wonder with a sense of possibility, even of ironic banality (as when the brilliant and earnest but impish Lila relies on them for some superheroic shoplifting).

Hart, who wrote the script with Jordan Horowitz, sketches a world diminished by its altered climate with a shivery dramatic specificity. (Checking into a motel at thirty-five dollars per night, Ruth is offered a half-bottle of water for twenty-six dollars, a full bottle for fifty.) Shelves of supermarkets and convenience stores are gappy; daily life is impoverished and constrained. It takes forethought to wash oneself and to brush one’s teeth, and rinsing out a cut is a minor crisis—which is to say that, in “Fast Color,” Americans live like many in the world do now, with unreliable and difficult access to water. What’s more, the situation appears to have overwhelmed the system to the extent that technological progress has been stymied; the sole advance in view is a kind of ersatz coffee that everyone drinks and no one likes. Amid this grim landscape, Ruth struggles to reach home. When she gets there, evading the government’s hot pursuit, old wounds are reopened and old mysteries unsealed, with curious, far-reaching implications.

In effect, “Fast Color” is a poignant family melodrama, anchored in long-standing troubles and festering secrets, in which superheroism is a bold conceptual leap that maps the trials and peculiarities of a single family onto the world at large. The movie offers superheroism as a largely private matter, before the hero becomes exalted in public consciousness and enshrined in legend. It’s a superhero movie that is unburdened with the quasi-scriptural weight of existing comic-book properties, and the narrow determinism of their bureaucratic management. It’s the rare superhero film that proceeds without a devotion to the spectacular that filters out, from the start, all the interest that’s generated from close attention to ordinary life.

On the other hand, intimate and personal drama, with or without superheroes, has clichés and conventions of its own, and “Fast Color” isn’t immune to them. The drama doses information as if with an eyedropper; the characters know much more than they say, and Hart uses withholding to stoke suspense—a strategy that constrains the direction and freezes out subjectivity (except in short flashes that respond literally to plot points). At times, I found myself yearning for a freer element of inner experience—which is within the reach of a low-budget science-fiction film (as, for instance, in “Upstream Color”). Which is to say that “Fast Color” is a provocative approach to superheroes but not a radical revision of cinematic form.

The film’s modestly budgeted, scaled-down mode of resistance to the homogenizing force of franchise development is reminiscent of that of science-fiction dramas of an earlier time—the nineteen-fifties, which were the heyday of low-budget, independently produced, often deliriously imaginative science-fiction films. That era foreshadowed current times in several relevant ways: studio productions were becoming ever more inflated, television was cutting drastically into the public’s movie-going habits, and political crises in the United States were both apocalyptic (with the threat of nuclear war) and hate-stoked (the ongoing enforcement of Jim Crow) in ways that major Hollywood studios were largely unprepared for and unwilling to confront. I won’t spoil “Fast Color” ’s good ending, but there’s a symbolic dimension to it that reflects a confrontation with present-day political crises of a similar sort.

One of the challenges of realistic and independent cinema is how to film daily life in the United States and its endemic and ambient political depravities without saying the name of Donald Trump—without reducing political conflict to sloganeering or overwhelming fiction with reporting and analysis that few dramatic directors are equipped for. One response is, again, fantasy; it’s why “Fast Color” is aligned with Jordan Peele’s “Us,” and also with projects by filmmakers in Europe who are struggling with the rise of the far right (including Bruno Dumont’s “Coincoin and the Extra-Humans,” Alice Rohrwacher’s “Happy as Lazzaro,” Serge Bozon’s “Mrs. Hyde,” and Ali Abbasi’s “Border”). It joins those and other efforts to make political cinema that relies on imaginative inventions to confront the realities of modern life.