Home Culture Fifty Years After Apollo 11, the View of Earth from the Moon... 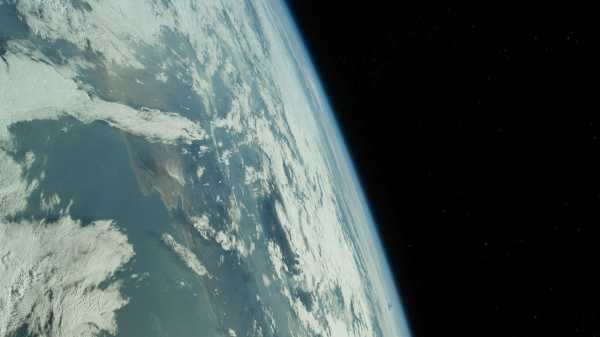 I saw “Apollo 11” in the Los Angeles suburb of Alhambra, sitting in an IMAX theatre with ten or so other freelancers and retirees who could see a documentary about NASA in the middle of a Thursday. The director and editor, Todd Douglas Miller, tells the story of the moon launch using archival footage, including a trove of 70-mm. film commissioned by NASA at the time of the launch. The film has no voice-over narration. Instead its story is relayed by the newscasts of Walter Cronkite and the radio transmissions of Edwin (Buzz) Aldrin, Neil Armstrong, Michael Collins, and their interlocutors on Earth.

The result is a visual museum about America in July, 1969, in which Aldrin’s famous 16-mm. footage of the lunar module approaching the surface of the moon is only a little more compelling than the thousands of picnickers who gathered at Cape Canaveral to watch the rocket launch, with their station wagons, cat-eye sunglasses, flowered bathing caps, Technicolor minidresses, and coffee percolators. I had never had any particular interest in Apollo 11, and I was surprised by how much its story moved me: the earth rises through a portal window on a spacecraft, an astronaut’s solar shield gleams with the reflected surface of the moon, the red and white stripes of the parachute attached to the landing module spread out against the baby blue of the sky.

The voyage of Apollo 11 was in a sense the execution of a beautifully scripted play: the protagonists had practiced so many times that after Neil Armstrong makes his one small step, his next remarks compare the reality of the moon’s gravitational pull to the simulation. Most of the scripted elements of this play try to Americanize a lonely rock in space, from the planting of the “lunar flag assembly” to Armstrong’s remarks that the moon “has a stark beauty of its own, much like the high desert of the United States.” Part of what I liked about the film is how it reclaims the wonder of human endeavor from the smallness of its patriotic recitations. Fifty years’ worth of Tom Hanks or George Clooney in space suits, old MTV commercials, and montages where the moonwalk is sandwiched between hippies dancing and the battlefields of Vietnam are somehow swept away, replaced by the lunar module rising from the moon’s surface, a tiny speck against its glowing cratered expanse. As E. B. White wrote, “It is traditional, of course, for explorers to plant the flag, but it struck us, as we watched with awe and admiration and pride, that our two fellows were universal men, not national men.”

No, what moved me was not national pride but a sense of comfort inherent in any narrative depicting competency and coöperation, of steps meticulously planned and then completed. There was once a room of cigarette smokers who were really good at trigonometry and aeronautics. They cheerfully sent men to the moon and got them back home without a single slide-show presentation by an ego-driven billionaire wearing a headset. The conversations over the radio are about going home for the night (“As the sun sinks slowly in the west the White Team bids you goodnight,” Mission Control says at the end of the day) and Ted Kennedy’s car crash at Chappaquiddick, which briefly dominates the news cycle as the astronauts are flying to the moon. One astronaut, the capsule communicator Bruce McCandless II, compares the spaceship entering into Passive Thermal Control Mode to dining in a rotating restaurant.

A few days after watching “Apollo 11,” I attended a media event at NASA’s Jet Propulsion Laboratory, in Pasadena. We were invited to hear an announcement, by the NASA administrator, Jim Bridenstine, about Donald Trump’s plans for the agency. The speech would be live-streamed from the Kennedy Space Center, in Florida.

In December, 2017, Trump signed the White House Space Policy Directive 1, the goal of which is to send Americans to the moon again, for the first time since 1972. (In the fifty years since Apollo 11, the propagandists have stopped taking their literary cues from Greek mythology, Shakespeare, and the King James Bible, and started drawing from Star Trek, namely Starfleet General Order 1, otherwise known as “the Prime Directive.”) Bridenstine filled in the details. Near-Earth orbit, he explained, will soon be the domain of the private sector, a transition that has been under way for years: “We’re talking about manufacturing. We’re talking about tourism. We’re talking about pharmaceuticals, maybe fibre optics.”

In near-Earth orbit, Bridenstine said, NASA will be “one client among many clients in a robust commercial marketplace,” relying on private companies for Earth-to-moon transport. He repeated variations of this phrase several times, like a mantra. I wondered what pharmaceutical companies would do in space, and imagined L.E.D. screens on the moon showing ads for treatments of eczema and depression.

With the robust commercialization of near-Earth space under way, NASA will next return to the moon using “commercial lunar-payload services”: SpaceX or Boeing or Lockheed Martin will land the next generation of astronauts on the moon. Bridenstine said humans could potentially return to the moon as early as next year, and described a future in which the moon will be the launch point for Mars. The moon’s polar ice caps, discovered in 2008, contain both oxygen to breathe and hydrogen for fuel. “It’s about having a sustainable human presence on and around the moon,” Bridenstine said, which means “landers, rovers, robots, and humans will have more access to more parts of the moon than ever before.” Trump’s twenty-one-billion-dollar NASA budget includes funding for a command and service module known as the Gateway, from which the landers and robots will dock and descend.

Most of the other attendees at the event were space enthusiasts, who had applied to attend as social-media correspondents. They included students, visual artists, a park ranger, and an aspiring astronaut employed by the Air Force. They wore NASA T-shirts and patches, and one even had canvas sneakers stitched with the NASA logo. They were diverse in age and heritage, and their enthusiasm served as a reminder that few, if any, government agencies are as popular or beloved as NASA.

The audience watched Bridenstine’s speech with dutiful attention, but its enthusiasm really emerged when we visited Mission Control, where data from deep space have been monitored continually since 1964, and the Mars Yard, where J.P.L. engineers test rover prototypes on a landscape littered with the rocks from the Mojave Desert. This was a group of people who had been watching NASA live streams for years—now they were sitting in the very chairs in which scientists had celebrated the landing of Curiosity Rover on Mars, in 2012, with hugs and cheers, in uniforms modernized from shirts and ties to matching blue polo shirts. From a glassed-in balcony, we observed the assembly of the Mars 2020 Rover by a small fleet of workers in white suits and surgical masks. One of them saw us and waved.

At the end of the Apollo 11 documentary, after Armstrong, Aldrin, and Collins have returned safely to Earth, Miller plays audio from John F. Kennedy’s 1961 speech at Rice University, in which Kennedy promises to land Americans on the moon within the next decade.

“But if I were to say, my fellow-citizens,” Kennedy said, “that we shall send to the moon, two hundred and forty thousand miles away from the control station in Houston, a giant rocket more than three hundred feet tall, the length of this football field, made of new metal alloys, some of which have not yet been invented, capable of standing heat and stresses several times more than have ever been experienced, fitted together with a precision better than the finest watch, carrying all the equipment needed for propulsion, guidance, control, communications, food and survival, on an untried mission, to an unknown celestial body, and then return it safely to earth, reëntering the atmosphere at speeds of over twenty-five thousand miles per hour, causing heat about half that of the temperature of the sun—almost as hot as it is here today—and do all this, and do it right, and do it first, before this decade is out—then we must be bold.”

Listening to this speech, I thought not about the moon but about the proposal for a Green New Deal. “This is going to be the Great Society, the moon shot, the Civil Rights Movement of our generation,” Representative Alexandria Ocasio-Cortez said in a speech last December. “That is the scale that this is going to require.”

In our national mythology, the moon shot stands for endeavor, futurism, technological advancement, and optimism. For Trump, the continuation of the myth of the moon shot will be a more long-term human presence on the moon. For the supporters of the Green New Deal, the gleam of futurism is not limited to flying machines and the colonization of celestial bodies but also applies to picturing new environmental realities and social arrangements on Earth. It is an imaginative plan, but also an urgent one. The United Nations International Panel on Climate Change has given us a time frame of a dozen years to take dramatic action, but the annihilation of our homes, food, livelihoods, and the landscapes and animals of the Earth we know has already begun. The Democratic leadership in Congress has yet to express support for the proposal, indicating that they think it naïve. As for the Republicans, many of whom have taken large donations from oil and gas companies, they spent recent congressional hearings on climate change chuckling about cow eructation. Neither response is bold, and, whatever their reasons, our elected leaders’ paucity of endeavor baffles and enrages me.

A few years ago, I read the science fiction novel “Aurora,” by Kim Stanley Robinson, a prolific author whose works combine elements of both social futurism and hard science fiction. This particular novel is about a multigenerational journey to an Earth-like moon in another galaxy, narrated in part by a benevolent all-knowing spaceship. The Earth-like moon, known as Aurora, turns out to be lethally inhospitable. The ship, which has started to acquire consciousness, puts the remaining crew into cryogenic comas and gets most of them home alive. Back on Earth, the returnees are received as cowards. Their pleas that—as the protest signs of students striking for action on climate change last week put it—“There is no Planet B” are ignored.

The dead-end plot of this novel was very satisfying. Filling space with more industry, trash, and advertising will not improve the future we create at home. In “Apollo 11,” a clip of the astronauts speaking to each other is played as they come ever closer to the moon.

“There it is. It’s coming up!” an astronaut says.

One Killed, Over 20 Injured by Firecrackers Across France’s North-East –...

Trump wanted to shoot migrants and build a wall guarded by...