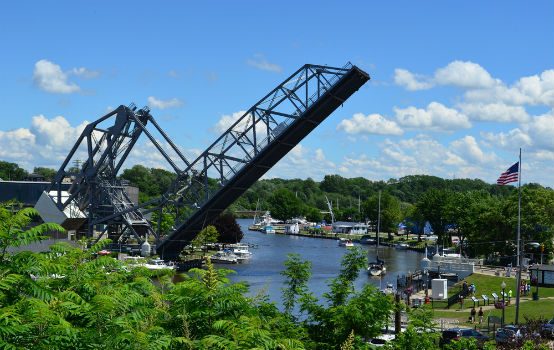 Editor’s note: This is the first entry in TAC‘s new series “The Great American Diary,” wherein our writers take a closer look at the varied and enriching places throughout our country that are too often ignored.

Sometime in the 1800s, the story goes, a bitterly cold winter caused Lake Erie to freeze over, forcing all the freighters into harbor. After weeks of cabin fever, one sailor decided to head into town to engage the services of a lady of the night. He selected a pretty young thing named Bula and took her upstairs, but it was so bitterly cold in the unheated boudoir that, before taking what he’d paid for, the sailor asked Bula whether she wouldn’t mind cuddling for a while to help warm him up. She agreed, and even offered to serve as the “big spoon.” So the sailor turned his Ash-ta-Bula.

As nearly as I can tell, my grandfather, whose father bought a cottage in Ashtabula in the 1920s that has stayed in the family ever since, invented this story out of whole cloth to explain how Ashtabula, a Northeast Ohio city of around 18,000 nestled against Lake Erie, got its name. A quick Google search reveals that, in reality, “Ashtabula” (pronounced “ASH-ta-BU-la,” never “ash-TAB-u-la”) comes from a Native American name that means “always enough fish to go around.”

This is not to say that my grandfather’s story is without truth. From the late 1800s until the late 20th century, Ashtabula was one of the busiest ports on the Great Lakes (it remains the 11th busiest as of 2012), and its harbor filled up with rough bars and whorehouses to serve the sailors on shore leave. Finnish and Swedish immigrants poured into work on the freighters that shuttled iron ore and other industrial goods across the lake. They brought their Lutheran Christianity with its distinctive Scandinavian flavor.

Messiah Lutheran Church, which I attend with my parents whenever I find myself at the family cottage, is one of about five Lutheran churches in Ashtabula and was founded in 1921 to serve Swedish immigrants in the area. For at least the first 10 years of its existence, services were conducted entirely in Swedish. Even today, a great many members of the congregation have surnames ending with the Swedish suffix “–sen.” This connection between the Scandinavian maritime labor force and the local Lutheran churches also lives on in the continued participation of Messiah’s clergy in the annual Blessing of the Fleet.

Today, most of Ashtabula’s Lutheran churches are associated with the Evangelical Lutheran Church in America, a liberal denomination that draws over half of its 3.6 million members from the Midwest. In fact, the ELCA’s current presiding bishop, Elizabeth Eaton, was pastor of Messiah from 1991 until 2007. Her ministry at Messiah was characterized, according to the church’s website, by major efforts aimed at “improving the troubled neighborhood” surrounding the church.

That this outreach was necessary points to how badly Ashtabula has suffered since the industrial declines of the 1980s. According to census statistics, between 2000 and 2014 alone, the city’s population fell by 11.7 percent; its median income is $12,000 lower than the Ohio average. Meth labs sprouted like weeds, and overdose deaths ticked upward. As a child, I remember diehard optimists trying to coin the term “Ashtabeautiful” in order to counter the more prevalent nickname “Trashtabula.”

In recent years, however, Ashtabula’s harbor has become a post-industrial success story. The neglected bars and brothels have been replaced by trendy coffee shops and restaurants like Rennick Meat Market, where Midwestern hipsters with tattoo sleeves serve dry-aged steaks and artisanal cocktails in a remodeled butcher’s shop. There’s also a local art gallery, an annual Wine and Walleye Festival, and a rush to build new hotels and condos. Meanwhile, freighters continue to steam under the harbor’s bascule bridge, which lifts up at one end using an unusual counterweight system. These picturesque improvements may not be sufficient to solve all of Ashtabula’s socio-economic issues, but they’ve certainly helped restore beauty and civic pride in a way that is accessible to everyone, not just the summer vacationers who populate the insular beach communities that make up Ashtabula’s Saybrook Township.

So far, this account has consisted of a series of broad strokes made up of statistics and anecdotes that I’ve gleaned over 24 summers in Ashtabula. For me, though, Ashtabula is not poverty or drugs, industrial decay or post-industrial rebirth. Many Ohioans have heard of Ashtabula, and most of them merely scoff at it as stereotypical “Hillbilly Elegy” country. But for me, it is simply paradise.

When I wake up, I can see the lake out my window. A short walk of half a block and 77 wooden steps takes me to the beach. There, the world shrinks down into a single smooth arc of sand and water, bounded on one side by a long, jutting pier and on the other where the curve of the land comes to a point. At night, the setting sun projects a golden pathway across the water, and all the neighbors gather on the embankment with their dogs and wineglasses to look out over the lake as if they might just decide to step out onto that shimmering strip of water and walk straight out until they disappear into the pastel sky. In those moments, I’m reminded of the old hymn that imagines all the saints “casting down their golden crowns around the glassy sea.” Sometimes, in the sunsets and thunderstorms, I swear I can almost see the Spirit of God hovering over the waters. Then the sun slips below the horizon, extinguishing itself only to be rekindled in the morning. Many days are spent almost entirely at the beach with only a quick shower and a hasty dinner to separate the long day of swimming and sunbathing from the boozy late-night bonfire.

There’s never much incentive to leave the reservation. Just across the road there’s a pretty good diner and a convenience store that has a fully stocked beer cave and doesn’t look too closely at anybody’s ID. When a change of pace is needed, it’s a 15-minute drive to Geneva-on-the-Lake, a long avenue lined with bars, arcades, ice cream stands, mini-golf courses, and ’50s-themed burger joints and once a favorite vacation spot of John D. Rockefeller and Henry Ford. If bad weather produces acute boredom, there’s always the movie theater at the largely defunct Ashtabula Mall, or—more likely—cards, drinking games, or movie nights at somebody’s cottage.

From the time I was a child, my father, who inherited the cottage from his father before him, told me that I was never to give it up under any circumstances. If I ever had to choose between losing my house or selling the cottage, I would be fully expected to sell my house to save the cottage. I was also forbidden from marrying a girl who didn’t love the lake or dividing the cottage among multiple children. Like the landed estates to which Edmund Burke likened his country, the cottage is “an entailed inheritance” to be received reverently from my ancestors and passed on, intact and improved, to my descendants. Our beach community has also provided me with a ready-made set of lifelong friends, all of whom stand to inherit their cottages someday, none of whom will ever be taken from me by the severing power of circumstance.

Even as Ashtabula taught me a conservative love for place and continuity, however, it was also tempting me. Long school years among sheltered Christian peers juxtaposed with long summers among my worldly lake friends left me unsure of my own identity for much of my life, and all those bonfires instilled in me an affinity for alcohol that grew to problematic proportions before I finally got it under control. Perhaps worst of all, though, I became dangerously content doing absolutely nothing.

This is not to say that earthly paradises are evil, only that they must be approached with caution. In heaven, there will be no confusion, but community; no drunkenness, but the eternal intoxication of the beatific vision; no idleness, but active service and worship. It’s easy to choose the imperfect earthly paradise over the perfect heavenly one. We must be taught to want what is best, and only when we truly want it will we be worthy of it.

In On the Road, Jack Kerouac briefly mentions Ashtabula, and Bob Dylan slant rhymes it with “Honolulu” in a list of places where he plans to seek his lover when she leaves him. Like me, they were both seeking something that couldn’t be found in Ashtabula—or anywhere else in this world.

Grayson Quay is a freelance writer and M.A. student at Georgetown University.

Which nations have dominated Champions League, European Cup since it was...

The resolution vote showed Democrats are unified on their impeachment inquiry

Observe the Earth in 360-Degree-VIDEO From International Space Station