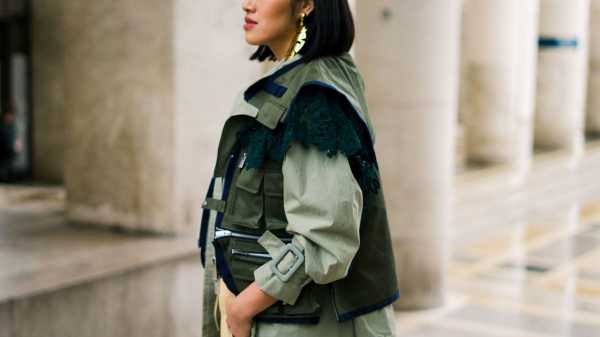 Last week, a strange shard of fashion marketing pierced many thousands of bubbles, after Nate Bethea, a journalist and U.S. Army veteran, excavated a thirty-second ad for Grunt Style, a clothing brand pitched at soldiers, sailors, and Marines. The year-old spot—which, embedded in Bethea’s tweet, has racked up almost seven hundred thousand views, at this writing—opens with a police officer in riot gear facing a mob of protestors whose signs rage with vaguely anti-hegemonic feeling. The cop is offended by their hoisting of inverted American flags, and he is triggered by the threat that Old Glory will burn.

On the soundtrack, while a glassy voice lifts the third verse of “America the Beautiful,” with its praise “for heroes proved in liberating strife,” the hero flashes back to moments in his past: as a soldier saluting the coffin of a fallen brother, as a high-school football player standing for the anthem, as an unsupervised child watching TV while a flag is raised in the ruins of the World Trade Center. We snap back to the present, where Cortez—that’s the name on the back of the football jersey of this conquistador—flicks down an eye shield and snaps a truncheon to the ready. Not unlike the L.A.P.D.’s Lieutenant Detective Christian F. (Bigfoot) Bjornsen in “Inherent Vice,” he brightens at the prospect of cracking some long-haired heads. A slogan soars up: “This we’ll defend.” The ad, with its contempt for political dissent, its lust for power, and its visceral blood thirst, goes down like an appeal for autocracy.

A grunt, in military slang, is an infantryman. Grunt Style, which was founded in 2009, by a former Army drill sergeant named Daniel Alarik, is “the lifestyle brand of America’s new warrior class,” in the phrasing of Forbes magazine. You can go to gruntstyle.com to order a smart all-cotton T-shirt, licensed by the United States Marine Corps, that gives the Helvetica-quartet treatment to “Puller & Butler & Daly & Basilone,” and you can go there to buy a pair of shoes suitable for an amphibious raid.

The Web site and its wares are only occasionally as grotesque as the ad. True, a T-shirt graphic replacing the stars and stripes with bullets, in celebration of the Second Amendment, would work as an illustration for an op-ed advocating its repeal, but that stuff’s a dime a dozen. Yes, the product descriptions occasionally stumble into the exploring homoeroticism of, say, “Top Gun,” “300,” or anybody’s Parris Island boot-camp montage; there is currently a final sale on men’s nylon shorts, “the damn daisy dukes of freedom . . . . If you don’t think that the [olive drab] ones fit with your girly complexion, take a look at the black.” (Meanwhile, a T-shirt for women enables the wearer to objectify herself as an M.R.E. cherry pie, in the Warrant sense of the pastry, “hot, moist, and tasty.”) But the wares are, by the standards of tacky T-shirts and toxic masculinity, well made, and even, on their own terms, stately. Not all of the products are directly on the theme of military service or American power. A St. Patrick’s Day T-shirt, with the stem of a shamrock forming the stem of a vowel in “EAT A DICK,” is, in the context of the crowd that will be foaming around Fifth Avenue on March 16th, somewhat subdued. One can imagine a Brooklyn yoga mom donning a NamaSlay T-shirt, with its lotus leaves and combed cotton.

And yet, the branding is studded with a particular kind of trench humor. To get on the mailing list of Grunt Style, you type your e-mail address into a field labelled “Enlist & defeat ISIS.” In a variation on L. L. Bean’s old lifetime-return policy, a “beer guarantee” promises that Grunt Style will replace merchandise damaged by “tears, holes, loose threads, beer stains—even blood stains from defending the American Flag.”

What is most interesting about Grunt Style, about its success selling aggro mufti to people who risk their minds and bodies in uniform, is that it has emerged in an era of civilians who are growing ever more extreme in their adoption of military clothing. The buzzword for the upcoming season is “warcore,” a term coined by Vogue in the wake of the Spring 2019 menswear shows. It describes the escalation of military chic to “tactical” fashion—“what’s new is the sense of survivalism,” the Vogue writer Steff Yotka explained. “The buzzy streetwear brand Anti Social Social Club is producing actual riot shields.” Last week, explicating the term, the copywriters at Mr Porter, a luxury menswear site, suggested a zip-pocket Heron Preston vest as a restrained alternative to a grosgrain-trimmed flak jacket by Junya Watanabe, saying, “It’ll be useful for carrying all of your essentials when the revolution inevitably comes.” 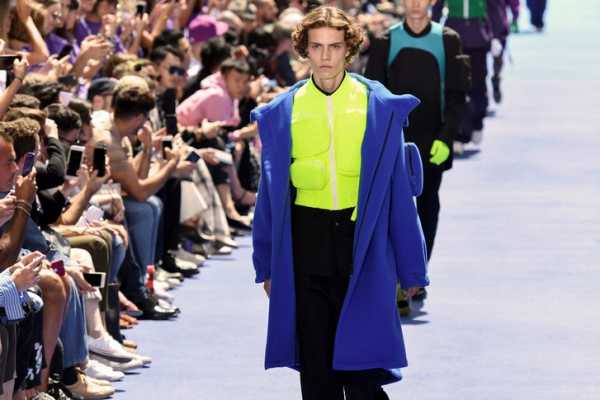 The buzzword for the upcoming season is “warcore,” a term coined by Vogue in the wake of the Spring 2019 menswear shows, which included a fluorescent-yellow tactical vest by Louis Vuitton.

Menswear has been trending this way for a while; I distinctly recall browsing Saks Fifth Avenue two years ago and checking the tag on a reversible Letasca vest to see if it was, as its cut and details insinuated, made of Kevlar. The sales associate called it “sick, sick, siiiick.” She happened to be diagnosing the new culture of dressing to suppress the enemy and to withstand cataclysm—a sartorial expression of epidemic P.T.S.D. Now the streetwear scene is a hot zone. According to the Times, Lyst, a fashion-search platform, reports a thirty-eight-per-cent rise in searches for camouflage, a category including a pair of Off-White cargo pants, designed by Virgil Abloh, the hot designer of the moment, who recently outfitted Bella Hadid in a deluxe gilet jaune of a fluorescent-yellow Louis Vuitton vest.

Your trench coat, your chinos, your Father’s Day necktie—your closet overflows with gear that was originally worn by stout patriots, fearful conscripts, and paid killers. But this warcore thing is new. We are a long way from 1996, when the critic Suzy Menkes, writing in the Times about couture camouflage, deconstructed khaki, and crypto-fascist tailoring, could correctly say that “the linkage of fashion with war is problematical” and reason that fashion’s “raiding of blood-soaked references” might “seem crassly exploitative.” Once upon a time, fashion only osmosed military looks after they had outlived their functionality. Now, in a time of endless war, heedless consumption, and great social stratification, all bets are off. Not too many of the people buying a nylon “mini military chest rig” from Alyx know the people who actually use military chest rigs.

If there’s irony in that, you’ll have to identify it for yourself. My own irony meter was damaged, perhaps permanently, by my prolonged contemplation of a Grunt Style graphic T-shirt that appropriates an anti-imperialist ditty from “Team America: World Police.” Behold the “AMERICA, F*CK YEAH” tee, now marked down to $17.76.

VE Day 75: Why Eisenhower Overruled the British and Let the...