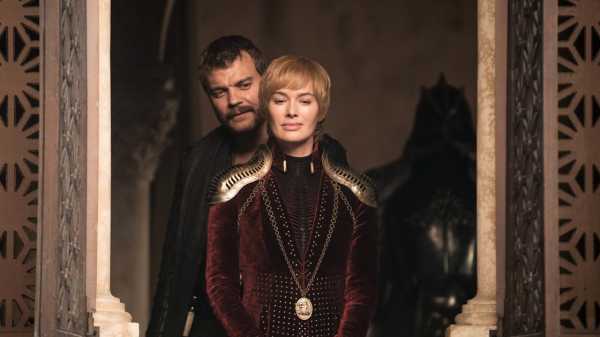 Oh, “Game of Thrones,” you charming sadist. I’d hoped that the episode after “The Battle of Winterfell” and its shattering of zombies would begin with “Ding, Dong, the Witch Is Dead” joy. Instead, it began funereally, then segued to revelry, then to fireside unbuttoning, and ended not only with horror but with broken hearts across the realm. Tell the old gods and the new that I’d like to register some complaints.

As the episode begins, Winterfell mourns the fallen, especially the Mormonts, Beric Dondarrion, and Archie Andrews—forgive me, that’s Theon, looking very “Riverdale” in death. Jon bellows a eulogy; torches in hand, he and Dany share a look that says, Look, our relationship is fucked, but right now we’ve got some pyres to light. The conflagration is gigundo; to her credit, Dany does not show off by wading into it and surviving. But she makes a scene in the mead hall, where the celebrations have begun, and where Gendry is looking around for his boo. As he walks by, Dany announces his parentage—with a vaguely threatening How dare you be the son of Robert Baratheon? vibe—and then makes him the lord of the Baratheon stronghold. Bastard no more! Davos Seaworth yells, “To Lord Gendry Baratheon, of Storm’s End!” (Later, he grouses amusingly to Tyrion about the mysterious Lord of Light: “We fight his war and win, and then he fucks off.” What did he want? I love Davos. I may see about ordering an onion-sigil flag.)

Elsewhere in the hall, Brienne puts her hand over her goblet—none for me, thanks—and Jaime removes it. These two have a lot of hand stuff. “We fought dead things and lived to talk about it,” Jaime says, using the oldest line in the book. “If this isn’t the time to drink, when is?” Bran is partying Bran-style, by quietly sitting away from the crowd, saying things like “I don’t really want anymore.” Dany makes a toast to “Arya Stark, the hero of Winterfell!”—it’s about damn time! Tormund, after insisting that vomiting is celebrating, drunkenly praises Jon while sloshing a wine-filled ram horn, and Dany watches with jealousy. Mind-bending music plays, implying that she’s freaking out that these happy fools won’t bend the knee, and, possibly, that she wants to murder everybody. Thankfully, Varys peers at her suspiciously.

Tyrion’s drinking game—a proto-“I Never”—returns, swiftly revealing that Brienne is a virgin. She leaves, and Jaime follows; Tormund is randily heartbroken. But, as in John Hughes movies, the lovable sidekicks (Pod, Tormund, and, nearly, the Hound) pair off with various deus ex sexinas. Sansa approaches the Hound for a chat; she’s been sharing meaningful moments with weathered old souls in each episode. He tells her that he could have saved her from Ramsay and Littlefinger if she’d left King’s Landing with him. “Without Littlefinger and Ramsay and the rest, I would have stayed a Little Bird all my life,” she says. Few women would serenely credit their personal growth to a manipulative whoremonger and a sadistic rapist; I might have written the line differently—and, while I’m revising, all that rape.

Gendry finally finds Arya, who’s practicing her archery—“I am celebrating!”—and tells her his news. “I’m not Gendry Rivers anymore,” he says. He kisses her, kneels, declares his love, proposes. She is affectionate, but says, “That’s not me.” Respect, Arya, but oof! Just figure out something unconventional, you guys. Gendry looks sad, I look sad, and Arya keeps shooting her arrows. (In Seasons 1 and 2, they’re awfully cute together, despite the fact that she looks about eight. Still, age-wise, they’re less creepy than, say, Emma Woodhouse and Mr. Knightley—and there’s a lot of valor between them.)

Speaking of which, Jaime knocks on Brienne’s door. I’m fainting in all directions. He seems curious about this virginity situation; I’m afraid to watch. I’m anxious about how Brienne’s wide-eyed awkwardness might interact with Jaime’s hard-won personal decency. They begin with flummoxed hearthside blouse-unbuttoning, followed by an abrupt shark-faced makeout. I’m rattled, but rooting for them.

In their own fraught boudoir, Jon and Dany talk of Jorah Mormont, and of love; they kiss but then seem to remember they’re related, and that she’s paranoid about the Iron Throne. Dany attempts to make Jon swear to secrecy about his parentage; his squinty eyes are uncomprehending. But Dany—his word! How can he betray it? “You are my queen,” he says. “And they are my family. We can live together.” Sure. “We can,” she says. “I’ve just told you how.” Varys and I agree: she might need to be murdered.

In the war room, tensions are high around the table map. How to destroy Cersei but not all of King’s Landing? Jon wears a pained expression, which, at this point, might just be his face. However they do it, Sansa would like to allow her exhausted armies to rest for a goddam minute first. Dany furiously rebuffs this idea; Jon says they’ll do what Dany wants. Jon is quickly becoming a jive turkey. Er, Jon—a word?, his sisters say. At the weirwood tree, with Bran tagging along, Sansa and Arya respectfully remind Jon that they don’t trust Dany, and that the four of them are “the last of the Starks.” There’s a pregnant pause, like Jon’s got some familial statements to make.

“It’s your choice,” Bran pipes up. It’s fun having an all-knowing sibling to goad you from the sidelines. Jon swears them to secrecy, pre-bean-spilling; Sansa scoffs. Then he makes Bran tell them his news—and the scene ends! We don’t even get to see Arya and Sansa learn that Jon is their cousin, and that their father wasn’t a cheater, or that their poor mother was made to suffer for a lie. I would have happily surrendered several minutes of staring between Cersei and Tyrion—a stare-off that occurs later in the episode—to see this revelatory moment get its due.

As the armies head to King’s Landing to knock Cersei off the Iron Throne, Jaime will hang back, avoiding a conflict-of-interest scenario, and Brienne will stay, too, to protect. I’m into this—it reminds me of the end of “The Big Chill,” when the two nutty ones decide to stay upstate together for a while and just see what happens. “I’m happy that you’re happy,” Tyrion says to his brother. “I’m happy that you finally have to climb for it.” He’s excited to make tall jokes. Their conversation is interrupted when Bronn comes in with the ol’ crossbow and cheerfully calls them a pair of gold-plated cunts. He wants money from some Lannister, at some point. Hang on: Hasn’t he heard their motto?

Arya and the Hound have a moody conversation on horseback, each wandering lonely as a cloud and dreaming of vengeance; Sansa watches dragons fly as Tyrion asks why she’s determined to “dislike” Dany. I’m annoyed: it’s not a catfight, pal. Worse, four sane and lovable characters are bidding farewell: Tormund heads north, after telling Jon, “You weigh as much as two fleas fucking”; Jon tells him to take Ghost (!); and Sam and Gilly—nooooooo!—say goodbye, too. Gilly is pregnant, and Sam starts explaining why. “I’m sure he knows how it happens, Sam,” Gilly says. I’ll miss them all, and am hoping that they swoop in later, with northern wild men, canine teeth bared, or bookish suggestions to save these loons from themselves.

At this point, the episode takes a nosedive, and that nosedive’s name is Euron Greyjoy. As usual, he’s leading a fleet of ships, waiting to ambush his enemies. Leading the opposing fleet, Grey Worm and Missandei, holding hands, smiling, and looking gorgeous, enjoy their last happy moments on this godforsaken television program. Euron, the Wile E. Coyote to Qyburn’s Acme, has a deck-mounted arrow-shooting machine, which he shoots at Rhaegal, who cries out in agony and falls into the sea. At first, I thought this was a dream sequence. It wasn’t! Dany, in a rage, bears down on Euron, but, mysteriously, chooses to dodge arrows and yowl instead of Dracarysing his face off. Next, Euron shoots up our heroes’ ship. After a startling shot of underwater Dinklage, the gang washes ashore (even Varys, sputtering), sans Missandei. Cersei has her. She’s also convinced the too-eager-at-all-times Euron that she’s pregnant with his baby.

After learning that things are hitting the fan in King’s Landing—what did he think was going to happen?—Jaime leaves his fur-blanketed bedchamber and saddles up his horse. Brienne races after him. “You’re a good man and you can’t save her,” she says. He disagrees—“She’s hateful and so am I.” He gallops off; she weeps; I glower. Maybe I’ll start writing fan fiction, in which these people are true to their best selves.

In the final, horrible scene, a face-off: the Grey Worm-and-Dany brigade versus Cersei and a castle of jerks. They’ve got Missandei front and center on the ramparts and Mount Clegane nearby. Cersei has her wine-goblet smirk but no wine goblet. Tyrion approaches the castle, gazing up at Cersei and her elaborate shoulder armor. “I know you don’t care about your people,” he begins, off to a good start. “They hate you and you hate them.” Then he tries to appeal to—get this—Cersei’s love of children. It does not work. Missandei’s last word, bless her, is “Dracarys.” Somebody had to say it. Next week: hellfire, and a possible Queen of the Ashes.