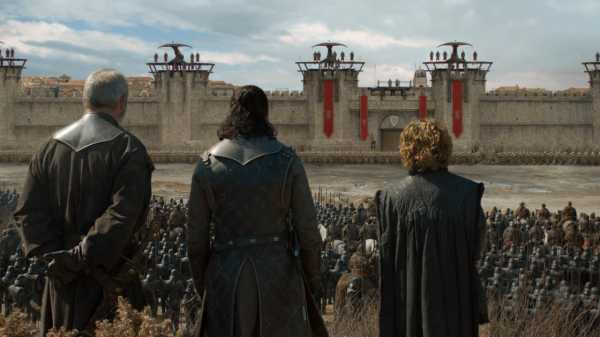 The final season of “Game of Thrones” keeps reminding me of a certain Magnetic Fields lyric: “There’s an hour of sunshine for a million years of rain, but somehow that always seems to be enough.” Recently, on our beloved breastplates-and-dragons program, the sunshine is narrative satisfaction, the rain is enraged disbelief, and the proportions feel off. For every minute of Arya stabbing the Night King, or of Tormund Giantsbane sloshing his wine horn around the Merriment Hall, we have a million years of exquisitely wrought character arcs being shattered into ice cubes and forgotten about, recently deflowered and sobbing in a courtyard, unceremoniously flambéd on the shores of Dragonstone, or vanquished by falling rubble. By the end of last night’s episode, the series’ penultimate, we managed to stagger out of that rubble, and might have hoped to gallop off on a white horse and get the hell outta there—to take a bath, regroup, maybe watch a little “Barry.” But only Arya got to do this, and we were left to stew and tweet.

The “previously on” clips reminded us, via Tyrion at the strategy table, that our objective, going in, was to remove Cersei without destroying King’s Landing. Ha! As the episode begins, Varys, ever the beacon of sanity, is writing a letter containing phrases like “Eddard Stark” and “true heir to the Iron Throne,” his ink glossy and his penmanship exquisite A.F. Who is Varys writing to? The Iron Bank? The Citadel? Whoever’s in Dorne, c/o General Delivery? The Dragonteam is brooding about Dany—she’s holed up, not eating!—but Varys has bigger fish to fry. (The realm.) He warns Jon Snow that she’s up to no good: they “both know what she’s about to do,” and it ain’t pretty. This much is obvious, but Jon, of course, is suspicious of Varys. Varys tells him that all he’s ever wanted is “the right ruler on the Iron Throne”—I’ve been rewatching the entire series and I can confirm that he talks about it constantly—and that ruler, he says, is Jon. Frankly, Varys, at this point I’m not so sure. “She is my queen,” Jon says, huskily, being an idiot.

After a quick, silly conversation with Tyrion in Castle Grayskull’s war room, Dany, annoyed at everybody for spreading Jon’s parentage secret around, including Tyrion and Jon, decides that Varys, a betrayer according to Tyrion, must go. Soon enough, our heroes to zeroes are out on the beach, glum, with torches and a grim agenda. Even Drogon seems depressed. Varys says, “Goodbye, old friend,” to Tyrion—generous!—and gets dracarysed. Drogon stalls for a bit, grunting, and I briefly hope he’s run out of accelerant. He hasn’t. So much for the Targaryen restoration.

After a Dany-Jon hearthside snuggle-up involving whispers about betrayal—Dany says that Sansa “killed Varys just as much as I did” (hmm; maybe not quite as much)—Dany complains that politically, she is less loved than feared. Huh. Jon says he loves her: she will always be his queen! That will fix it.

“Is that all I am to you? Your queen?” she says. No, you are also my aunt, he could respond, and also a real pain in the neck. This show! What once seemed fun is becoming increasingly problematic, like Joe Biden.

Tyrion tries to persuade Dany not to burn up King’s Landing, which is as useful as trying to persuade Cersei to not senselessly murder zillions, which he attempted last week. Next, he appeals to Davos Seaworth, oniony hero. “You’re the greatest smuggler alive, aren’t you?” he asks. My hope is that Varys has escaped through a trapdoor in the sand, the way Margaret Hamilton elevatored her way out of the Wicked Witch’s various smoke, fire, and melting situations, and that he’ll get smuggled to Essos, to command that herd of war elephants we’d heard so much about. No such luck. Tyrion wants to smuggle Lannisters, of all things.

In King’s Landing comes the destruction we’ve been expecting: part unholy “Mission Accomplished,” part “That was some weird shit.” It begins charmingly enough: Arya and the Hound arrive, full of moxie and big dreams. “I’m Arya Stark,” Arya tells a soldier. “I’m here to kill Queen Cersei.” Hmm, he seems to say. I need to talk to my supervisor.

In a tent, Jaime and Tyrion have a touching who-knows-what-tomorrow-brings talk that recalls similar conversations in Season 4, when Tyrion was charged with murder and Jaime, stealthy mensch, was his only relative who didn’t want him dead. “If not for you, I never would have survived my childhood,” Tyrion tells him now. “You were the only one who didn’t treat me like a monster.” Tyrion tries to get him to agree to take Cersei to an escape dinghy he’s cooked up with Davos—a dinghy whose emptiness, we know, will break his heart. (Tyrion seems uncharacteristically naïve this season.) Jaime says he supposes he’ll die soon. On the upside: “Escape.” Yikes. There’s much talk of bells ringing, which will mean that the city has surrendered; for us, this can only mean that we will hear some bells, and that they will toll for mayhem.

Action! Euron, on one of his stupid ships, greases up a Qyburn murder machine. Archers scoot around the castle ramparts; townsfolk take cover; Arya and the Hound and Jaime bop along all innocent-like. (He’s put a glove over his magic gold-plated hand, for anonymity.) The armies stare at each other, dead-eyed, as Cersei surveys the field from her imperial glower station. At sea, Euron sees a dragon overhead and starts shooting. Might I suggest using fire this week, Dany, in addition to just flying straight at your assailant? She does, and it’s delicious. I may be sick of Dany, but I am not sick of her dragon burning up Euron’s attempts at victory.

In the quiet battlefields, sounds of distant fireballs; an explosion inside castle walls; a dragon overhead. The Unsullied attack, and we cut between several kinds of mayhem: horseback, dragon-burning-city, immolation of innocents, calm tyrannical rule from on high. Tyrion ambles placidly through the noise and waste. Cersei tells Qyburn that the Red Keep won’t fall, but he’s not so sure, your grace. Jaime scurries through various alleyways and runs valiantly Cersei-ward, making me sigh like Jon Snow. Drogon lands on a turret and caws, flummoxing the masses. Soldiers drop their swords in surrender. Jon exhales soulfully. The bells, people cry. Rock the bells!

The bell-ringing: Cersei does not like it. Dany, floating on Drogon, a bit of ash on her cheeks, like the chimney sweeps in “Mary Poppins,” doesn’t, either. She’s got a rampage to continue! Tyrion looks up at her, thinking, Ah! Maybe this is what Varys was talking about? Dany and Drogon torch the city, buildings and people alike, and Jon wonders, Maybe my Queen didn’t hear the bell? Hey, Aunt Daenerys! As the fighting resumes, brutally, Cersei looks out her window, like, I shall stand here calmly looking regal, if slightly wide-eyed, as this dragon fucks up my town, just as I did when I blew up the Great Sept of Baelor and my boy-king son tipped gracefully out a window to his death. Dignity: always dignity.

Jaime makes his way to the landing, to check for the dinghy, but Euron is lurking about in the water, being irritating. After some banter on the beach—“I fucked the Queen!” Euron cackles—the world’s last remaining Cersei enthusiasts begin fighting, quite stabbily; Euron wants to be “the man who killed Jaime Lannister.” He gets close: both men skewer each other, though Jaime walks away alive. (I’m going to see about Qyburn making him a gold ribcage.) Euron, annoying to his last breath, smirks at a blue sky.

Inside, the Hound and Arya have landed on Cersei’s hilarious floor map. But now the Hound, looking up at a dragon through collapsing castle walls, is feeling protective of his mentee. You want revenge? he says. (Well, revenge costs.) You come with me, you die here, he tells her. It gives her something to think about as he heads off to murder his brother. “Sandor,” she says. Aww! His name! “Thank you.” Off she scoots.

As the castle crumbles, the Hound finds the Wine Queen and her creeps—Qyburn, Mt. Clegane—in what may be the most exciting staircase encounter since Season 3 of “Grantchester.” But it turns out to be gross and unsatisfying. Qyburn unceremoniously dies, via the Mountain’s crushing his head. The deaths of intelligent, rational people on this show—your Tywins, your Qyburns, your Varyses—create a special pain: even if they’re scumbags, you’ll miss their competence.

Cersei, sensing more head-crushings to come, politely takes her leave as the Clegane brothers begin their staring contest. She ends up on her floor map, crying alone—but guess who shows up in a dimly lit corner, fresh off some Euron-slaying. At long last, Cersei shows Jaime some kindness, and a bit of g.d. gratitude. “You’re bleeding,” she says. But we have found narrative cohesion, my love.

Back on the staircase, the Mountain removes his sanity-preserving (our sanity) Vader helmet. (Out in the streets, Arya, also helmetless—the Starks’ hair seems to spare them from all manner of head discomfort, except decapitation—tries to protect some townspeople.) The Mountain does his patented Oberyn Martell eyeball maneuver—the old poke-n-squish—but the Hound stabs him through the head, at which point the Mountain somehow extracts the sword that has been run through his head. The Hound is like, Oh, come on, how am I even seeing this? Not just because it’s impossible but also because my eyes should be rattling around in my neck somewhere! He shoves the Mountain off the crumbling tower, and both of them plummet into a raging fire. So they should be gone for a minute or two.

I’ll say this: things have livened up in King’s Landing. I’m glad that Cersei dealt with some dust, grime, blood, and emotions beyond peevishness. I was hoping for a niftier dénouement for Cersei and Jaime: maybe a “Hang on—Euron? I can’t believe you fucked that guy!” and a “Wait—are you even really pregnant?” before Arya showed up to murder Cersei, possibly wearing Joffrey’s face, or Tommen’s, or any number of Freys—I’m not fussy—leaving Jaime intact. But no: Arya has chosen altruism over revenge, and possibly getting crushed by rocks. Pff. Inside the darkened castle, Cersei and Jaime are alone. “Nothing else matters,” he says. “Only us.” “The Rains of Castamere” plays amid increasing amounts of dragonrubble, and our attractive incest-lovers—one set, anyway—disappear in a cloud of dust and darkness.

Outside, it’s quiet like nuclear winter, and snowing particles. Arya has survived, but she looks like Alice Cooper. (Blood, ash, bad vibes: welcome to my nightmare.) She stares at various fires and charred lumps—but lo, a white horse! (Equus ex machina?) Maybe she’s dead and this is a Westerosian “What Dreams May Come.” Maybe all of us are. She gallops through the smoldering ruins, leaving us behind, frowning. Next week: the Queen of the Ashes is startled to find that the Iron Throne has melted, and Bran goes on one last warg.

A Painting of the Sky Every Sunday, and the Art of...

Sweden scouting report: All you need to know about England’s World...