Home Culture Gay Pride and Stonewall, Through the Eyes of Fred W. McDarrah | 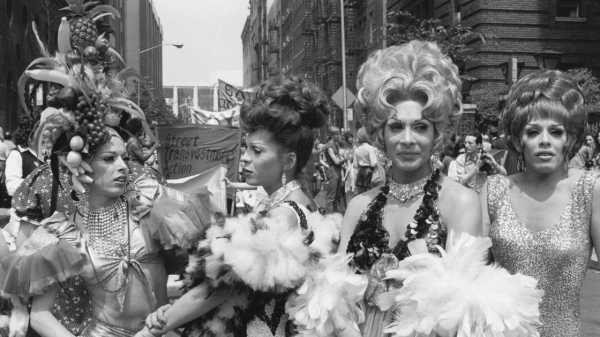 It is a dubious honor to write about Fred W. McDarrah—dubious because I don’t want him to be gone. I’d rather write about the work he would still be doing now if he were around, covering his territory, which is to say Manhattan, specifically downtown, which, if you squint, you can still see through his eyes. But you have to squint hard. Fred’s downtown had nothing to do with chain stores and corporate raiders and their spiritually and physically embalmed wives. His photographs showed a maze of streets and ideas snaking their way down to the Hudson River, or the East River, streets filled with so many stories that I still see in black-and-white because of his pictures, which also show stretches of unaccounted-for space, like some movie version of the West. But that was long ago, before Manhattan started to heave at its center, as it struggled to contain many people and institutions that would have disturbed Fred, a wanderer who loved New York, but a New York based on creativity and freedom rather than commerce. 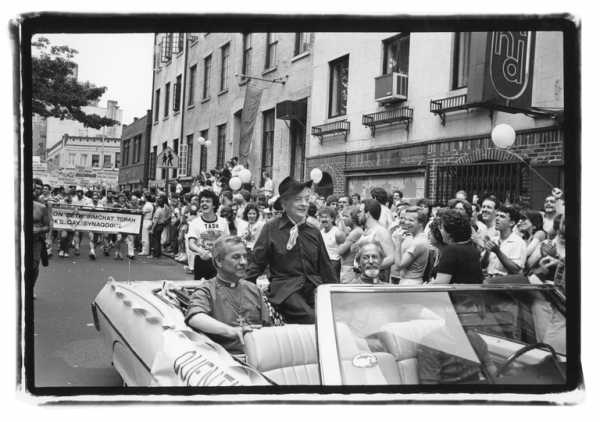 The writer and actor Quentin Crisp, center, rides in the Gay Pride Day parade, June 27, 1982, as it passes in front of the old Stonewall Inn.

Fred, who died in 2007, was an urban cowboy. He wore beautifully shaped and well-cared-for cowboy boots. The boots were part of his habitual outfit: bluejeans and a denim shirt, the neat and efficient costume of the dedicated working man. In the winter, sometimes Fred wore a leather or denim jacket to complete the look, but mostly when I think of Fred I see him taking his jacket off and rolling up his sleeves to get to work as the first-ever picture editor and staff photographer at the Village Voice (where I succeeded him in the picture-editor job). 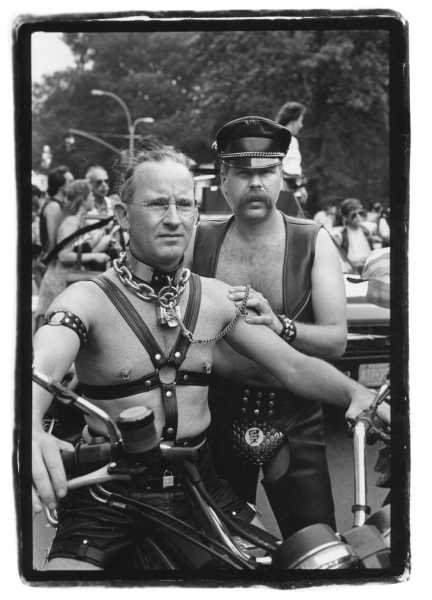 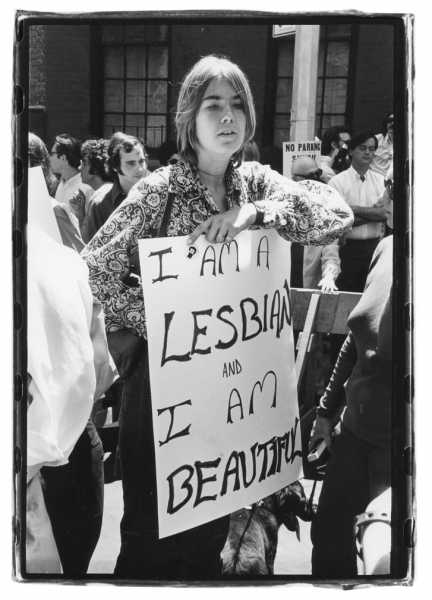 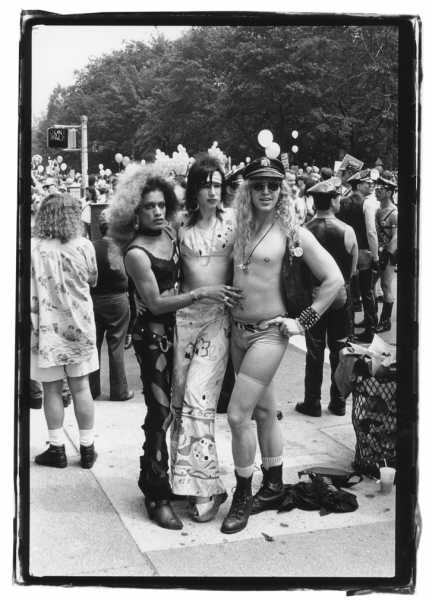 Fred covered everything, but he first became known for capturing the start of the Beat scene, in New York. It was a new world, filled with that era’s youth, all those cigarettes and tough attitudes that were out of step but somehow O.K. with the immigrant families that raised their kids in the tenements near the Café Wha? and what not. Those immigrant families cooled themselves on stoops in the summer as the Beat youths rushed the avenues in pursuit of another hootenanny, intent on getting everywhere fast, following sounds. Fred saw the artists who helped define the time—Jack Kerouac and Bob Dylan—as poets scratching lyrics and stories out of the New York air. What always struck me about Fred’s early black-and-white pictures is how verbal they feel, but not in the corny sense in which every picture tells a story. What we see in so many of the pictures from that time are people talking and telling stories, a fusillade of words caught in space, ideas and jokes that may come to nothing or everything. The point is: one of the great things that Fred captured in his historic work is the exchange of ideas among those who were shaped by thinking and by art—the belief that, if all of the world’s problems could not be solved in conversation, then they could be exhumed and examined. 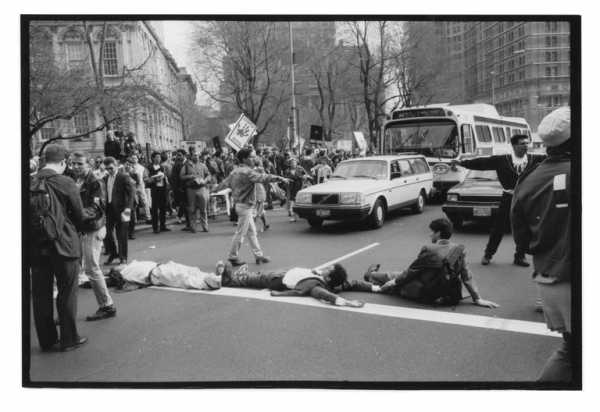 ACT UP demonstrators stop traffic at the Brooklyn Bridge, March 28, 1989.

Fred was born in a hard place. His father, a depressive, was barely able to function, and so the care of the family fell to Fred and his brother early on. Whenever he talked about his youth, or his father in particular, a shadow crossed his face; those were the only times I ever saw Fred remotely unhappy. He never elaborated on where he was raised, and you knew not to ask: the pain in his eyes was real and deep and fresh. 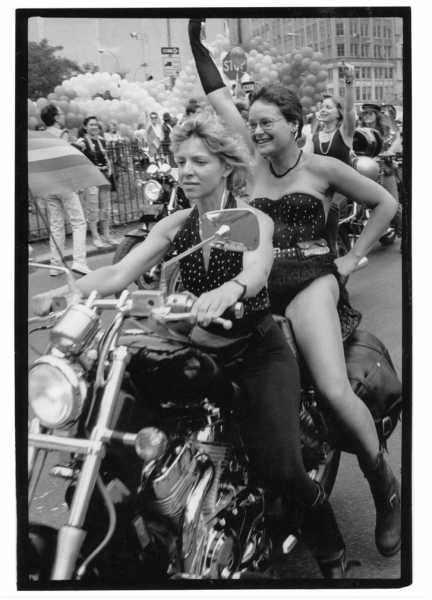 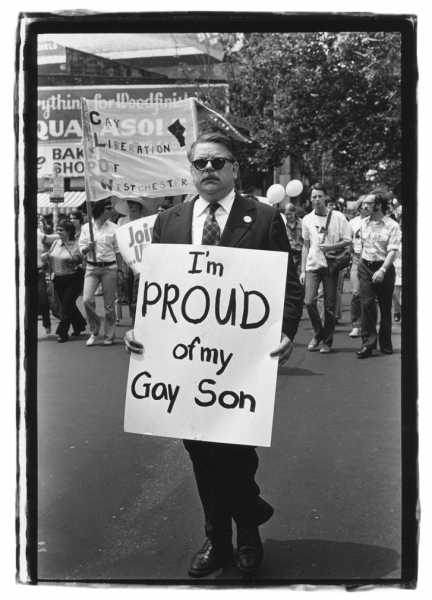 Dick Ashworth, a founding member of PFLAG (Parents and Friends of Lesbians and Gays), marching on June 3, 1974. His sons, Tucker and Eric, both later died of AIDS. 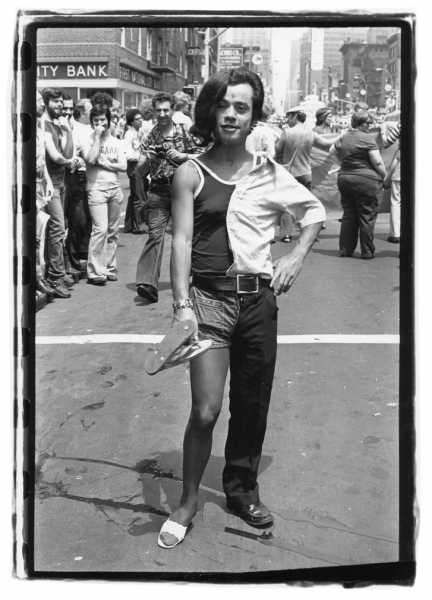 Part of Fred’s drive—isn’t it everyone’s?—was to provide for his children; work meant family and safety. Another thing that I found interesting in many of Fred’s pictures, before and after he started a family with his wife, Gloria, is how interested he was in New York’s improvised families, how we Manhattanites take up with one another and forge living and uncomfortable bonds that last for a night or forever. I think those alliances are at the heart of Fred’s pictures of gay life in the city’s pre- and post-Stonewall days, when things were on the verge of change. And they did change, and of course Fred was there, at the very start of a movement that became a movement when queer people were pushed to the wall that historic night on Christopher Street. Fred saw it all and recorded it all: the young queer people who were tired of being told that their way of being was obscene, that the families they’d made were twisted, all those folks who had been told year after year all their lives that they were wrong. 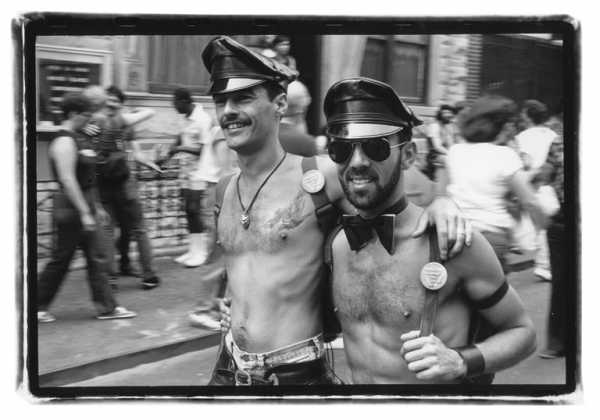 Walking on Christoper Street during the Gay Pride march, June 27, 1982. 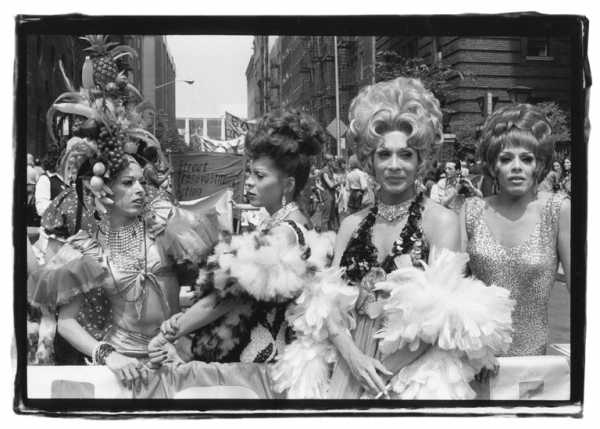 The Stonewall—the safety of a gay bar—was a small thing to ask, having come up with no safety at all, and I wonder if Fred—because of his upbringing—understood that. He must have, because he was always drawn to people who didn’t have a lot but made a lot with what they had. His portrait of Candy Darling, the trans performer, is one of the greatest comments we have not only on transformation but on stillness—a moment of reflection during an era when change, not stillness, was the point. I think I first saw Fred’s pictures of Manhattan’s gay denizens—the protesters fighting for change, fighting to be themselves—at the Oscar Wilde Bookshop, on Christopher Street. That store is gone now, but it stood for so much during its time: another place of safety, filled with information about who we were, and who we would be. 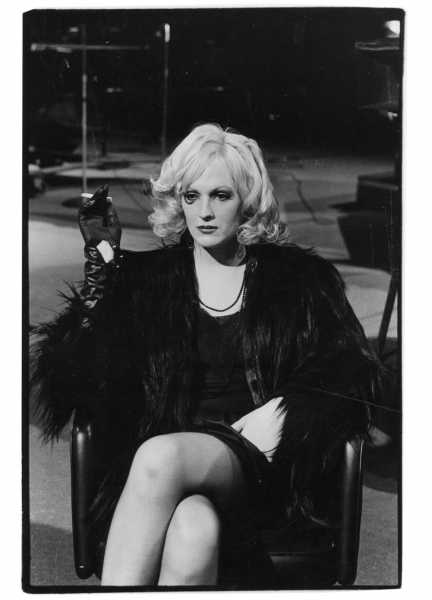 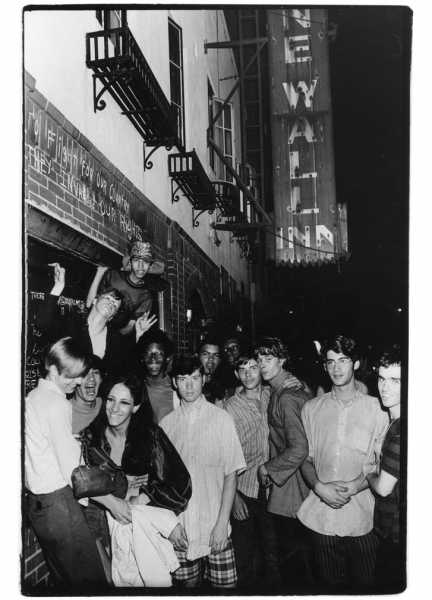 Young people celebrate outside the boarded-up Stonewall Inn after riots over the weekend of June 27, 1969.

As inclusive as New York can be, it is also a segregated city, but I never felt like a divided self at the Oscar Wilde; I felt lucky to enter its doors and see the latest Tennessee Williams, or books by writers like Allen Ginsberg, writers who trafficked in memory and the present. (Fred had photographed both of them, of course.) This would have been in the early nineteen-eighties, when I was barely a self but anxious to join all of those bodies, glitter, voices, and agents of change that Fred, an agent of change himself, recorded with nothing less than love and respect, the same love and respect that many of us had for Fred—who, lifting his camera, saw the person before he saw anything else.

This piece was drawn from the introduction to “Pride: Photographs After Stonewall,” by Fred W. McDarrah, published by OR Books. 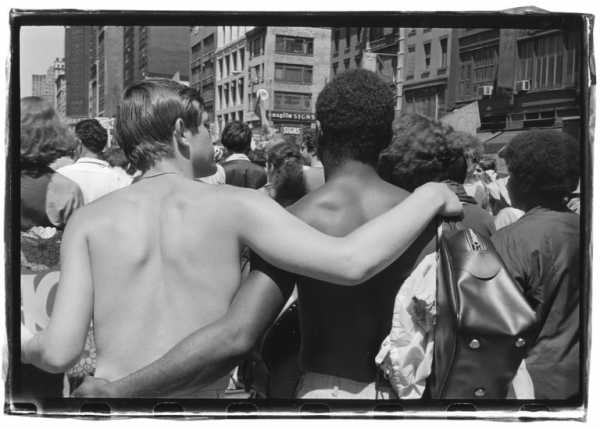 Don’t Get Cold Feet: What’s Best Thing You Can Do to...

The Alien Minimalism of Air Plants |