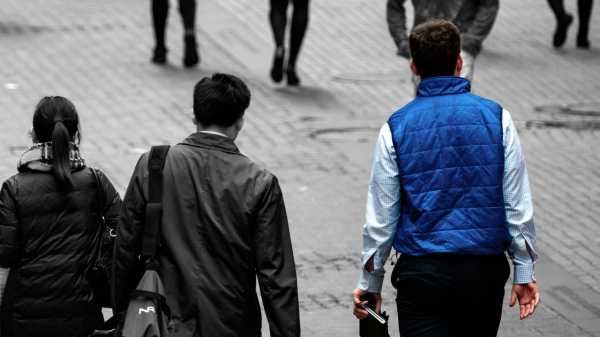 The other day, on the subway, I observed an American male in contemporary business-casual costume. The color of his trousers was richly nondescript. He wore the clean good sneakers of a cautious wonk working on the weekend. His wire-rimmed Ray-Bans, neither glaringly retro nor conspicuously modish, cut a young-executive profile. A corporate logo on the breast of his synthetic-wool fleece vest suggested that he worked for the limited-liability company developing One Vanderbilt Place, a super-tall skyscraper going up on East Forty-second Street, where it will tower over the row of Madison Avenue men’s stores that are the enduring old corridor of establishment style. This was late-modern capitalist menswear settling into Spring/Summer 2019. The fleece was the right weight to meet the cultural weather.

When considering this fleece, we are not considering fashion as expressed in runway looks and streetwear fits, or as worn by trend-piece teens in Hypebeast tie-dye and workwear dads in creative-class chore coats, their pockets rustling with Pepperidge Farm Goldfish. We are considering the uniform of male corporate power, as practiced by aspirants to its élite levels.

This tradition—whose foundation is the business suit—is one that changes at a geological pace, and at the moment its magma is hissing. “The U.S. men’s suit market has shrunk 8% to $1.98 billion since 2015,” the Wall Street Journal reported, in March, in a piece that quoted an investment-bank analyst who matches his blazer to his Lululemon stretch pants. Later that month, the top three guys on the management committee of the Goldman Sachs Group devoted their absurdly valuable time to approving a five-sentence e-mail with the subject line “Firmwide Dress Code”; the message alluded to “the changing nature of workplaces generally in favor of a more casual environment” and urged employees to “dress in a manner that is consistent with your clients’ expectations.” In April, Patagonia announced that its corporate-sales program would no longer pursue new business in making co-branded fleece tops for big, scary B2B entities like financial firms, say, or super-tall-tower developers. Instead, Patagonia would develop accounts with companies whose environmental and social values reflect its own.

The importance of the Patagonia vest is that it is both an evolution of the business-casual costume and a reversion to the waistcoat of the ancient three-piece suit. The fleece vest harmonizes with values that have been invested in the suit since its emergence, in the second half of the seventeenth century. Anne Hollander’s essential book “Sex and Suits: The Evolution of Modern Dress” describes the most desirable outfit of the era: an early form of “the coat-waistcoat-and-pants-with-shirt-and-tie scheme,” suggestive “of a changed military ideal and of the enduring conception that men’ s clothes are honest, comfortable and utilitarian, whereas women’ s are difficult, deceptive and foolish.” The fleece—plush but not pretentious, elegant on the molecular level—fits this lineage.

On and Off the Avenue 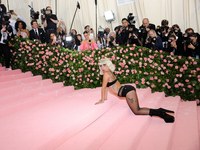 The Met Gala 2019: It May Not Have Been Camp, But It Was Fashion 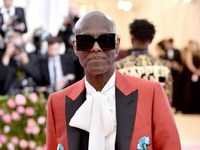 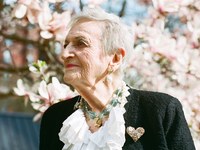 A Grande Dame of the Perfume Industry Turns Ninety-Five 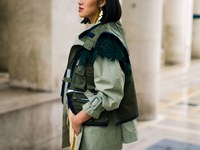 From Grunt Style to “Warcore,” Civilians Are Embracing Military Fashion 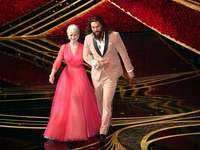 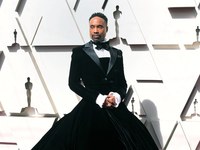 Billy Porter Won the Oscars Red Carpet Before It Even Began

In the twentieth century, when money men wore suits all the time, styling matters were much more straightforward. You would simply start your job at Goldman Sachs, and, very soon, a boss would not only tell you to get your hair cut but send you to a particular place to ask for “the Goldman Sachs,” according to the July, 1990, issue of Spy, which retailed “true-life button-down tales of the corporate fashion police state.” The magazine quotes a former Goldman employee: “And at that point, within a week, my identity had been so stripped down by the corporate mentality that I said okay and just went there immediately.” On the surface, Goldman has loosened up since then—it first adopted a business-casual code during the first dot-com boom, in the late nineteen-nineties, when finance bros learned that some tech-sector hot shots would sneer at them for wearing something so “corporate” as a necktie to a meeting. 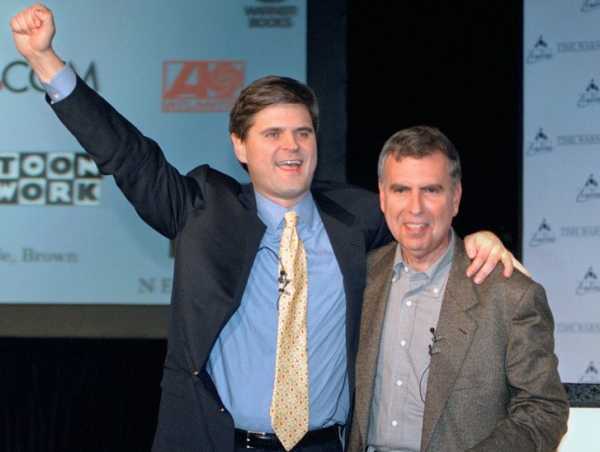 In order to dress in a manner consistent with clients’ expectations, finance bros invented—collectively, like a folk ballad—variants of their tribal garb that met the admiration of tech dudes. Suit jackets were relegated to the back of the Aeron. In 2000, during an interview, I chanced getting the journalist Tom Wolfe to crack himself up about confused status-symbolism at a press event celebrating the merger of Time Warner and AOL. Riffing, Wolfe cackled at the awkwardness of the former AOL C.E.O. Steve Case (who looked like a frat pledge wearing his big brother’s navy suit to a nice dinner) and the former Time Warner C.E.O. Gerald Levin (whose tielessness and chinos struck Wolfe as reflecting a mistaken notion of what to wear to breakfast at Il Fornaio Palo Alto). These days, establishment guys pay better attention—money men wear Allbirds, for example, in obeisance to the tastes of tech guys.

The amazing thing about the recent Goldman Sachs memo is that it decrees a standard without stating its terms. In its metaphysical proclamation that “all of us know what is and is not appropriate for the workplace,” the memo bespeaks a Babylonian code of unspoken rules. It says that professional conduct is identical to ruling-class savoir-faire, and its manners are too circumspect to say much else. “This memo should be taught in business schools,” Matt Levine, a former Goldman employee, wrote, in a Bloomberg opinion column. “Goldman’s dress code is that you should dress the way you’re supposed to dress at Goldman. If you have to ask, etc. The difference between a middling banker and a great one is this sort of tacit knowledge.” This is the essence of Manhattan business-casual, less a style of dress than an enigmatic language of power. It’s not necessarily exclusive in terms of price, but it’s exclusionary in terms of intent. I suspect that its sensibility trickles down from the acknowledged masters of big-money business-casual clothing: Connecticut hedge-fund guys. They are boastful of their rank. Some years ago, they were early to the trend of double-monk-strap shoes, and they later teased their Manhattan counterparts for continuing to be thus shod after they, the Connecticutters, deemed the double-monk passé. 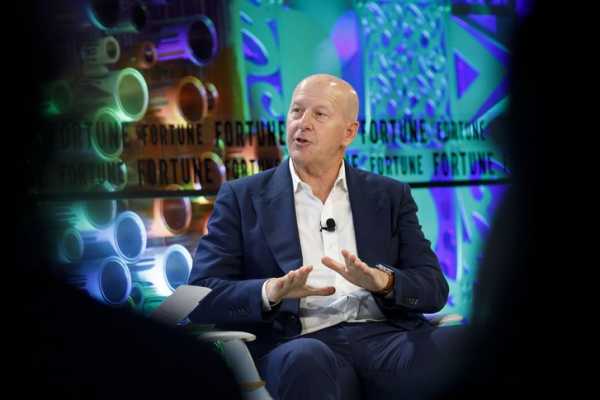 David Solomon, the chief executive officer of Goldman Sachs, at a conference in Dana Point, California, in October.

The untrained eye will catch the system’s drift. Any Goldman Sachs intern will notice that the company’s chairman and C.E.O., David Solomon, is tieless in a portrait on the firm’s Web site, and wearing a shirt of lustrous French blue. The intern will recognize the shirt’s reflection in the many excellent azures adorning the torsos of men entering Goldman’s headquarters this spring. During a sixty-degree springtime lunch hour, you may see these men running out for a fast, casual bite, defenseless, in their shirt sleeves. At Citigroup, on Greenwich Street, the sharp, safe choice for a cool breeze in Q2 is a quilted jacket or vest in aristocratic navy. At any bank, on unfussy fiftysomethings, you see trim black puffers—faded, speaking at once of thrift and expensive ski lifts. The panorama of the scene is a tribute to Ralph Lauren’s prophetic vision: sportswear that’s attached to the traditional garb of monied masculinity by means of it all being stitched together with an invented crest.

Everywhere there are a lot of vests, and why not? In the preppy tradition, they layer well; in the macho one, they highlight virtuous delts. The vests worn by bosses, as sumptuous as a sober manner will allow, are sometimes so lustrous that they seem carved from mahogany, sometimes so buttery that they seem made from the hides of newborn calves. And they are versatile: on a day off, while walking the dog with your boo in her yoga pants, you can wear a gray Patagonia fleece vest over a blue crewneck sweatshirt, artfully exposing the sweatshirt’s central message, which is that you went to Wharton. The other day, at happy hour at Connolly’s Pub & Restaurant, in midtown, I spotted a navy-blue Vineyard Vines fleece vest over a navy gingham shirt, a navy Nautica fleece vest over a navy gingham shirt, and an anonymous mouse-gray fleece vest over a checked flannel shirt. There was also a dude in a shining Moncler ski vest, as if this were winter in Gstaad, or something, and not sixty-one degrees on Forty-seventh Street. Accidents of costume are essential to the systemic farce. 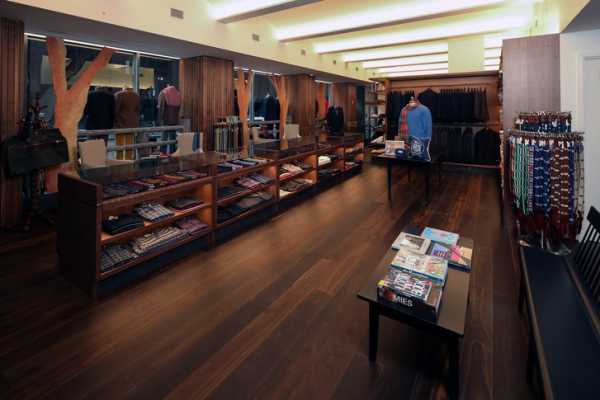 The interior of J. Press, which the New York Times described as “a default outfitter of the northeastern elite,” in midtown.

Last week, I warily approached J. Press. I had been a bit embarrassed by a response this shop—“a default outfitter of the northeastern elite”—had to the Goldman memo. (“J. Press remains hip to the new order,” a promotional newsletter read. “Our millennials often head over to SoHo House, a three-minute walk from the High Line, where suit and tie is no-no.”) But a visit encouraged a sense of perspective. The shop had just ordered a new print run of “Rebel Without a Suit: The Not-So-Casual Road to Casual Friday,” a brief history of the business-casual tradition, by Richard Press and Joseph Cosgriff. The authors’ account ranges from the pivotal “Aloha Fridays” of nineteen-sixties Hawaii to Dockers’s guileful direct appeals to nineteen-nineties H.R. managers and a sartorial correction that followed the 2000 Nasdaq crash, when more than a few large companies rescinded their casual dress codes, even if only temporarily. “Rebel Without a Suit” warns that “whiffing on Casual Friday gives your company another possible reason to fire you, or at least slow down what you once believed to be your meteoric rise to the top of the corporate ranks.” At first I misread that “meteoric” as “meritocratic.” That ominous note sounds like the ring of opening bell on a rag-trade sales day. There is only one rule of business-casual dressing, and it is the rule of fear.

Wenger: Pochettino needs to show he can give more to Tottenham

Poll: most Americans aren’t noticing a tax cut in their paychecks