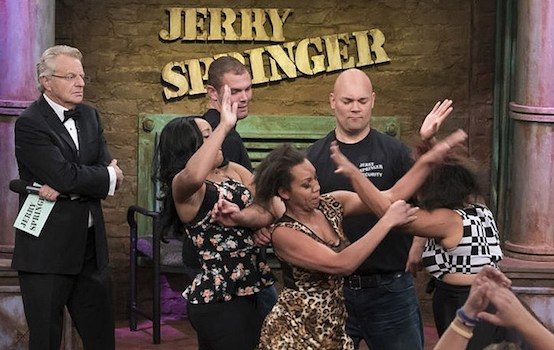 When former Cincinnati mayor Jerry Springer first signed on the air with his signature TV talk show in 1991, there was little reason to suspect that this was the beginning of a cultural juggernaut. As far as anyone was concerned, Springer was treading a road already traveled by Phil Donahue, Oprah Winfrey, and Sally Jessy Raphael, if not the more bombastic Morton Downey Jr.

But after more than a quarter century, Springer has more than proven that his is a show apart. More than anyone, he’s helped sink television to its new low and explode trash programming into the culture war circus that we have today.

It took 27 seasons, but in May, NBC-Universal finally pulled the plug on this bottom-feeding showman, though a “best of Springer”—if you can call it that—rerun package will be offered on the CW Network.

Springer hailed from an era of series daytime talk shows that had replaced the celebrity-driven formats of the 1970s—Dinah Shore and Mike Douglas were retired by their syndicators in 1980, while the mighty Merv Griffin called it quits at age 60 in 1986. Even Johnny Carson was ready to go within less than a year of Springer’s debut. And Dick Cavett, whose consciously cerebral ABC and PBS talk show was recently given a TAC tribute, ceased production at the end of 1981, airing its finale in most PBS markets over the spring and summer of 1982.

It was Phil Donahue who rode to the rescue, tying his top-rated daytime show to white-hot issues that were previously taboo for TV—transgenderism, date rape, molestation, domestic violence, feminists versus fundamentalists, AIDS, institutional racism, and so on. And if Donahue was Adam, then in 1986, Oprah became Eve (along with Sally Jessy), adding her signature empathy and message of empowerment, becoming the first African-American woman to host a truly successful daytime talker. (The great Della Reese tried from 1969 to 1970, but her show never took off.)

As the novelty of Oprah, Sally Jessy, and Donahue’s top-rated offerings wore off, syndicators became ever more intent on turning up the scandal and the sizzle. Geraldo Rivera and Morton Downey Jr. were fresh out of the gate by the late ‘80s, even as shows like Entertainment Tonight and PM Magazine (somewhat unintentionally) gave birth to the hardcore tabloidism of Hard Copy, Inside Edition, and A Current Affair.

But it was in 1993, when former John Waters movie teen queen Ricki Lake launched her talk show—the first to explicitly target Gen. X high school and college-age students—that Springer had his lightbulb-above-the-head moment. Pushing the limits of paternity testing, transgender this-‘n’-that, and sex in general, Ricki ruled the ratings, even as a 40-something former backup singer and showgirl named Jenny Jones was climbing the charts with her newly launched show (we’ll get to her in a minute).

As any religious conservative will tell you, there were plenty of other trends in the ‘80s and ‘90s—the not entirely holy trinity of MTV, Madonna, and Marilyn Manson, plus hardcore gangsta rap, Quentin Tarantino, Beavis, Bart Simpson, and Cartman—that contributed to the coarsened American pop culture that we “enjoy” today. There was one thing, though, that set Springer and his ilk apart.

Like their secular patron saints Lenny Bruce, Richard Pryor, and George Carlin, late 20th-century entertainers used their boundary pushing to “out” and address the hypocrisies, double standards, and self-satisfied smugness of their time. But what “redeeming social value” could one find in The Jerry Springer Show besides the cheapest of cheap laughs at the expense of fellow Americans’ pain, humiliation, and palpable desperation? A show that treated its all-too-human guests like toilet paper? A show proud of its “distinction” as “The Worst Show on Television” from TV Guide? Even Springer’s predecessor as the Ayatollah of Trasherola, game show guru Chuck Barris, rightly recalled that most people had the time of their lives when they were contestants on the Gong Show or Newlywed Game. Not so on Springer: they usually left with black eyes, torn hair, and tear-stained faces.

I can still remember watching in my (relative) youth a few minutes of an all-too-typical episode in 1999 or 2000, when the Springer show was at the summit of its popularity. It was yet another episode promising “Sexy Secrets.” This time, a Latino male prostitute was readying to drop a truth bomb on his conservative sister. “I’m a street-walking ‘ho, Jerry!” He sashayed when Jerry called him out, and the crowd cheered Beatles-style. “You want it, you want it!” he cajoled, working the audience. Jerry brought out the sister and said (in his most obsequious and respectful tone) that her brother had something to tell her. Of course, Sis crumpled into tears, weeping and wailing, as the hooting and hollering audience laugh-laughed and ooh-oohed.

Five years or so earlier in early 1995, Jerry’s closest runner-up for trashiest TV talk show, The Jenny Jones Show, ran an even worse Sexy Secrets special. This time, another femme gay man detailed his hottest fantasies about his straight neighbor, who was then brought out for the Big Reveal. The neighbor thought he was about to be reunited with his old girlfriend, and the producers just let him go right on thinking that. The straight young man had struggled with mental illness and had already attempted suicide once—something that the producers on Jenny Jones either didn’t bother to find out, or, much more chillingly, deliberately chose to ignore.

After Jenny gay-baited the squirmingly uncomfortable “couple” in the ugliest ways (including asking her audience like a teenage Valley Girl if a male-to-male kiss was really an “errrrooooootttic” kiss or not), she then sent her two guests home summarily with no apparent follow-up, nothing. The humiliated and panicked guest of honor with the history of mental illness blew the gay man’s brains out practically as soon as they both got back to their hometown. Two lives were destroyed, but “the show must go on”—all the way until 2003 in Jenny’s case, eight years after her most famous guest had his funeral.

Ironically, the heyday of The Jerry Springer Show also corresponded to what many critics call TV’s Second (or Third) Golden Age: The Sopranos, The West Wing, ER, The X-Files, Seinfeld, Sex and the City, Desperate Housewives, to name a few. Then again, there were also the early-evening garbage shows (EXTRA, Access Hollywood, and Inside Edition), and as we all know, “reality TV” began to sow its cloying seeds, from the tiniest cable boutiques to Big Four network primetime.

Most tellingly of all, cable news has completely adopted the Springer aesthetic. They may not feature live paternity test results and “baby mamas” scratching and kicking their rivals on air, but no doubt there is a little Jerry in every one of those bemused but puckish anchors refereeing the ugly catfights between political pundits on CNN and MSNBC today. Over Jerry’s long run, TV made its final transition from being a mass-market medium to a demographically targeted microcosm of 300 channels producing “content” from low to high—with the broad American middle (if such a thing even exists anymore) ever increasingly squeezed out of the wide-screen picture.

From A-list celebs going out of their way to trigger Trump voters at awards ceremonies to Trump’s own Twitter tantrums and locker-room braggadocio, we as a society have had way too many Springer show moments lately. Perhaps we shouldn’t be surprised that our own president once staged his own “smackdowns” on WWF—he seemed to know instinctively what a certain (broad?) spectrum of voters wanted.

Springer was ultimately a symptom, not the disease. Still, it’s hard to shed any tears for one less cyst on pop culture’s behind, especially with the way everything else has been going lately. And to use the unctuous catchphrase of Jerry’s simpering little “homilies” and insincere “life lessons” at the end of his shows…

That, my dear friends, is my “Final Thought” on the life and death of The Jerry Springer Show. And hopefully, he WON’T be back after the next commercial message.

Telly Davidson is the author of a new book, Culture War: How the 90’s Made Us Who We Are Today (Like it Or Not). He has written on culture for ATTN, FrumForum, All About Jazz, FilmStew, and Guitar Player, and worked on the Emmy-nominated PBS series “Pioneers of Television.”

Notre Dame Cathedral One Year On After Devastating Fire

Scientists Find Way to Save $3 Billion a Year Worth of...

The Mexican ambassador to the US explains Trump’s claim of a...