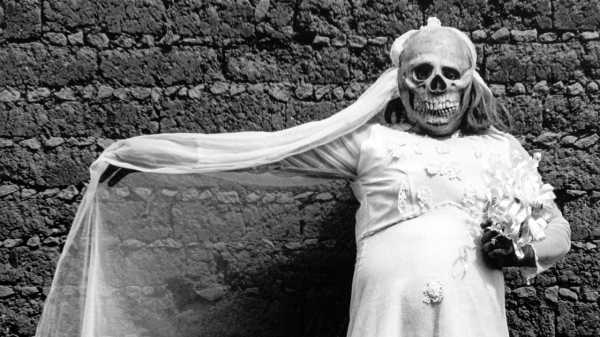 Four years ago, at the age of seventy-three, the Mexican photographer Graciela Iturbide travelled across her country with the United Nations High Commissioner for Refugees. Their journey began in the southern state of Tabasco, near the border with Guatemala, where migrants make their way north atop a notorious freight train known as La Bestia. In the town of Tenosique, Iturbide stopped by La 72, a shelter built in memory of seventy-two migrants who were slain by a drug cartel, their bodies found, blindfolded and bound, in a derelict farm across the border from Brownsville. The backdrop for many of her photographs were shelters run by friars and nuns, where she captured migrants in rare moments of respite. We see a pair of lovers, who had met on the road, locked in an embrace, and a mother unwinding with her infant son, their forms casting a shadow on a hand-painted mural of Mexico dotted with safety and danger zones. On the last stop of her trip, at a shelter in Oaxaca, Iturbide met a Salvadoran teen-ager who was fleeing MS-13 because he had refused to kill. She found the boy in front of a desktop computer, listening to MS-13 raps and composing his own verses. “Even if he didn’t want to belong anymore, he still did,” Iturbide told me recently by phone, from her studio, in Mexico City. 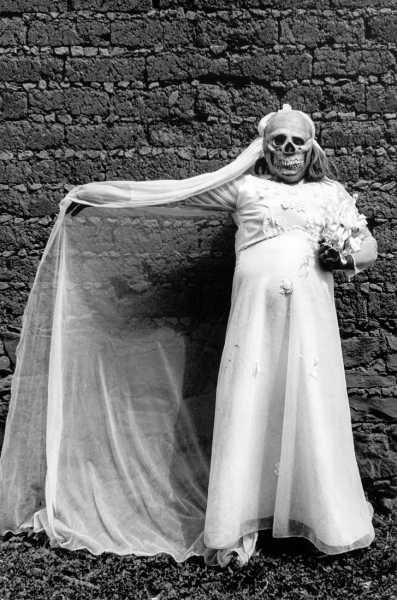 In the course of her half-century-long career, Iturbide has made a case for seeing oneself in the other. (Her work was the subject of a recent retrospective and a corresponding book from the Museum of Fine Arts, Boston.) Born into a Roman Catholic family in 1942, she was the oldest of thirteen children. Her father, an amateur photographer, often used his children as subjects, and his hobby became a source of admiration for Iturbide. She hoped to study the humanities, but her parents opposed the idea, expecting their daughter to devote herself to a domestic life. She married and had three children by the age of twenty-three, then enrolled in film school. While there, she divorced her husband and studied under Manuel Álvarez Bravo, whom André Breton once described as a photographer who “put all of poetic Mexico within our reach.” Don Manuel, as he was known, became Iturbide’s trusted mentor and a guide as she made her first journeys across the country. In his studio, he kept a piece of paper inscribed with the words “Hay Tiempo”—“There is Time.” 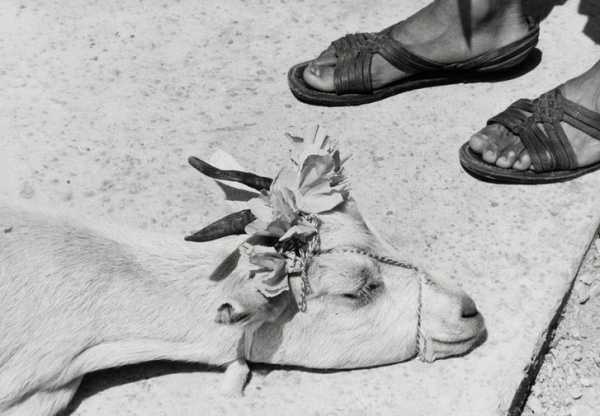 From the beginning, Iturbide used monochrome film and relied exclusively on natural light—a technique that lent a mesmerizing rawness to her scenes. “What I see in black and white is more truthful to me,” she said. And, from early on, she dedicated herself to documenting the daily lives, the mores, and the remarkable diversity of Mexican people, always with an eye for the dignity of her subjects. In the late seventies, she collaborated with the National Indigenous Institute and spent months living among the Seri, a nomadic tribe of hunter-gatherers and fishers. In Juchitán, a city southeast of Oaxaca, she immersed herself in a Zapotec community where women have long had a commanding role. In the course of six years, Iturbide captured intimate scenes of their everyday lives—at church getting married, at home taking a bath, and out on the streets holding parties that stretched until twilight. On one occasion, while strolling through a market, she met a woman named Sobeida Díaz, who had eight iguanas perched on top of her hair. Captivated, Iturbide asked for permission to take her portrait. Diaz accepted, and, with a coy smile, she adjusted Díaz’s pose and that of her live merchandise. 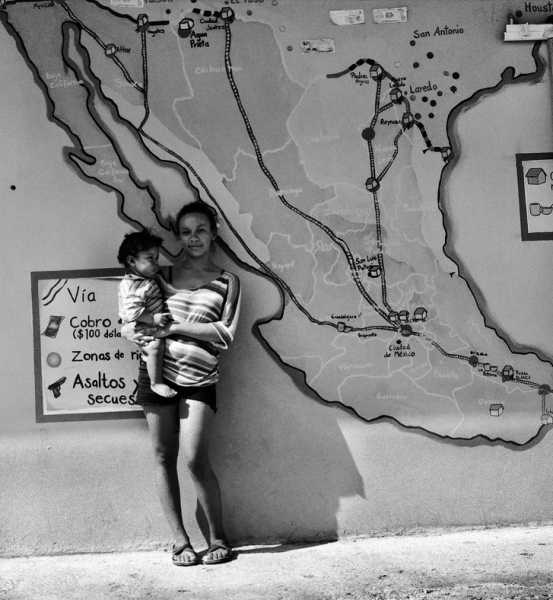 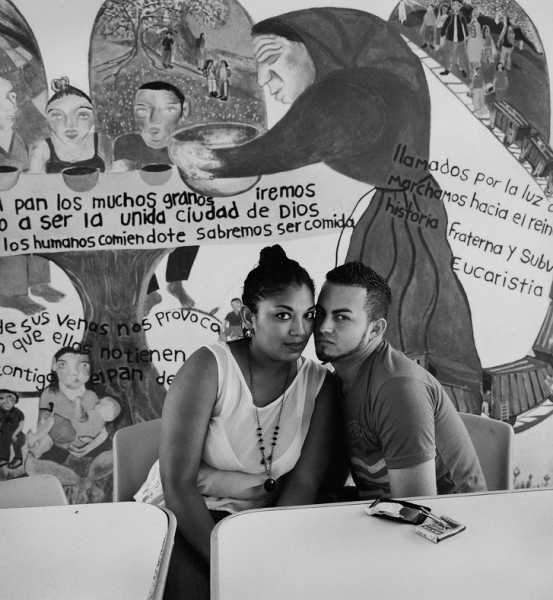 When the resulting portrait, titled “Our Lady of the Iguanas,” was exhibited, in 1979, Díaz became an icon, her image reproduced in sculptures, posters, and road signs across Juchitán. “Someone even told me that a quinceañera had celebrated her birthday wearing a crown of iguanas,” Iturbide recalled with amusement. Over the years, it proved harder for Iturbide to keep up with the daily festivities and hard-drinking habits of Juchitán’s residents, but she kept in close touch with the women she had met there. When Díaz died, in 2015, Iturbide made a promise to Diaz’s daughter: she would return to Juchitán once more to build her mother’s tomb. 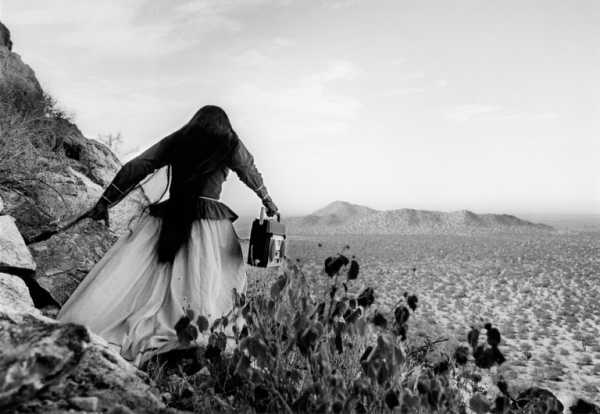 Death—as ritual and destiny—is a recurrent theme of Iturbide’s work. In 1970, she suffered the loss of her daughter, Claudia, who was six years old at the time. Afterward, she told me, examining the rituals surrounding death in Mexico became a form of therapy. She searched out pre-Hispanic and Catholic mythologies, documenting the wealth of icons and symbols relating to death in Mexico, and telling the story of a country in which death transcends the realm of tragedy. Between 1969 and 1976, she made a series on angelitos, or little angels—children who have died and whose spirits, according to Mexican folklore, will soar into the sky. One day, in the city of Dolores Hidalgo, Iturbide came across an indigenous family carrying an angelito in a casket, and she followed their procession toward the Dolores Hidalgo cemetery. She photographed the baby’s body—adorned with paper lilies, hand-cut stars, and a pearled crown. As they walked, the child’s father drew Iturbide’s attention to a man’s corpse lying on the pavement, still partly dressed, his flesh gnawed away by birds. After the burial, led by curiosity, she walked back toward the dead man and found herself alone, struggling to photograph him. She recalled the moment as a type of closure. “It was as if death had told me, ‘Enough, Graciela!’ ” she said. 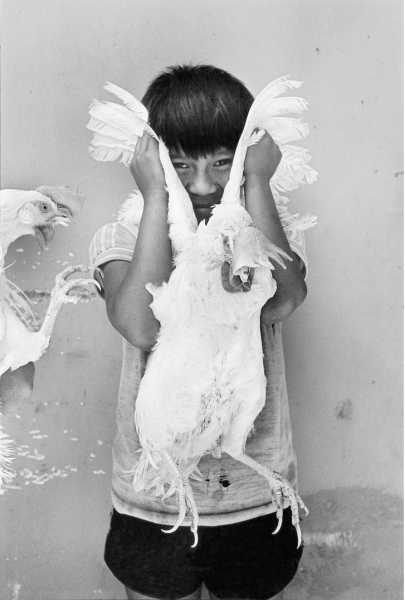 From that point on, Iturbide shifted her attention to a project on birds, which she has continued working on to this day, in Mexico and on her travels abroad. Like many of her other subjects, birds—large and small, in a flock, alone, flying or motionless—have allowed Iturbide to look inward. In her self-portrait “Eyes to Fly With?,” from 1991, Iturbide covers her eyes with two winged creatures, one dead and the other alive. The picture makes literal the double vision that has defined much of Iturbide’s prodigious work: an eye for what has passed and for what lives on. 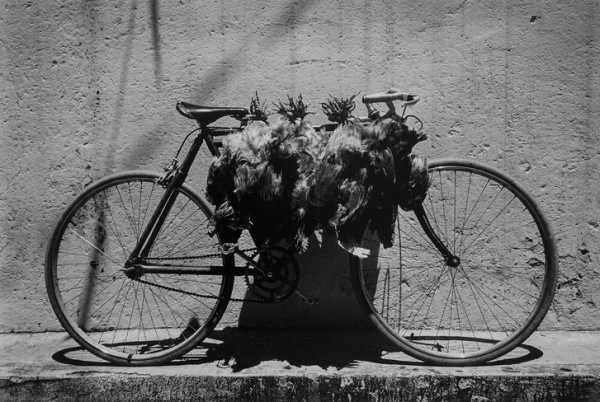 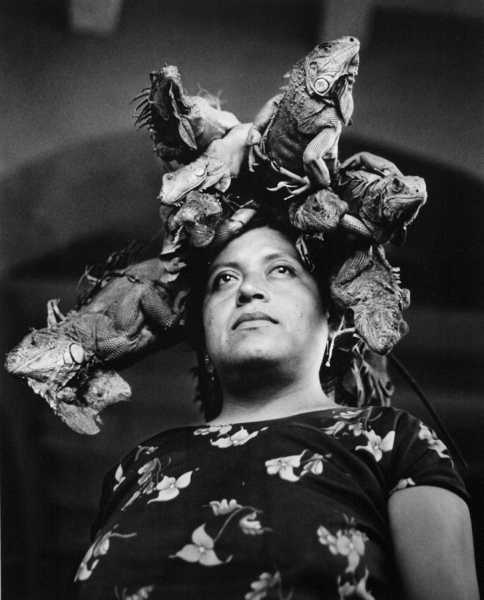 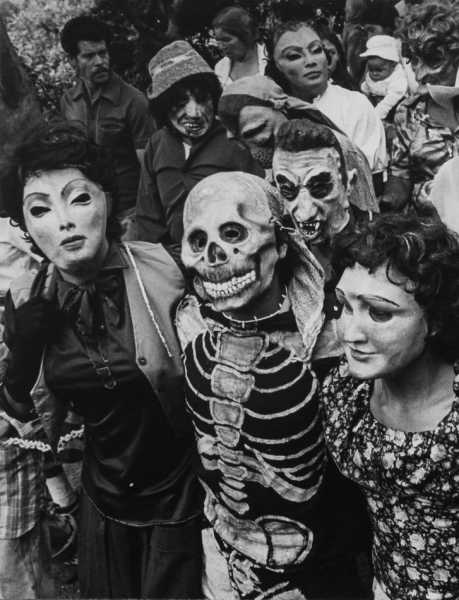 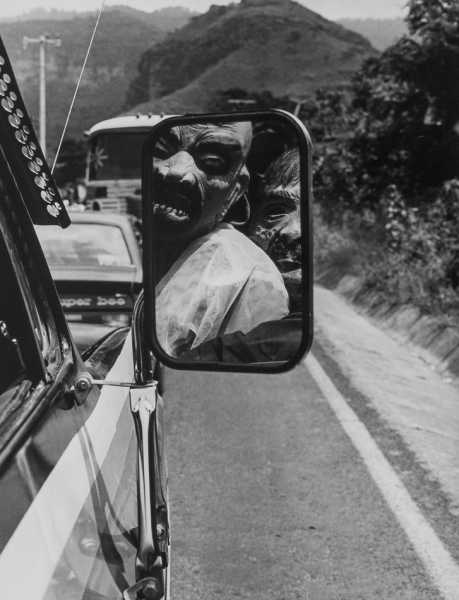 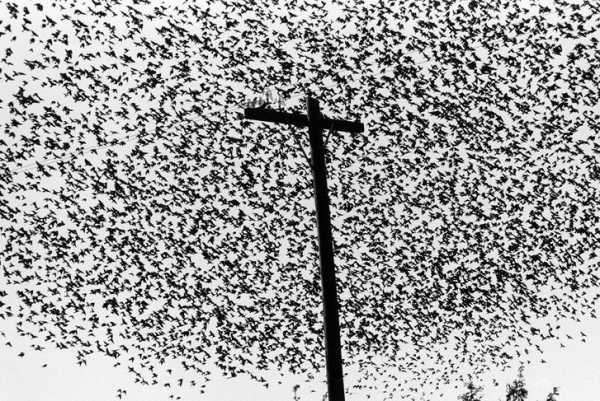