Home Culture Halloween TV in a Time of Frightful Crisis | 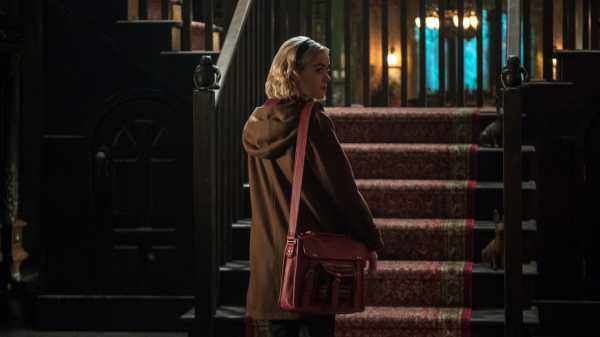 This Halloween season, there has been no awaking from the nightmare of history. We were jumpy all October. Our screens glowed like radioactive jack-o’-lanterns. This is a period of frightful crisis, and it is rife with fright shows that disguise the spirit of the times in classic costumes.

The conspicuous common theme of the season’s hits and interesting misses has been the throwback. At the movies, “Halloween,” an update of John Carpenter’s slasher franchise, returned Jamie Lee Curtis to the role of Laurie Strode, to popular excitement—her triumph as an A.A.R.P.-eligible box-office queen was a story in itself, a victory over bias. Network TV saw the resurrection of Aaron Spelling’s “Charmed,” on the CW, with its trio of action witches meeting again, this time as a squad whose adventures owe debts both to the themes of J. K. Rowling novels and those of pop feminism. And the fashionable horror series of the season has been Netflix’s “The Haunting of Hill House,” adapted from the Shirley Jackson novella, from 1959, which was also the basis of Robert Wise’s “The Haunting,” from 1963. The showrunner, Mike Flanagan, builds a dreadful atmosphere, which is crucial, because the creeping pace of his ten episodes would be intolerable if not for its ambient suspense. The show may work best as a binge watch, one where you don’t pay steady attention but instead let it haunt your own house. (The musical cues will draw you back in sufficient time to gasp at the jump scares.)

“Hill House” is the rambling tale of five grown siblings whose upbringing was scarred by an occult trauma. The titular edifice is equal parts Romanesque and Edward Hopper, with shades of the psyche-sucking gloom of the novel “House of Leaves,” in which an unspeakable expanse opens up within a family home and festers like an unattended wound. The undead prey upon the genre of the sprawling domestic drama: on this show, death is the family business as much as it was for the Fishers on “Six Feet Under.” Gothic and New Age-y at once, “Hill House” is a psychodrama about the return of the repressed, composed of scenes that worry over common emotional anxieties, with a fractured time line that brings to mind “Sharp Objects” (as the show reckons with formative traumas) or “Westworld” (in its strenuous pads through flashbacks).

“Chilling Adventures of Sabrina” (Netflix), which stars Kiernan Shipka as the endearing teen-age witch, shares the visual murkiness of “Hill House,” but it has a clearer point of view in both its appeal to nostalgia and its critique of it. The show was developed by Roberto Aguirre-Sacasa, who also runs “Riverdale,” on the CW, which likewise adapts an Archie Comics property into a slick, attractively melodramatic romance. “Sabrina” is set in Greendale, U.S.A., in a period dressed with tail fins and varsity jackets, though its demographics and politics position this innocent backdrop as a set for staging contemporary teen drama. Its stylized design heightens the coziness and claustrophobia of a small-town yesteryear—there’s something ominous in the soda-counter scenery, a dollop of David Lynch in the milkshakes.

“Sabrina” is also possessed by the spirit of Kevin Williamson’s script for Wes Craven’s “Scream”: there’s a giddy cleverness in how it shouts out its own tropes and knowing riffs, in the service of minting a Faustian coming-of-age tale in which the retro atmosphere mingles with progressive gender politics. Sabrina is edging toward an October 31st on which she will celebrate a “Sweet 16 Dark Baptism.” It dawns on her that coming into her age of self-determination entails her bodily subjugation to Satan, and all the heavy consequences thereof. The show embodies the sensibility of this uncertain season. It acknowledges the darkness of reality while providing an escape into a security blanket—we are curled up beneath it on the couch, shivering.

The Trump administration will start sending migrants back to Guatemala under...

Mesut Ozil expects to remain with Arsenal next season