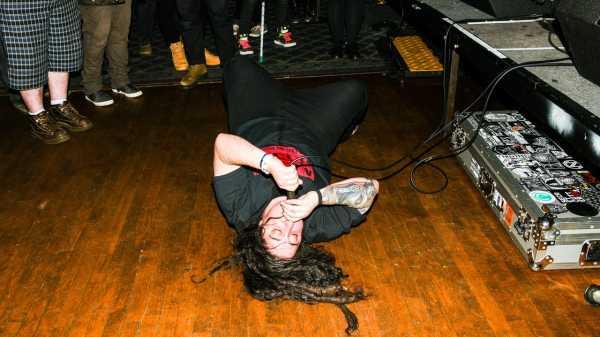 “The world is on fire,” Ben Hutcherson told an audience in Brooklyn, last month, before a set by his band, Glacial Tomb. He added, “At least we can all burn together.” Over the next thirty minutes, the band, which Hutcherson describes as playing “blackened, sludgy death metal,” roared through a half-dozen songs, replete with thundering drums and growled vocals. The set ended with a broadside of defiance, in the form of a cover of the punk band Aus-Rotten’s “Fuck Nazi Sympathy.” As Glacial Tomb sped through the song—which includes the lines “Don’t respect something that has no respect” and “Don’t give them their freedom, because they’re not going to give you yours”—audience members shouted the lyrics, churned in a mosh pit, and dove from the stage.

The set was part of a fifteen-band weekend festival at Brooklyn Bazaar, in Greenpoint, called Black Flags Over Brooklyn, which was organized as probably New York City’s first anti-Fascist extreme-metal show. It was planned partly as a celebration of an underground form of music that has traditionally thrived on images of drama and danger, and partly as a response to a subgenre known as National Socialist black metal, which espouses neo-Nazi views and has been described by the Southern Poverty Law Center as aiming to recruit youth to white-supremacist causes. The organizer of the Black Flags show, Kim Kelly, who, until recently, was a metal editor for Noisey and has written for Pitchfork, Spin, and Rolling Stone, said that, although National Socialist black-metal bands comprise only a small percentage of metal music, they have recently had outsized visibility. And, as far-right movements have grown in the United States and Europe, she said, some metal fans have begun having discussions about politics and expression that mirror those taking place in the broader culture. 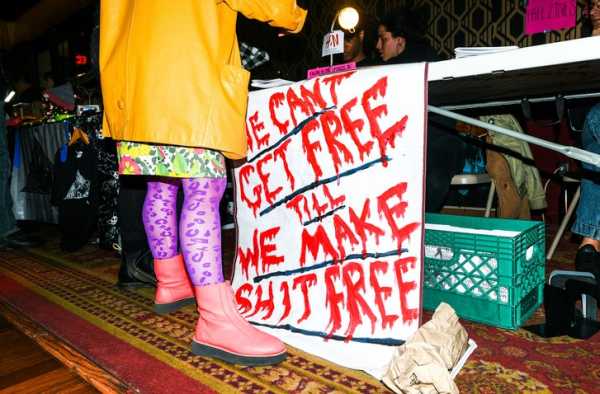 The Here & Now table, which passed out copies of free zines, in the ground-room floor at Brooklyn Bazaar. 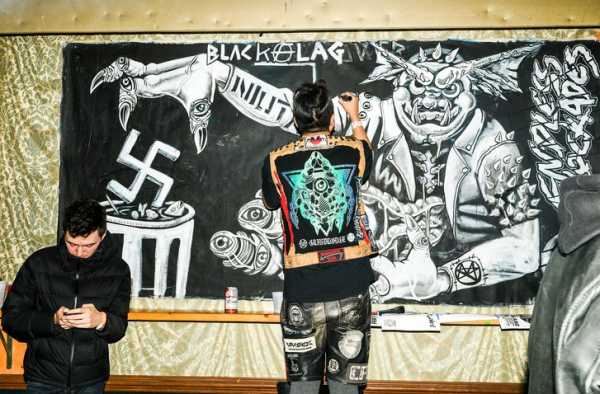 The artist Masato Okano, who said that he creates flyer artwork for metal bands, painted a mural in the performance space.

“Should metal stay dangerous and controversial and offensive?” Kelly said. “Is it censorship to deny bands a platform for their genocidal views? Is it curtailing their free speech to make it harder for a band to get booked or get signed versus at what point does it become critical to keep these dangerous Fascist elements out of our scene? At what point is that record worth so much to you that you would buy it knowing that you were actively contributing to something that is harming other people?”

The beginning of black metal—self-consciously bleak and featuring howled lyrics, crashing chords, and an often apocalyptic, misanthropic aesthetic—is usually traced to the English band Venom, which used the term as the title of its second album, in 1982. National Socialist black metal emerged from a darker environment, in the nineteen-nineties, that featured figures like Varg Vikernes, of the one-man band Burzum. Vikernes, who was part of a Norwegian black-metal scene whose practitioners often wore ghoulish black-and-white “corpse paint” and upside-down crucifixes, was known for burning churches. In 1993, while playing bass in the band Mayhem, he murdered the guitarist, a man known as Euronymous. That same year, Hendrik Möbus, of the German band Absurd—whose album “Asgardsrei,” from 1999, is seen as influential in the world of National Socialist black metal—took part, with two accomplices, in the murder of a high-school classmate. After violating the terms of his release from juvenile detention, Möbus fled to the United States. Before being arrested and returned to Germany to face charges, he lived for a time in a West Virginia compound belonging to the neo-Nazi leader William Pierce. 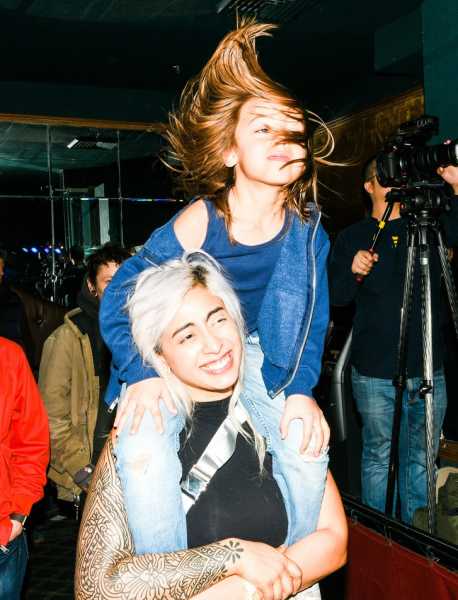 Rupa Bhattacharya and (on her shoulders) Sai Gatrall watch Glacial Tomb perform, from the back of the room.

Among bands that are said today to fall into the category of N.S.B.M., as it is often called, are М8Л8ТХ, from Russia, whose fans have given Nazi salutes during performances; a Finnish band, Goatmoon, which has performed in front of a backdrop resembling a Nazi flag; and Der Stürmer, from Greece, which shares a name with an anti-Semitic German newspaper whose editor, Julius Streicher, was convicted during the Nuremberg trials and then executed. Those bands and others, including Stahlfront, Sunwheel, Absurd, and Dark Fury, performed in December at the Asgardsrei festival, in Kiev, where Nazi-style displays abounded.

Because N.S.B.M. is a label that few bands are eager to embrace, deciding who ought to be categorized that way has often been a matter of debate. In the past few years, leftists have attempted to halt shows by metal bands whom they accuse of promoting Fascism or racism. In many cases, bands have countered that they have been mischaracterized, or that accusations are based upon past associations that have since been abandoned. In 2016, organizers of the Messe des Morts festival, in Montreal, cancelled an appearance by the Polish band Graveland after an Antifa group announced plans for a confrontational protest. The band responded on its Web site by writing, “Graveland is not NSBM!” Last year, the Norwegian band Taake cancelled its American tour dates after anti-Fascists posted photographs on social media of the band’s leader with a swastika image on his chest, along with the phone numbers of the venues where the band was to play. Taake denied that it had anything to do with Nazism, and accused its critics, including the rapper Talib Kweli, who cancelled a show at a club in Kansas City that had booked the band, of taking part in a witch hunt.

The announcements for the Black Flags shows, which also included performances by Racetraitor, Cloud Rat, Dawn Ray’d, and others, portrayed the rejection of far-right metal as an urgent issue, saying, in part, “The worldwide rise of violent white supremacy and fascism has put every one of us—but especially those in marginalized communities—at risk, and metal should not be allowed to become a breeding ground for right-wing extremism. . . . This festival is for those of us who reject and push back against that poison—who adhere to the mantra that ‘Metal is for everyone (except Nazis),’ and who are committed to cleaning up our own backyard.”

Kelly said that, because metal fans are part of a close-knit community, some may see criticism as an effort by outside forces to sanitize or change what they hold dear. One reason to organize the festival, she said, was to give metal fans and anti-Fascists a chance to see that there were areas where they could overlap. “I just wanted to show people that you can have militant politics and you can be a metalhead, and those things don’t have to be mutually exclusive at all,” she said. “I don’t understand how you can love something deeply, the way I love heavy metal, and not want it to be the best it can be, and how you would not want to share it with as many people as possible.” 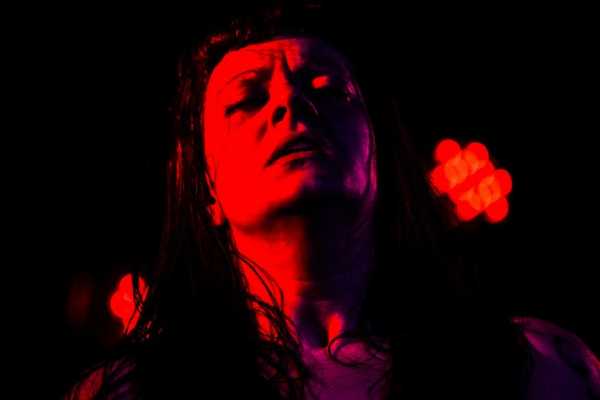 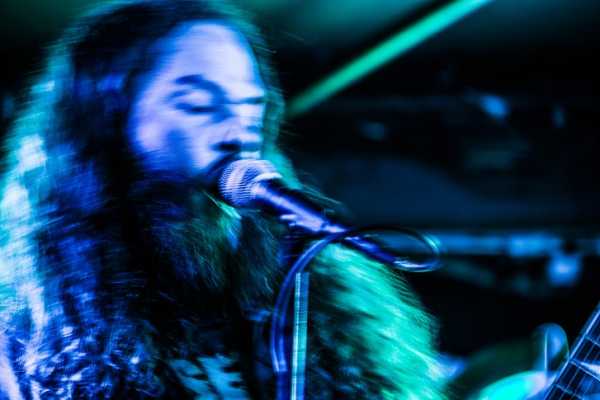 In addition to the musical performances, staged in Brooklyn Bazaar’s second floor, Black Flags also showcased various types of literature, in a ground-floor room. There were zines about how to support a victim of sexual assault or fight back against an attacker. There were pamphlets urging solidarity with Kurds who are threatened by both Turkish forces and ISIS. The publishers Verso Books, Haymarket Books, AK Press, and PM Press sold books connected to political organizing. Suzanne Shaffer, standing behind the AK table—where books on display included “Militant Anti-Fascism: A Hundred Years of Resistance,” “Alerta! Alerta!: Snapshots of Europe’s Anti-Fascist Struggle,” “Fascism Today: What It Is And How To End It,” and “Against the Fascist Creep”—said that she hoped these works would reach a new audience. “It’s really important to come together against Fascism,” she said. “And it’s good to have books be a part of that.”

After Glacial Tomb finished its set, Hutcherson—who is also a member of another band, Khemmis, and is studying the Denver heavy-metal scene while working on a sociology Ph.D. at the University of Colorado, Boulder—walked through Brooklyn Bazaar’s ground floor and stood at the rear of the room, near a table of T-shirts with anti-Fascist slogans. The festival, he said, could be seen as part of an effort to reassert the spirit of metal, which has a history of challenging power and giving people who don’t feel connected to the world around them a place to belong. “The promise of the underground, regardless of the style, whether it’s metal or punk or hardcore or grindcore or whatever, is one of subversion and resistance,” he said. “Danger isn’t about punching down. It’s about punching up.” 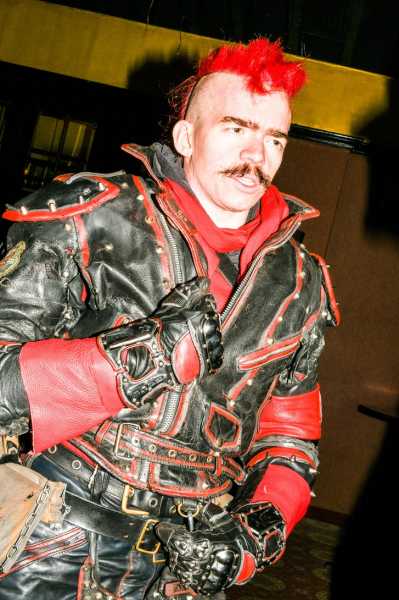 The toy maker Luke Reich, of the band Gowanus Mutant Kommandos, in the ground-floor zine area. 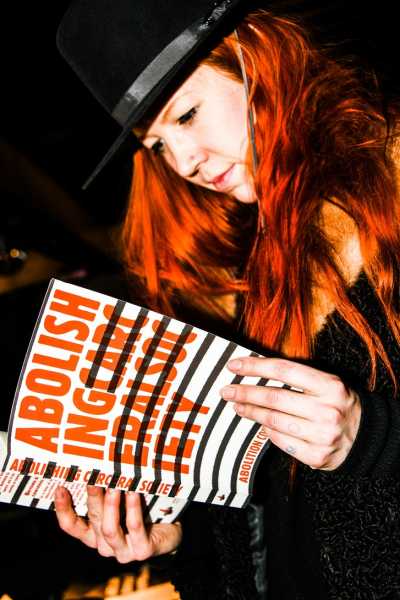 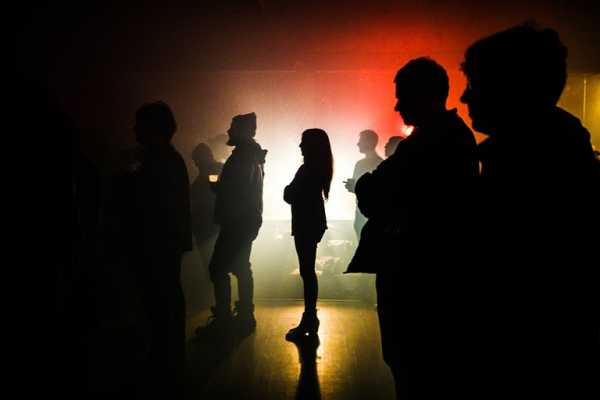 The crowd listens to the band White Phosphorus’s set.

Deal or No Deal, UK Will ‘Restore Economic and Political Independence’...