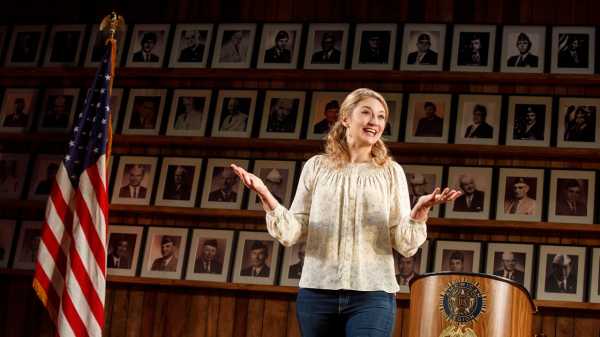 Those looking for a way to soothe the visceral feelings of helplessness, outrage, and demoralized fatigue engendered by current events would do well to pay a visit to the New York Theatre Workshop, in the East Village, where the playwright and performer Heidi Schreck is holding court (sometimes literally) in “What the Constitution Means to Me,” directed by Oliver Butler. Previewing the piece here during a workshop run in 2017, Sarah Larson wrote that it seemed “structured to fend off despair.” I can report that, even now, another year further down the hole of this pitch-black political season, the show still manages to accomplish that miraculous feat.

Part personal history, part civics lesson, “Constitution” serves as an act of public service, a salve for an audience that has had its spirit beaten up. It is a forum for us to think together, rationally, communally, about the United States—its shifting character, its ostensibly noble purpose, its sometimes unfortunate tendencies. Schreck performs most of the piece herself, directly addressing the audience in storytelling mode, presenting herself as a woke American everywoman: engaged, self-aware, open-eyed. If the play’s proceedings are sometimes wonky, they are delightfully so. Schreck informs us that she has been thinking deeply about the United States Constitution ever since, as a teen-ager, she would travel the country giving speeches about it in American Legion contests, squirrelling away prize money to subsidize her college education. Having now endured two years of an Administration that has shown either ignorance of, or disregard for, some of the Constitution’s fundamental tenets, it comes as a great joy to follow Schreck through a nuanced, thoughtful, nonpartisan exploration of same. The experience is not unlike that of wandering into a well-stocked neighborhood bookstore on a rainy Sunday afternoon in autumn, with nowhere else to be.

An essential ingredient of Schreck’s success has something to do with her simple humanity. In addition to being wickedly smart, she is also warm, welcoming, and vulnerable. The topics her piece trucks in and some of the stories she tells can be deadly serious, even horrifying, but the show never descends into grim pathos. Though it examines how the voices of the disenfranchised in this country have been historically and systematically silenced by wealthy white men, Schreck does not seem to have an axe to grind, and she is quick to assure us of this. “I love men!” she exclaims at one point. “I’m the daughter of a father!” Schreck is keenly aware of the various absurdities and indignities that many Americans are asked to tolerate on a daily basis, but she also has the wisdom to know that finger-wagging is never as effective as holding up a mirror.

Much of what is so winning about Schreck’s performance is its guileless anti-theatricality. There is hardly any show-business veneer to the proceedings. Except for those moments when she is obviously reënacting a flashback to her past, Schreck doesn’t seem to be performing at all, but simply acting as facilitator, endeavoring at every turn to speak directly to us—not to a nameless, faceless us, somewhere out there in the darkened middle distance, but to us, the actual people in the actual seats in the actual moment. (Schreck has said in interviews that she has built the freedom to improvise into every performance.) There’s a functional, minimal set, there are functional, minimal lights, there is no amplification. If Schreck seems to vocally strain at times, it only serves to heighten the sense of realness that infuses the whole; we are grateful for it, one less barrier between her and us. Most of the time, it’s easy to forget that we’re in a theatre at all. We could just as easily be in a classroom, or a living room, or a church.

Watching the show, I found myself wondering: Is “What the Constitution Means to Me” a play? Couldn’t it just as easily be a TED talk, or a podcast, or a lecture? Schreck’s narrative is nothing if not absolutely hers, rooted in her particular experience. There is no attempt to obscure the fact that it is she, Heidi Schreck, who is talking to us, telling us her real story (or her autofictional story). Her text could be performed by someone else, but it would suffer for a lack of authenticity. So what makes this a play? Why does it belong in a theatre?

The answer arrives about three-quarters into the show. No spoilers here, except to say that the moment lands an emotional blow—not of the flattening, gut-wallop variety, but of the deus ex machina, spiritually ennobling one, its origins in the provenance of the theatrical form itself. It is a small gesture, unexpected, thrilling, and perfect. We feel the vibration of our fellow-humans when it happens, the shock of recognition—part laugh, part gasp, part cry. And we experience it together, as one, in a room, just as we will do when we put our hands together at the end, emerging at last from the experience, infused with a feeling of gratitude and wonder, knowing that we have just been made better by what we’ve seen and felt and thought.

In this dire moment of cultural fragmentation, Schreck is offering an oasis of connection, a place where humanity and learning are being celebrated and protected. She is able to pull this off, in part, because the world she presents is not one of positions and stances, but of curiosity and openness. Schreck makes real the concepts that on paper seem laughable: that we each have agency to participate in the national dialogue in healthy, productive ways; that underneath the blighted soil of today’s awfulness is a more dignified and still-accessible reality. Perhaps most incredibly of all, the show offers evidence that there are still reasons to have faith in the future of America. It’s a gift as improbable as it is welcome. For ninety blessed minutes, the world seems sane again.

“Multiverse” May Be Hospitable to Life After All