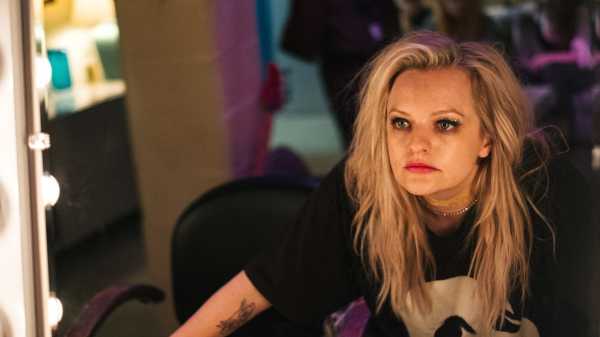 There’s a brilliant paradox at the heart of Alex Ross Perry’s new film, “Her Smell” (which opens on Friday in New York). The movie unfolds as though it were a five-act play, with each episode occurring in continuous time and in a narrowly circumscribed setting. Yet “Her Smell” is a distinctly cinematic experience, in which the dialogue (which is copious, florid, and incisive) and the performances (which are emphatic, expressive, emotionally dangerous) aren’t simply recorded but are transfigured by the film’s free, complex construction. Far from feeling small or limited, the movie fills the screen with a vast and rapidly changing emotional spectrum and a mighty torrent of incidents, making it an overwhelming big-screen experience. Despite its familiar arc of stardom, collapse, and redemption, Perry’s film is a tour de force of original direction; without a single reflexive touch or a hint of a broken narrative frame, it’s also a work of assertively personal filmmaking—and of explosive acting, with the hinges off.

The film’s star, Elisabeth Moss, in particular, brings a rare, reckless fury to the role of Becky Something, a punkish rocker in New York, some time in the nineteen-nineties, whose band, Something She, has a hit record and a major following—or, rather, the band has the hit and Becky has the following, and she has been squandering it with self-destructive behavior (which also proves destructive to more or less everyone in her fraying circle). The movie starts with an encore: Becky and her bandmates Ali (Gayle Rankin) and Mari (Agyness Deyn) charge back onto the stage to the delight of an audience chanting Becky’s name. Perry, working with the cinematographer Sean Price Williams (his collaborator on all of his films), catches the magic moment, the transformation of the private person into the public performer, the concentration of Becky’s scattershot energies into a megawatt illumination that draws her public in with an irresistible, hypnotic force.

It’s offstage that the act doesn’t work. Most of the film’s first act takes place after the show, in the venue’s warren of green rooms and corridors, where Becky, there with her bandmates, is swarmed by visitors, invited and otherwise, including her d.j. ex-husband, Danny (Dan Stevens), and their baby, Tama; Danny’s new girlfriend, Tiffany (Hannah Gross), whom Becky treats like dirt; Howard (Eric Stoltz), a record executive whose small label, Paragon Records, has done well with the band and is now reeling from their missteps; her shaman, Ya-ema (Eka Darville), and his assistant (Yusef Bulos). Becky, chemically unhinged and emotionally out of control, and having forced the cancellation of a planned European tour, doesn’t miss a chance to burn the few remaining bridges that tether her to her career and her family. She focusses the full heat of her wrath on yet another visitor, Zelda (Amber Heard), who used to open for Something She and now, a star on her own, invites them to open for her.

Becky’s musical inventiveness and her impulsive, instinctive control of a crowd is matched by the manipulative intensity of her personal relations and the vitriolic inventiveness of her dialogue—she’s equally expert at finding her target’s wounds and pouring verbal acid into them and, where necessary, at opening new wounds just for the hell of it. But in all her spray of wrath, Becky’s dialogue is also antic and playful, filled with puns and gags, repurposed clichés and childish singsongs, which Moss delivers at top speed, with the careening tone of a screwball tragedy. (Perry is one of the most imaginative writers of dialogue in the current cinema.) There’s an early example of this when Ali responsibly asks Zelda when the tour would be; Becky, furious, shuts Ali down and pugnaciously tells Zelda off. Howard, the label executive, brings champagne to celebrate the musicians’ reunion, but good luck to him. While being flamboyantly thrown out of the room, Zelda tells Becky to “Stop overreacting.” “I’m normal-reacting,” Becky answers and stumbles to the floor with the infant Tama in her arms.

Longstanding enmities and new conflicts among the musicians and their associates unfold in a closed space, ricocheting off the walls with a menacing fury. Moss’s performance imbues Becky’s scenes with an explosive energy, a seeming joy in imminent catastrophe that risks bringing her down along with anyone nearby. The second act is set in a recording studio that Howard has reserved for a session with a hopeful new discovery—a twenty-ish trio called the Akergirls (Cara Delevingne, Ashley Benson, and Dylan Gelula). Becky, who has talked her way into the recording space by lying to and pleading with the recording engineer (Keith Poulson), refuses to yield the microphone, digging deep into herself for wrenching, melancholy ballads, which she sings a cappella or with an unplugged electric guitar. (The band’s name is an amusing wink toward the late filmmaker Chantal Akerman.) In the process, she’s provoking a breakup with Ali and Mari, flaunting her stardom, boasting of her fame, insulting their obscurity. When Becky sees the new band in the booth, cooling their heels and biding their time, her expression heats to an ominous and terrifying glow, which, by the time she bursts into the booth and is introduced to them, she tempers to the radiant warmth of seductive flattery.

In the third act, another backstage scene—in which her bandmates and the Akergirls wait for the eternally unreliable Becky to show up for the concert as time is running out—the volatile mix is heightened by the presence of Becky’s mother, Ania Adamcyzk (Virginia Madsen), and a pair of local documentarians (their bulky VHS camera bearing a “Bronx Community College” sticker), who are following Becky around. (Even in the midst of physical altercations and histrionic tantrums, Becky makes sure to play to them.) Becky blasts her mother’s stalwart attempt at reconciliation into a tantrum of recriminations. Ania proves to be as adept at dishing it out as she’s accustomed to taking it. The fight, fuelled with drugs and drink, shifts from verbal lacerations to physical ones, and Becky, unfailingly aware of her eagerly awaiting audience, nonetheless very publicly hits bottom.

Williams throws his camera into this fray, with images that rove and dart, surge and whirl with a confrontational frankness. In these images no less than in the performances and the drama, “Her Smell” reveals the fusion of horror and beauty, agony and grace, the colossal emotional hunger that only the ecstasy of onstage performance, and the one-way adulation of the crowd, can provide. In conjuring that world of artistic turbulence, of creation and destruction, Perry conjures a vantage point of his own, at the eye of the storm, that’s as lucid and stunned as it is vulnerable and tenuous. (The moments of frozen stillness in the whirlwind are a credit to the sharp-eyed and rhythmically perceptive sharpness of the editor, Robert Greene, who’s also a crucial director of the time—most recently, of “Bisbee ’17”).

I described Perry’s last film, “Golden Exits,” as “Brooklyn Bergman,” and, like Bergman—who made some mighty chamber-movies, including his last, “Saraband”—Perry turns contained confrontations into pressure-cooker situations, intensifying emotion to the breaking point. Paradoxically, for a filmmaker who is resolutely secular and intricately practical, Perry nonetheless finds for his characters a Bergman-like state of transcendence, a form of grace without faith. Becky’s overreach of the soul, her demands for something extraordinary, which make a mockery and a wreck of the comfort of the ordinary, lead her to find, ultimately, a measure of desperate serenity, an authentic if fragile sense of reconciliation. By the end of the film, Becky seems to achieve a grandeur apart from any to be gained in the public eye, and the movie’s sense of intimacy, of peeking in on moments of rarefied private emotion, becomes almost sublimely unbearable.

The Silently Regressive Politics of “A Quiet Place” |