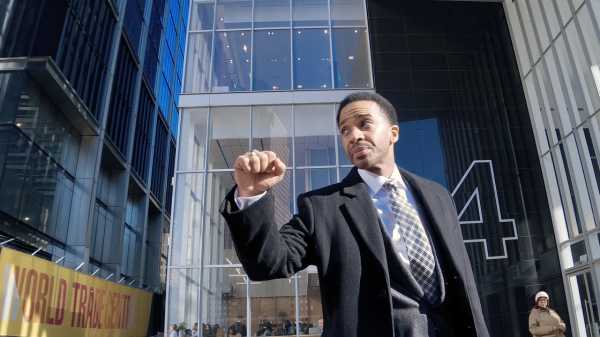 In 2009, Steven Soderbergh was about to direct “Moneyball,” the film adaptation of Michael Lewis’s nonfiction book about an effort to assemble a championship Major League Baseball team on a low budget, when, five days before the start of the shoot, the studio pulled the plug on the production. The reason was creative differences—or, rather, differences between Soderbergh’s boldly creative conception of the film and the studio’s fear that the movie he intended to make wouldn’t be commercial enough to earn back its fifty-eight-million-dollar budget.

Soderbergh’s new movie, “High Flying Bird” (which premières on Friday, in a limited theatrical release and on Netflix, and will have a special screening at Lincoln Center, on Thursday), is, in a way, the fulfillment of that aborted plan. Written by Tarell Alvin McCraney, it is a sports movie—a business-of-sports movie—in the vein of “Moneyball,” about a sports agent attempting to break a lockout of N.B.A. players by team owners. And, though the physical scale of the action is narrower than what Soderbergh planned for “Moneyball”—his reported budget was a mere two million dollars—the new film is deliciously distinctive, surpassing anything that Soderbergh was making in the studios a decade or more ago. Revelling in the freedoms that his low budget afforded him, he has made a D.I.Y. film about changing the system—about scaring it into changes—with D.I.Y. practices.

André Holland stars in “High Flying Bird,” as Ray Burke, a sports agent with a major agency, whose hottest new client is Erick Scott (Melvin Gregg), the N.B.A.’s No. 1 draft pick, selected by the New York Knicks. But, between the time of the draft and the start of the preseason, the owners, unable to settle with the Players Association on a new over-all agreement, have called for a lockout—which is to say that teams aren’t training and players aren’t being paid. The delay of income is a hardship for Erick, as it is for many other draftees and young players (all the more so because, when they were college athletes, they played without pay). Ray realizes that the owners are aware of widespread need among the athletes and are digging in their heels with the expectation that the resolve of the Players Association will falter. So he concocts a scheme that will give the owners a scare, bring them to the table, and get the season going.

“Moneyball” is a story about the business of sports. “High Flying Bird” is, too, but it’s also about the politics of sports—in particular, the politics of race and the manipulation of racial and economic inequalities to create a class of athletes, largely black athletes, who remain dependent upon teams and leagues and companies that are run by white executives. Almost all of the characters in “High Flying Bird”—agents, athletes, and others in their circle—are black. (The only major characters who are white are Ray’s boss, played by Zachary Quinto, and a team owner, played by Kyle MacLachlan—both of them, figures of power.)

“High Flying Bird” is set mostly in New York, largely in modern, hard-edged corporate offices and high-end restaurants and bars in Manhattan; it’s a movie that features the heady, intoxicating power of glass-and-steel spaces and boss-of-it-all skyscraper vistas, with an architectural movie aesthetic to match. Most of its scenes involve head-to-head conferences or confrontations, with a few powerful people making major decisions that affect many lives. It’s the kind of story that would likely have had an air of giddy hyperbole if it had been made a few years ago, but now there’s little surprise to be found in the potential of a handful of tête-à-tête meetings to barter away a republic. And Soderbergh realizes McCraney’s intricately conceived negotiations with an air not of astonishment but of energized fascination—and he delivers the characters’ passionate energies with a mighty sense of swing.

From the first scene, set in a high-rise restaurant, where Ray is trying to get Erick out of a jam of the young man’s own making, McCraney evokes a tangle of loyalties and interests terrifyingly shifting under external pressures. Soderbergh, meanwhile, bangs the scene out in brash, confrontational angles that feel like cinematic drumbeats and set an urgent tone for clashes to come. Ray’s assistant, Sam (Zazie Beetz), is trying to get out from under his mentorship while also trying to do right by the clients, the agency, and possibly even Ray. The executive director of the Players Association, Myra (Sonja Sohn), admires Ray’s visionary daring but needs to protect the players from its potential consequences. Erick, whose lack of resources makes him vulnerable, even desperate, becomes increasingly suspicious of Ray’s motives.

Others may be willing to disclose some big plot points; I enjoyed the discovery too much to spoil them. It’s enough to say that a series of coincidences involving a Twitter battle and a viral video gives Ray the idea for a D.I.Y., player-run alternative to N.B.A. competition—one that, not coincidentally, also entails a meeting with Netflix. In effect, “High Flying Bird” dramatizes the wedge of alternative distribution that streaming services offer independent producers—and the risks of taking that path. For all its forward-looking, new-media-centric plotting, the movie is anchored in a view of history—of the history of independence and imposed dependence—that, in the realm of basketball, is tainted by the monstrous politics of racist oppression.

“High Flying Bird” features one of the great characters in recent cinema, a venerable basketball coach named Spence (Bill Duke), who is Ray’s friend and mentor, and a living conscience of the sport. Spence runs a youth basketball program in the South Bronx, and an annual event he organizes for the kids—an event usually attended by N.B.A. players—is threatened by the lockout. Spence is both a walking encyclopedia of basketball history and an embodiment of it, with crucial knowledge of how white N.B.A. owners brought black players into the league and, in the process, rendered those players dependent on it. His sternly authoritative independence is realized by Duke in a passionately oracular performance that’s already salted into my year-end list. There’s another great supporting character, Emera Umber (Jeryl Prescott), the mother—and manager and agent—of Erick’s main rival, Jamero Umber (Justin Hurtt-Dunkley). She’s also a figure of hard-won, carefully planned, strongly asserted independence wrenched from the white men who run the business of the sport.

McCraney’s script encompasses, in its deft and elaborate dialectical wrangling, a vast range of historical currents and present-day phenomena—it’s a movie about the uses of digital media and the changing experiences and expectations that they incite. Its backroom confrontations are performed and filmed with an intense, ardent physicality: the actors are consistently inventive, delivering inflections and pauses, gestures and glances that render the dialogue in seemingly three-dimensional relief—and Soderbergh’s distinctive cinematography makes it emerge all the more distinctively.

As he did with the film “Unsane,” released in 2018, Soderbergh—who has long done his own camerawork, under the pseudonym of Peter Andrews—shot “High Flying Bird” with an iPhone, and it shows, for the better. With “Unsane,” I had the sense that Soderbergh was doing a technical experiment with a story to which he was relatively indifferent, and I wondered how he’d apply those skills to a subject that sparks his passion; “High Flying Bird” is the spectacular answer. Rather than waving his phone-camera about in his hand, Soderbergh keeps it, for most of the film, fixed in place, on a tripod; he emphasizes his own proximity to the actors, a mere handshake away, and also conjures their closeness to him. With a wide-angle—even a fisheye—lens, Soderbergh embraces the spaces and the views that the sleek and gleaming modern offices offer. The movie’s visuals are architectural, striated by the buildings’ hard lines, tensed by the pressures of the conflicts at hand and filled with the abstractions of language, money, and power, which feel as palpably present as wires crisscrossing the cinematic space.

One of the movie’s signal lines of dialogue is spoken by Spence, when he describes how the N.B.A. owners took control of the sport. “They invented a game on top of the game,” he says. Though “High Flying Bird” gets behind the scenes of the game on the court to reveal the one that’s played in boardrooms, there are still more games on top of that game, and the movie leaves those extra layers out. One of the movie’s recurring themes is the brevity of professional athletes’ careers and the lack of financial protection that they’re afforded if their careers should falter. The threat of injury, in particular, hovers over the action like a devil to be warded off; yet, its legal consequences (as, for instance, regarding insurance and the voiding of contracts) aren’t addressed.

This gap points to a distinguishing feature of Soderbergh’s aesthetic. One of the peculiarities of sports is that the rules are arbitrary, but they nonetheless inspire a vast set of conventions and of emotional investments. The same is true of stories. As much as “High Flying Bird” offers the distinctive gratifications of a handmade, personal cinema, it also offers the contoured clarity of a classical dramatic arc; its innovations in theme, tone, and texture aren’t matched by ones of narrative concept. For all its bold originality, Soderbergh’s film about a potential revolution in sports isn’t, so to speak, a game-changer but a new way of working with the established and familiar rules of the game.

Study Aims to Solve the Mystery Hidden in World’s Most Expensive...