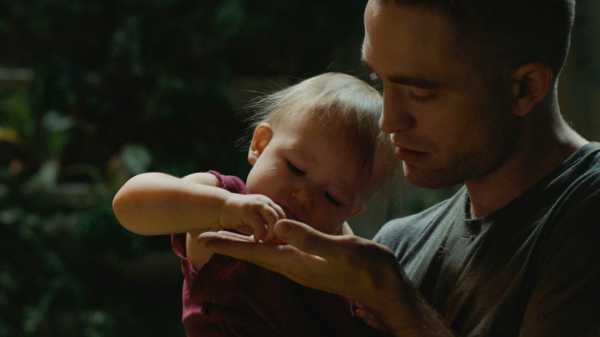 What made Claire Denis’s great 2017 film “Let the Sunshine In” (released in 2018) so thrilling was the sense that the director, at seventy, had launched herself in a new direction and discovered new ideas—ones that would be as fruitful for herself as they would be inspiring for other filmmakers. But beware the pet project: with the involvement of the high-profile actor Robert Pattinson, Denis was then able to make her new movie, “High Life,” which she’d had in mind for fifteen years, and it lets those ideas drop. Set in an indeterminate distant future, mainly aboard a spaceship on a mission beyond the solar system, “High Life,” for the most part, reflects Denis’s settled habits, and in the process it displays complacencies and assumptions that turn the film’s handful of audacities against it.

“High Life” is an intergalactic “Lord of the Flies,” a story of social breakdown among a group of marooned and isolated outcasts. But, where William Golding’s novel showed ordinary children’s moral deterioration, Denis’s film (which she co-wrote with Jean-Pol Fargeau and Geoff Cox) is also a prison movie, a drama of convicts whose efforts at redemption come largely to grief. Facing either life imprisonment or the death penalty, a group of prisoners, young adults, have accepted a virtual suicide mission—to ride a vessel into a black hole, in the hope of harnessing its energy for Earth—as an alternative punishment. The group features two officers, about a half-dozen rank-and-file participants, and one intermediary, Dr. Dibs (Juliette Binoche), who sees to their health while also administering sedatives and other pharmaceuticals that help to keep order.

The drama is centered on the tension between Dibs and another participant, Monte (Pattinson). Monte abstains from the ship’s masturbation chamber—or “fuck box,” as one participant, Tcherny (André Benjamin), calls it—which the others use, and he consistently rejects Dibs’s candid propositions for sex. Dibs, too, is a convict. She admits to having killed her children (smothering them) and her husband (stabbing him); she attempted suicide, mutilating her lower stomach, and now has what another participant, Boyse (Mia Goth), calls a “plastic pussy.” Now, aboard the spaceship, Dibs is obsessed with reproduction, harvesting the men’s semen from the fuck box and implanting it into the women, in the hope of creating a baby in space.

Denis constructs the story out of sequence; the movie begins with Monte raising an infant, a girl he calls Willow (played by Scarlett Lindsey), alone in the spaceship, and flashbacks depict the voyage that led to his paternity and their isolation. (Others show the crime that Monte committed back on Earth: he killed a girl with a rock, in a dispute over a dog.) From the start, it’s clear that the others are gone, and the flashbacks construct a sort of “And Then There Were None,” to show how the others died—and how Willow was conceived. The answer: Dibs pharmaceutically knocks out Monte, rapes him, collects his sperm, and implants it into another woman.

There are hints, early in the film, of space madness and solitary delusion, as Monte, talking to himself, maintains the basic systems of the vessel, and, alone with the infant Willow, speaks to her in a monologue that veers toward the obsessional. Declaring a plan to “jettison needless weight,” he drops the cryogenically preserved bodies of his colleagues out of the ship and into space. There’s also a hint of his paternal intentions, when he sews a small fabric doll for Willow. But hints are all there are. Because what “High Life” reveals of Denis is that she’s essentially a conservative filmmaker, not politically but aesthetically.

“High Life” is as scripty as a Hollywood drama, as rigidly determined as a television series, in which the images merely illustrate the details that are planted there to offer ready explanations or easy narrative rhymes. Monte’s memories recur throughout, but without a free play of memory; his mind neither wanders nor explores nor slips—it corresponds, as if his unconscious were a writers’ room that winks with portentous irony. Changing a panel outside the spaceship and staying in audio contact with Willow, Monte loses his composure when she cries and he drops his wrench into space—which triggers a memory of dropping a rock into a well (it’s the weapon with which he killed the girl). When Willow pokes a scar on Monte’s arm, he recalls the bleeding cut being stitched up by Dibs (the story behind the cut turns up only later in the film, in another quick flash). Later, when Willow is a teen-ager (played by Jessie Ross), Monte, having once killed for a dog, encounters another space vessel that’s filled with dogs, but he refuses to let Willow have one.

There’s peculiarly little physical process involved in Denis’s drama—her images break events down to their salient narrative details, as in the stage-managed fight scenes in superhero movies. She shows little interest in how things happen, in the incidental aspects of the events she depicts; she wants her points to be made without the distractions and loose ends that make for the fullness and the ambiguity of experience. (For that matter, the movie’s dialogue is largely expository.) The science-fiction world-building of “High Life” has some fascinating details dropped in, such as how the vessel’s velocity, near the speed of light, both creates gravity and contracts time, so that the voyage—planned to be eight years, though running somewhat longer—represents many more years on Earth. (The voyagers have reason to believe that their families and friends back home are long dead.) But the interest of this setup makes for only a few lines of dialogue and one fine moment where Monte, seeing a dim video transmission from a sunny beach, is aware that the scene is a tantalizing and poignant trace of a vanished world.

Such moments are exceptions; for all its action, “High Life” induces information hunger, because of the static way in which it drops its bits of narrative and bits of background together. The film’s intricate time scheme—framed by Monte’s raising of Willow (here, too, only in salient details) and then his bonding with her as an adolescent—far from rendering the movie complex, makes its parts fit together with a numbing facility. It’s as if the events of the film are excerpts from a master script emphasizing the most apparent and foregrounded relations that are then softened with impressionistic images, stamped with mood-stoking colors and music, and fraught with a slowed-down pace of action, to render simple actions portentous.

Many of the scenes in “High Life” depend on intimate physical action (scenes of injury, of violence, of lifting and dressing bodies). But they are filmed in ways that convey them as abstractions rather than concrete processes. Bodily fluids—blood, sperm, breast milk—are seen throughout the film, but they remain present as principles of the prisoners’ overheated, cooped-up, distorted existence, a carnal counterpart to the ship’s high-tech mechanisms and its captives’ mission. The movie’s details and themes remain theoretical, a blurred thesis about crime and punishment, about incarceration and isolation, about the occulted oppressions and subjections on which society depends. Only one scene, an already much-celebrated one, has both an air of abandon and a sense of discovery. It shows Dibs in the fuck box, straddling a metal dildo that rises from a clinical table, and its effect emerges as much in the sensual athleticism of the scene itself as in an extraordinary line reading by Binoche, when Monte scoffs, “That doesn’t seem to do you much good,” and Dibs responds, sharply, “Better than you think.” Yet, even there, the clipped montage of the moments leading up to Dibs’s erotic experience and fantasy eliminate the banal, even potentially comedic, mechanical aspects that risk breaking or foreclosing the mood. The point of the scene, as notable as it is, overwhelms its realization.

“Let the Sunshine In,” which also stars Binoche, was no less sensual, no less erotic—and, at least in terms of mental life, no less hermetic, in its tunnel view of the Parisian art world. But, as written by Denis and the novelist Christine Angot, that film’s copious, florid dialogue pressed it into a place-rooted, time-bound continuity—a sort of architecture, apart from the story and the psychology of character, that sometimes heightens and sometimes contrasts with the immediate and piercing intensities that Denis draws from it (with the help of Agnès Godard’s seemingly tactile cinematography, and the alert impulsiveness of Binoche’s performance). In “Let the Sunshine In,” Denis manipulates the element of time freely, playfully, audaciously. She seems to live the movie in real time; its ideas emerge from that experience all the more thrillingly. In “High Life,” with its lack of observation, not even the ideas remain—only their residues do.

Ian Poulter rages at Shinnecock set-up and American fans at US...

What Happens When a Small-Town Family Goes Corporate?

UK Would Not Back Israeli ‘Annexation of Parts of West Bank’,...