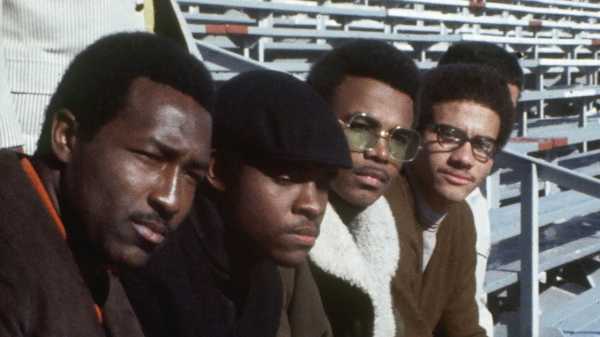 New York’s annual cornucopia of independent films, BAMcinemaFest, which begins on Wednesday night, follows the template of the New York Film Festival—some world premières along with movies first seen earlier in the year at other festivals (such as Sundance and South by Southwest). That’s why it’s a little different for critics than for viewers: the series introduces to New York some movies that some writers have already seen, so the shock of the new that this festival offers to the city’s moviegoers is somewhat buffered, yet it shouldn’t be minimized. This year’s edition offers some of the best recent films to be seen anywhere, including a trio that premièred at Sundance and that I wrote about then with grateful astonishment—Josephine Decker’s “Madeline’s Madeline,” Sandi Tan’s “Shirkers,” and Robert Greene’s “Bisbee ’17”—and Penny Lane’s documentary “The Pain of Others,” which premièred at the Maryland Film Festival. Some other noteworthy films (for instance, “Sorry to Bother You,” “Leave No Trace,” and “Eighth Grade”) are getting showcased just ahead of their theatrical release. (I’ll write about them then.) 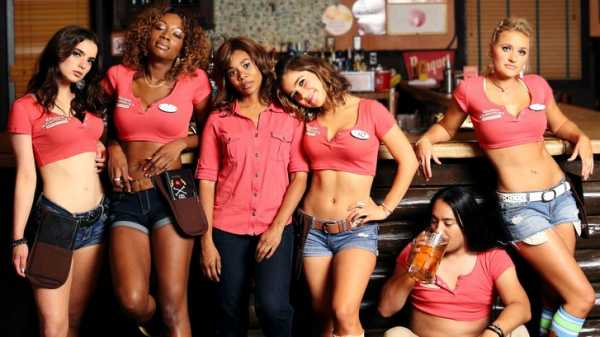 Among the festival’s best offerings is Andrew Bujalski’s brash yet analytical comedy “Support the Girls” (playing June 22). Bujalski—one of the key instigators of modern cinema since his first feature, “Funny Ha Ha,” from 2005—has always filmed with a conspicuous awareness that an independent film production is also a small business. He films people on the job, thinking about money, aspiring to something like art, seeking something like independence. He has a place alongside Frederick Wiseman and Vincente Minnelli as a cinematic scrutinizer of institutions—in his case, small-scale and local institutions, as in “Support the Girls,” where the institution in question is a Texas sports bar called Double Whammies. There, all the members of the waitstaff (they’re all young women) wear shorts and crop tops; the manager, Lisa (Regina Hall), defines their mission as “boobs, brews, and big screens,” but she also keeps it, as she says, a family place—and her conception of her job is altogether familial. She approaches her work and her colleagues with an empathetic, personal devotion that sparks the drama of the film. A server has run over her deadbeat boyfriend with a car; Lisa holds an informal car-wash fund-raiser for her legal defense, unbeknownst to the bar’s owner, Ben Cubby (James Le Gros)—and it’s not the only work issue that she’s keeping from him. The tone of the film is buoyantly, boisterously comedic, thanks especially to two staffers (played by Haley Lu Richardson and Shayna McHayle), but the sharp-elbowed humor is laced with aching tenderness, tightrope-tense frustrations over money and love, and an underlying mix of social pathologies that bubbles through the show-biz surfaces—and that Bujalski raises to an antic pitch of sublime rage. 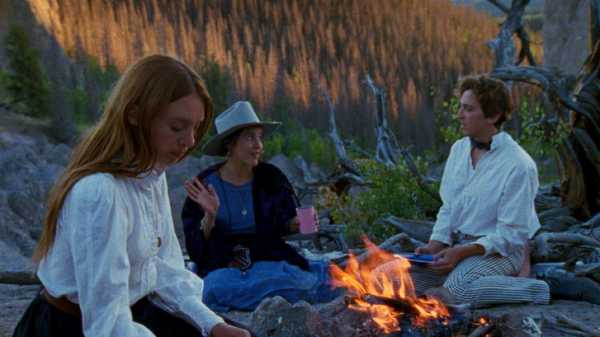 There’s an ongoing trend to revive the art of Westerns, but the most imaginative and visionary recent addition to the genre is “Two Plains & a Fancy” (June 28), directed by Whitney Horn and Lev Kalman. The film is set in 1893, and was made for an apparent pittance, and its low-budget, low-fi inventiveness is more than part of its charm—it’s central to the film’s realm of ideas. The movie is a comedy of sorts; its faithfulness to the tropes of the Western is realized, at first, in winks—but it soon turns breathtakingly serious without sacrificing its wit. A trio of urbane travellers—Ozanne Le Perrier (Laetitia Dosch), a French geologist; Alta Mariah Sophronia (Marianna McClellan), a spiritualist; and Milton Tingling (Benjamin Crotty), a dandyish artist—reach a desolate Colorado outpost, where they’re searching for a spa that’s renowned for its hot springs. In the course of their journey, they encounter another peculiar set of wanderers, including a sympathetic rancher (Michael Murphy), a Francophone Native American woman (María Cid Avila), a pair of time travellers (Crotty and Alex Decarli) who’ve come from the future and brought their inventions, and a pair of cowboys (André Frechette and Travis Nutting) who give Milton his first gun. But, above all, their travels give rise to discussions, which are centered on their areas of expertise and passion and map the expanses of the wide West upon the three dimensions of science, spirituality, and art. The script (by Horn, Kalman, and Sarah Dziedzic) is replete with whimsical riffs of philosophical depth; Horn does the cinematography, which looks at iconic landscapes with a spontaneous curiosity that’s amplified by the geological analyses that Ozanne seemingly tosses off—but that retroactively and decisively change the way that Hollywood’s classic Westerns look. Alta Mariah, with her conjurings and séances, gives a new meaning to the concept of a ghost town, and—with special effects of a startling simplicity—the filmmakers launch the action into cosmic realms. 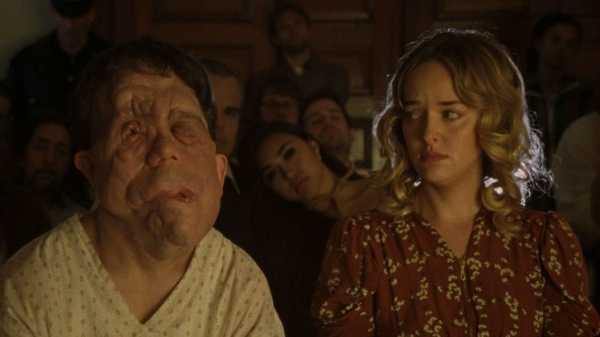 Aaron Schimberg’s movie-centered movie “Chained for Life” (June 24) also relies on cinephilic insights to evoke a society both made and warped by its movies. It’s the drama of the making of a feature film, a sort of horror-romance, by a European director (Charlie Korsmo) working for the first time in the United States. That film-within-a-film stars an actress named Mabel (Jess Weixler), playing a blind woman in a romantic relationship with a man who has a facial deformity, played by an actor named Rosenthal (Adam Pearson). The film-within-a-film is set in a single location, an abandoned wing of a hospital, where most of the on-set and off-set action takes place. The drama involves both the making of the film and the offscreen relationships between cast and crew—and, in particular, the friendship of Mabel and Rosenthal. Many members of the cast, playing fellow-patients of the doctors treating Mabel and Rosenthal, have physical differences (including a burn victim, conjoined twins, a dwarf, and a giant), and Schimberg anchors his movie on the horror-inducing, antipathetic view of them that the film-within-a-film (like a wide range of movies throughout history) both depends on and perpetuates. Borrowing tropes from Rainer Werner Fassbinder’s “Beware of a Holy Whore,” Georges Franju’s “Eyes Without a Face,” Douglas Sirk’s “Magnificent Obsession,” and many other films (and including an extraordinary dream sequence), Schimberg creates a melodrama that reflects on the terms of melodrama while also pointing toward a grass-roots cinematic revolution—movies made by people about their own experiences. 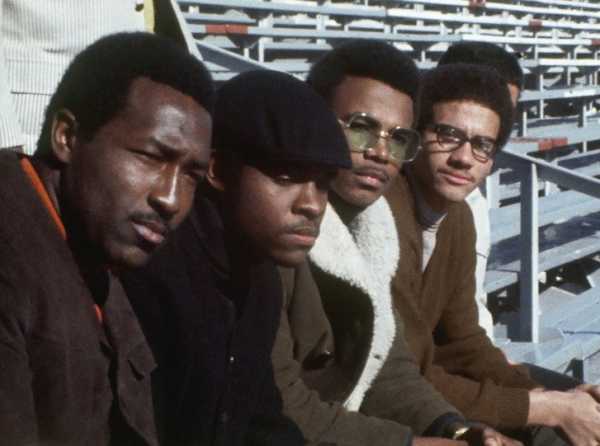 Darius Clark Monroe’s short film “Black 14” (June 23), like Lane’s “The Pain of Others,” is a found-footage film. Where Lane relies on YouTube videos, Monroe (the director of “Evolution of a Criminal,” from 2014) builds his movie entirely from archival news footage, and the result is revelatory and infuriating. It’s the story of fourteen black students at the University of Wyoming who, in 1969, were members of the school’s varsity football team. When the team was playing against Brigham Young, these fourteen men sought to protest the Mormon church’s racist policies. In response, their coach kicked them off the team; they responded by leading a public protest, which was widely opposed by white members of the university community. Monroe builds this story with an insightfully culled and cannily organized range of footage that both puts the fourteen students’ voices front and center and makes clear the widespread societal resistance—as much in media as in government—that they confronted. In the process of illuminating a relatively obscure corner of modern history, Monroe reflects its underlying inspirations—the overt political statements of athletes functioning in a milieu that, by attempts to enforce silence, is no less political—into the present day. (I hope that Monroe will expand this short film—of which Spike Lee is the executive producer—into a feature.)

Pentagon Does Not Know Where COVID-19 Originated – Chairman of Joint...

China Abandons Plan to Investigate Death of Its Ambassador to Israel,...

Is GPS really ruining our brains?