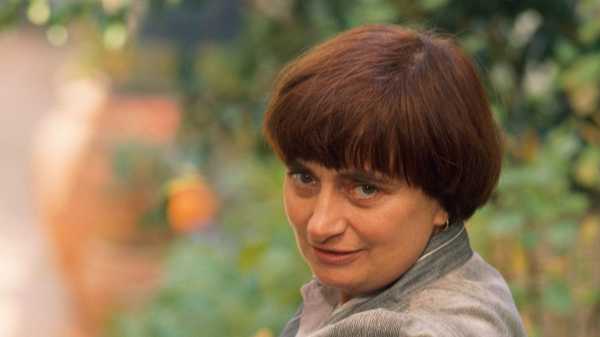 The sublime originality of the work and the life of Agnès Varda, who died in March, at the age of ninety, provides her last film, “Varda by Agnès” (screening October 9th and 10th), with both its subject and its form. It’s a personal journey through her career, centered on a series of public lectures, interviews, and conversations that mesh with clips from her work—museum installations and videos as well as movies—and with staged sequences that provide a theatrical context for her reminiscences and reflections. “Varda by Agnès” is a fitting valedictory work that, in its retrospective illuminations, nonetheless pushes Varda’s own aesthetic relentlessly forward: it’s an exemplary illustration of the very concept of the auteur, of the director as prime creator, an idea which—though she was never a critic and never advanced it in theory—her body of work exemplifies as strongly as anyone’s has done, now or ever.

While discussing and ranging through her films and related creations, Varda displays their extraordinary variety, which stretches from symbolistic documentary shorts to dramatic features (including science fiction, romance, and feminist history) to autofictions to metafictions to portraiture (both fictionalized and not) and self-portraiture to personal documentary investigations, as well as multichannel video installations and gallery creations (including shacks made of strips of film taken from archival prints of her movies). She also reveals what holds them together: the distinctiveness of her aesthetic and the originality of her ideas—or, to put it more simply, the force of her personality, which, she realized early in her career, is inseparable from her very presence, from her personal style. Most great directors are also great actors who usually reserve their performances for their cast and crew, offscreen. It’s a crucial element of the modern cinema for directors to bring their performances as themselves onto the screen; they are their own greatest creations. Varda, one of the crucial modern directors, long made herself, and the persona that she creates, an integral onscreen part of her work. In “Varda by Agnès,” she commands the screen magnetically—and, with her reminiscences, she casts her aura back throughout all of her films, as if retroactively appearing in every one of them.

The French director Mati Diop, for her first feature, travelled to Senegal—where her father, the musician Wasis Diop, as well as her uncle, the filmmaker Djibril Diop Mambéty, were born—to make “Atlantics” (October 9th and 10th), a drama that compresses an extraordinary range of themes, tones, and ideas into its hour-and-three-quarter span. It’s a tale of women’s struggle for freedom—a young woman in Dakar named Ada (Mame Bineta Sané) is in love with a construction worker named Souleiman (Ibrahima Traoré) but is about to enter into a marriage, arranged by her parents, with a rich businessman named Omar (Babacar Sylla). It’s a story of political corruption—Souleiman and his colleagues are being cheated of their pay by a well-connected boss. It’s a story of poverty and migration—Souleiman heads clandestinely to Spain in a rickety boat. It’s a crime story of romantic passion—Omar’s house catches fire and a young, by-the-book police inspector suspects Souleiman. It’s a ghost story—Souleiman is believed to be dead. And Diop films this teeming story with a unique sensual intimacy, embracing the polyphony of faces and voices in a truckful of laborers, a houseful of celebrants, a clubful of revellers, a family confrontation, a police investigation, a daily scene of streetside business—and displaying richly textured, hypnotically detailed views of the cityscape and the seascape that unite documentary and subjectivity, the meticulously local and the rapturously cosmic, in a work of incisive and bitter sociopolitical affirmation.

Theo Anthony, whose documentary “Rat Film,” from 2016, advanced from an encounter with a single rodent to probing historical analyses and utopian political speculations, directed “Subject to Review,” an episode of ESPN’s 30 for 30 series, which screens October 9th and 10th in the short-film “Documentary” program. Here, Anthony also begins with a phenomenon of narrow scope—the video setup, called Hawk-Eye, that has been in use since 2006 as the final arbiter of line calls in professional tennis—and expands it to explore fundamental questions in the game and in society at large. Like his earlier film, “Subject to Review” blends history with firsthand investigation, as Anthony directs the voice-over actor, Michael Grant, on camera, in the recitation of the filmmaker’s text, about the history and theory of photographic verification of sports results. The study ranges from the nineteenth-century work of Eadweard Muybridge in confirming the results of horse races to the comparison of lines in the abstract to their practical application in tennis. In his consideration of the modern history of umpiring and its ambiguities, Anthony describes the connection between televised instant-replay and courtside decisions: “A visual system initially developed to enhance entertainment becomes a tool for enhancing justice; justice and entertainment converge.” His meticulous onscreen analysis of Hawk-Eye technology, and his examination of its links between video and software, recording and programming, visual specificity and algorithmic interpolation, begins with considerations of the practicalities of sports (with reference to particular events) and becomes a potent philosophical reflection on epistemology, indeterminacy, and the legitimacy of authority.