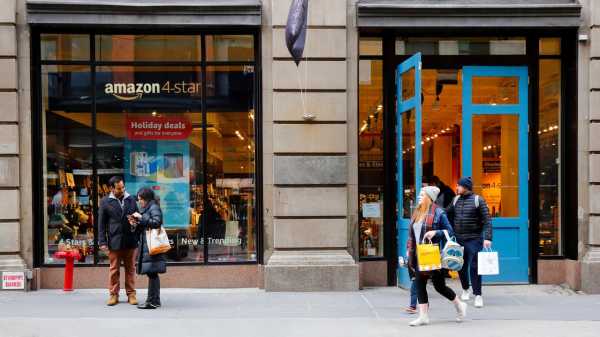 Is there any good reason to step outside? The climate is dicey and you can’t count on a Wi-Fi connection. Besides, everything your heart desires can be whisked to your door by clicking “Buy Now.” These days, boxes are delivered to my apartment with such frequency that I’m tempted to order a second home to hold them. Amazon sells fully furnished refurbished shipping containers, complete with bedroom, shower, toilet, and kitchenette, for thirty-six thousand dollars, but then I’d need bedding, pots and pans, and a shower curtain. What I probably need is Amazon Not Now or Amazon Rehab, but that is not the direction the company is heading. Instead, to coax consumers into consuming more, it is finding ways to lure us even when we’re offline. In late September, it opened Amazon 4-star, a physical store in SoHo (72 Spring Street) with a door and checkout registers and a restroom and the works, and containing only merchandise which has received a four-star average rating or above on the Amazon Web site. Is “popular stuff” a good model for stocking a store? And if so, why not reach for the stars—all five of them—and carry only the very best?

When I visited Amazon 4-star one recent afternoon, the four-thousand-square-foot space was filled with a sizable crowd. My first reaction was, “Maybe they haven’t opened yet and all these people are here to help them get ready.” Yes, there are signs printed in the unmistakable Amazon font and placed on tables and shelves, indicating sections such as “If You Like Entertaining . . . ,” “Wizarding Wonders,” and “Amazon Exclusives.” But the place looks distinctly un-designed and disorganized, like a pop-up shop of stolen goods that just fell off the getaway truck. “I like the store,” a young man told me. “But if you come in for something specific, forget about it.” He’d wanted to buy a so-called ugly sweater to wear to a holiday party. (Amazon 4-star does not carry apparel.) “It’s the same shit, but it’s better than staring at your iPad all day,” a guy said, while buying a package of Drinking Buddies, a set of six little plastic hunks, each wearing skimpy swimming trunks in a different color, meant to hang on your glass so you don’t mix it up with someone else’s. “It’s like a grocery store,” a woman in her twenties, who was in town from Denver with four friends, said. “Oh, my God!” one of them shrieked. “This is the hair dryer that the girl with the baby who we met last night told us to buy!” How’d the girl’s hair look, her friend asked. “O.K.”

Never have I felt so in need of a search engine. “Candles & Home Décor” is self-explanatory enough, but what do you think “Life on the Go” means? Gifts for joggers? Or for friends in witness protection? What I found was mostly thermoses and some hand warmers. Why are Yankee Candles (in Christmas Cookie scent) sitting on the same table as a stainless-steel electric kettle and Michelle Obama’s “Becoming”? Because they’re all, according to the sign, “Top Selling Around NYC.” This is not to be confused with “Trending Around NYC,” a separate table that also features Obama’s book, as well as the Remington PG6025 All-in-1 Lithium Powered Grooming Kit with Trimmer and the Himalayan Glow Pink Crystal Salt Lamp, which, according to one rave review from an Amazon.com customer, displayed next to it on a little card, makes it easy “to get up and go to the bathroom without falling over.” The lamp can be spotted in multiple locations in the store. You will find it as soon as you enter, on the “Most-Wished-For” table, where desiderata include a Harry Potter Kano Coding Kit with instructions about how to build a wand, a LifeStraw Personal Water Filter, and the self-help memoir “Girl, Wash Your Face: Stop Believing the Lies About Who You Are So You Can Become Who You Were Meant to Be.”

Rest assured that wherever you are in Amazon 4-star, you are never more than a few feet from an Amazon Echo, and because the smart speaker is accompanied by a sign that says, “Try Me,” there is a good chance that while browsing you will hear the voice of Alexa, announcing the weather ad nauseum. You might also hear, as I did both times I visited, the beeping sounds of a security alarm going off accidentally in the “Smart Home Monitoring” area. Don’t be concerned if you detect the faint whimpering of a baby. It has nothing to do with the mother walking hurriedly through the store calling, “Daniel? Daniel?” It is furReal Munchin’ Rex, a toy dinosaur that can make thirty-five different sounds.

To be fair—no, never mind. Amazon does try to provide guidance for shoppers who are feeling lost in the hodgepodge. The store is well-staffed and all the salespeople I talked to were pleasant and solicitous. Many of the features from the Amazon Web site have been adopted here to help you narrow your choices. A sign saying “If You Like,” for instance, points to the book “You Are a Badass,” while a neighboring “You’ll Love” sign points to the book “The Subtle Art of Not Giving a Fuck.” As I left the store, passing rows of Echos, Kindles, Fires, and appliances that can be controlled by Alexa, I heard a man tell his friend, “The problem is, my entire house is Google, not Amazon.” The friend replied, “Does Google have a store yet?”

‘He Would Like to Be a Dictator’: Soros Slams Trump, Urges...