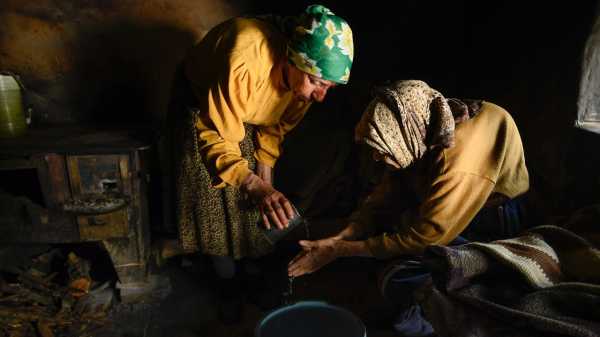 The documentary “Honeyland,” about a beekeeper in rural Macedonia whose livelihood is threatened by the actions of new neighbors, has many of the virtues of a good dramatic feature. Its narrative construction depicts extraordinary tensions and conflicts with a clarity and coherence that a screenwriter might dream of. At the same time, the film’s dramatic power comes at the expense of the reportorial side of documentary filmmaking. It’s as if the filmmakers, Tamara Kotevska and Ljubomir Stefanov, recognized the allure of their subject as the action unfolded, and then, whether in the filming or in the editing of their footage (four hundred-plus hours’ worth, cut down to an eighty-seven-minute feature), molded it to familiar forms of movie drama. The result is a film that’s in equal measure gripping and frustrating, a work of nonfiction in which the elision of many factual elements, in the interest of compact dramaturgy, makes an extraordinary true story feel fabricated.

A woman carrying a bundle on her back is seen, from far above, walking alone on a desolate plain along a path cut unevenly through dry grass; and then from below; and then, again, from a different high angle. She reaches a steep rock face by climbing on a narrow ledge onto which the camera operator follows her, too. As I watched the woman approaching the rocks, pulling a honeycomb from a dark compartment behind a stone plaque, and scooping bees by the cupful into a basket, I found myself wondering what she thought of the filmmakers who were following her on this perilous mission—how she and they arranged the shooting, and, from a Heisenbergian perspective, what effect the filmmakers’ presence had on her activities and her ideas.

The woman’s name is Hatidze. (Her last name, Muratova, is seen in the end credits.) She was born, she says, in 1964; she has, apparently, spent her entire life in this craggy farm region of the former Yugoslav republic. She lives with her mother, who’s bedridden and ill, in a stone house with no electricity or running water. Her mother, Nazife—whose name is never heard in the course of the film—has an oozing and apparently sightless eye and a grave bleeding wound near it, on the side of her face, which is bound with a compress and a towel. The family is of Turkish ethnicity, and speaks Turkish. Hatidze, who never married and has no children, ekes out a living for herself and her mother by keeping bees and gathering and bottling their honey. Hatidze’s methods are intimate and humane; she’s endowed with a loving touch that, seemingly, the bees recognize—she works with them barehanded and appears never to be stung. She speaks to them and sings to them, but, above all, she nurtures and nourishes them, telling them, “half for you, half for me”—she doesn’t deplete their supply of honey to maximize her short-term income but treats the hives that she sustains on another rock wall, alongside her home, with familial care.

Hatidze and her mother live in apparent isolation, without friends, other family, or neighbors. Then a string of trucks and a trailer struggle along a road to another stone house, diagonally across from hers—the Sam family, also of Turkish ethnicity, including a mother (Ljutvie), a father (Hussein), and seven children, ranging from toddlers to preteens. The family raises cattle and brings with it a large herd, and the family quickly befriends Hatidze. She plays with and teaches the children, talks with Ljutvie and Hussein, and, when he visits her, shows him her hive. Hussein asks her about money—what she gets for her honey—and, with that apparently innocent question, it’s obvious, after a very gradual and protracted setup, that the drama is about to begin. Approximately ten euros per jar, she responds, and, if “Honeyland” were a cartoon, Hussein would suddenly get euro symbols in his eyes.

Moments later, he’s seen unloading from a truck a set of boxes and frames used in commercial beekeeping. Hatidze, friendly and helpful but also wary, cautions him to leave half of his honey for his bees—because otherwise they’ll attack her bees for their honey. It’s no spoiler to relate that this is exactly what happens, though the way that it happens—in its effect on Hatidze and her mother, in the commercial details that drive Hussein to mercenary despair, and in its effect on relationships within the Sam family, too—unfolds with a novelistic intricacy and tightly sprung dramatic mechanism. Just in outlining the conflict here, I find myself caught up again in its destructive power, its brewing enmities, and its overarching, tragic sense of the disturbance of cosmic order.

Yet there is a price—or, perhaps, not a price but merely a needless sacrifice—that comes with tying this mighty narrative knot. Kotevska and Stefanov give little sense of the surrounding world in which the film’s participants live, and what the filmmakers do show tends to frustrate rather than satisfy the viewer’s curiosities. Hatidze travels by train to the country’s capital, Skopje, to sell honey, sitting on the trip, as if by calculated cinematic contrast, next to a teen punk with spiky green hair. Speaking with one of her retailers, who is Albanian, she says that all the other Albanians and Turks have left her village, that she and her mother are the only ones left. But we never find out what kind of crisis or what circumstances led to this exodus, or how isolated Hatidze’s life actually is. (Members of her family are thanked in the film’s credits, but they are never shown onscreen, and it’s never clear whether Hatidze and her mother have any contact with them.) Her life is depicted as one of complete autonomy, as if her rocky corner were long untouched by any civil authority. Yet a scene of great dramatic significance involves the intersection of legal and medical matters, though the filmmakers show no contact between the movie’s subjects and the officials or professionals with whom they’ve apparently had dealings.

Hatidze’s solitude is one of the film’s prime subjects and also its dramatic mainspring, and its details and practicalities are merely hinted at, and utterly unexplored, throughout. One of the Sam boys becomes Hatidze’s companion in her apiary adventures, and in one conversation she laments that she doesn’t have a son like him. Not long thereafter, Hatidze asks her mother why she turned down offers of marriage that were brought for Hatidze, long ago, by a matchmaker. Nazife gives a poignant response—that she didn’t turn the offers down, but Hatidze’s late father did—but the exchange has a contrived feeling. Has she never before confronted her mother on this central life matter? We don’t know, because the filmmakers wouldn’t dare disturb the sealed-off observational purity of their storytelling with even so much as an interview question.

Much of the movie is filmed in the Muratova home; Hatidze displays the daily details of her domestic life and her labors to the filmmakers, who must have virtually lived with her for three years while they were filming. But even the terms of their complicity, the relationship that they and Hatidze share, remains a frustrating blank. (Was she instructed never to look at the camera?)

Eliding the modernity of Hatidze—the bureaucratic ties that bind her to the administrative state, the sense of extended family, of friendships, of politics, of personal history—has a strategic effect on the film. The filmmakers establish an agrarian fantasy of perfect rustic isolation, a place of Edenic purity in which more than Hatidze’s own loving enterprise, her livelihood, is threatened—what’s spoiled is paradise itself. It’s as if the reality of Hatidze’s life and work, the practical relationships of filmmaking, were too messy and ambiguous for the filmmakers’ tidy hermetic schema. This is no mere theoretical quibble of documentary form; it’s the relationship between experience and cinema, between what's happening and what's seen. It’s a relationship that, despite their daring, perceptive, nuanced, and empathetic work, the filmmakers didn't respect.

Daniel Ricciardo should resist Ferrari and Mercedes to stay at Red...

Afghan Authorities Release at Least 100 Taliban Members From Prison in...