Home Culture How Americans Acquired a Taste for Haggis, with Help from the Scottish... 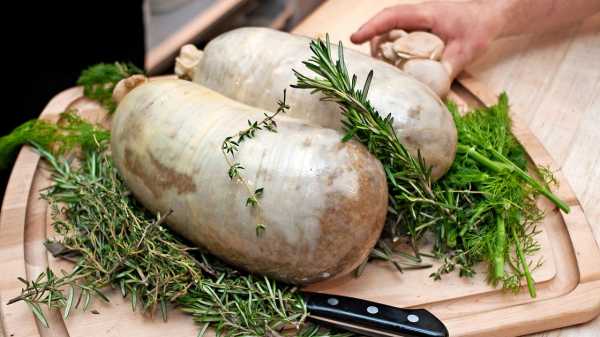 When Anne Robinson and Andrew Hamilton founded their catalogue-order business, Scottish Gourmet, in 2005, they were focussed on importing luxury Scottish foodstuffs for American consumers: smoked salmon, grouse, pheasant. Hamilton, an Ayrshire-born chef, was active in promoting locavore food for the Scottish National Tourist Board; for a time, he’d been known as the man who brought the langoustine to New York. But no sooner had the company set up shop than demands for a humbler item began rushing in. “The next year, the cry got worse!” Robinson told me recently. “I said, ‘Andrew, there’s no good haggis in America; they want their haggis.’ ”

Traditional haggis, the Scottish pudding-like sausage made with oatmeal and sheep’s “pluck” (heart, liver, and lungs) and encased in the animal’s stomach, has long been effectively banned in the U.S., because the U.S.D.A. prohibits the sale of lung for human consumption. Even if it were allowed, it would not be an easy sell. Outside of its native country, the dish has often served as a punch line. The writer Laurie Colwin characterized its reputation as “dire.” It may be one of the few foods one can still unilaterally dismiss without being accused of a lack of sophistication. In any case, it’s true that, for the squeamish, the sight of a boiled, unsliced haggis—which has something of the aspect of a massive, engorged maggot—will require a few whiskeys.

Once a year, though, haggis finds a customer base beyond its homeland, as the centerpiece of Burns Night, a celebration in honor of the eighteenth-century Scottish poet Robert Burns, who immortalized the dish in his “Address to the Haggis” (“Fair fa’ your honest, sonsie face, / Great chieftain o’ the puddin-race!”). The holiday officially takes place on January 25th, the poet’s birthdate, but is observed throughout the month. By the New Year, any Caledonian society, St. Andrews assemblage, or Scottish-themed restaurant worth its salt has a standing order. Orders for Burns Night account for ninety per cent of Scottish Gourmet’s January sales. “Six hundred packages last week, and eight hundred this
week, with time built in for potential snow delays,” Robinson, who is a native of Akron, Ohio, said. “I never would have dreamed that I’d be the queen of haggis.”

For American haggis producers (Scottish Gourmet is one of at least six), the challenge is replicating the pudding’s distinctive consistency under the hairy eyeball of the U.S.D.A. “In the U.K., the lungs are critical for the texture; they keep the fat from binding together and keep it crumbly,” Robinson told me. “If you just combined lamb and oatmeal, and some spices and onion, it would clump together—like dog food.” At Scottish Gourmet, which recently relocated from New Jersey to larger facilities in North Carolina, the trick is to substitute grated poached beef liver, which serves a similar textural function. The Dobbs Ferry butcher Andrew Campbell told me that his “bastardized version” involves liver, kidneys, and heart. The offal-forward chef April Bloomfield, who has been known to host Burns suppers at the Breslin, said that “good, fresh steel-cut oats, lightly toasted with hogget meat, liver, kidneys and spices, stuffed into a bung and cooked for a few hours,” will produce a haggis that is “perfectly sound.”

Typically served with “tatties” and “neeps” (potatoes and turnips or rutabaga), haggis is a true peasant food, a dish magnificent in its humility—the lamb’s haunches, after all, would have been traditionally reserved for more rarified tables. As such, its glorification was in keeping with the work of Burns, the Ploughman Poet, whose poems conveyed a respect for the honest toil of his fellow-countrymen. 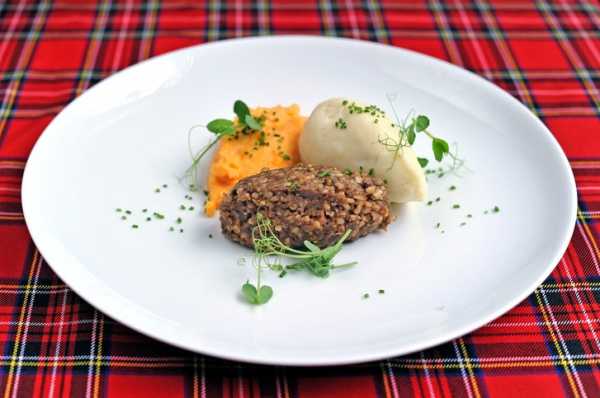 Haggis served with “neeps” and “tatties” (turnip and potatoes) at Highlands, a contemporary Scottish gastropub in the West Village of New York City.

“We’ve been doing Rabbie Burns suppers for the past ten years,” Mary Wan, the Glaswegian proprietor of Highlands, a Scottish restaurant in the West Village, told me. “At first, it was mostly expats, Scottish people wanting a wee taste of home. But now it’s lots of Americans, as well.” Wan estimates they’ll go through a hundred pounds of Scottish Gourmet haggis this week. “By and large, New Yorkers are quite adventurous— as I always say, they do eat hot dogs!” she said, but added, “We do offer a taster portion, so people can make sure they like it before committing.”

Burns Night’s waggish combination of challenge eating, whiskey consumption, and Instagram-worthy pageantry can only have helped raise its profile in the digital age. And perhaps the embrace of nose-to-tail fare in recent years has helped to rehabilitate haggis’s reputation. Only recently, Andrew Zimmern overcame a lifelong aversion to the dish to tout a venison haggis on his show “Bizarre Foods.” (Scottish Gourmet has since added a venison version to its catalogue.) Haggis fusion, too, seems to be in its infancy. “I talked to someone about haggis tacos,” Robinson said. “Someone else was making a haggis fritter.”

For many, though, it remains a comfort food, pure and simple. “There’s nothing more satisfying than addressing the haggis the moment you plunge the knife in and cut deep,” Bloomfield told me. “A plume of hot meat and spicy aromatics disperses into the air that really touches and warms the soul.” As a late-in-life convert, I can only describe haggis as the ultimate cold-weather meal: warm and hearty, easy to spoon up, and straightforward enough in flavor to make an exhausted palate sigh with relief.

For those who remain haggis-resistant, Burns Night offers other pleasures. Since the first recorded celebration, on the fifth anniversary of the poet’s death, in 1801, the evening has hewed to the same ceremonial sequence: a haggis borne in to much fanfare, and frequently amid a good bit of piping; a rousing “Address to a Haggis,” and a codified program of welcomes, graces, toasts, and recitations. The American writer and whiskey connoisseur Rosie Schaap is a proponent of the Rabbie Burns cocktail, which combines Dewar’s, Benedictine, and vermouth. “Shouldn’t every nation’s major holiday celebrate a poet?” she said. “That seems right to me.”

What Trump has done to the courts, explained