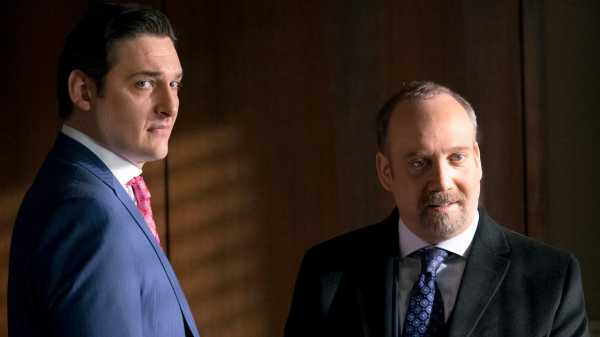 For nearly three seasons, the Showtime drama “Billions” has been structured as a classic cat-and-mouse tale, a story of attack and defense between the impossibly powerful U.S. Attorney Chuck Rhoades (Paul Giamatti) and his nemesis, the impossibly powerful hedge-fund billionaire Bobby “Axe” Axelrod (Damian Lewis). Chuck pursues an exhaustive federal case against Axelrod and his fund, Axe Capital, driven less by any direct evidence of wrongdoing than by a dogged jealousy—Chuck’s wife, Wendy (played, with beautifully deadpan intelligence, by Maggie Siff), is an employee of Axe Capital and one of Axelrod’s most intimate confidantes. There is, of course, plenty of wrongdoing for Chuck to uncover (“Billions” takes as axiomatic Honoré de Balzac’s observation that behind every great fortune is a great crime), and Axelrod uses his considerable financial resources twisting the world in knots to avoid being grazed by the sword of the righteous. On Chuck’s side, the game involves shady evidence-gathering tactics, flagrant witness manipulation, and copious back-room dealmaking. On Axe’s side, bottomless pockets are used to reward friends, eliminate problems, and settle old scores. Flying private to hang out with Metallica? You got it. Planting a camera in a government employee’s bedroom in order to blackmail her with a sex tape so that she’ll hand over inside information on Chuck’s case? Consider it done. (Spoilers abound from here on in. If you haven’t started watching the show yet but plan to start: yes, the first scene of the first episode is off-puttingly corny. It gets a whole lot better from there.)

In the middle of its third season, which ended on Sunday night, “Billions” took an audacious narrative turn. Over the course of three hyper-dense episodes, Chuck’s case against Axelrod finally goes before a grand jury, and an overzealous Axe Capital employee submits evidence intended to get his boss off the hook but instead which implicates Axelrod, Wendy Rhoades, and Rhoades himself as co-conspirators—suddenly, if one of the three goes down in flames, they all do. The former enemies (and the woman they’re both devoted to) now come together in an alliance of devastating efficiency, tampering with witnesses and blackmailing and fabricating evidence to get the case dismissed entirely. The effort works, and all three are saved from jail. It was a shock to see the story that had propelled the entire series wrap itself up—in a midseason episode, no less!—with this tidy sidestep, neither side triumphing over the other. But that, perhaps, is how these cat-and-mouse games are meant to end: if one man wins at the other’s expense, it’s an upset to the pattern, a disappointment to the fifty per cent of our hearts we’d dedicated to his nemesis.

As a saga of glittering financial warfare, “Billions” is seemingly lab-engineered to appeal to the very people it claims to be about. It’s a viciously fun and funny show, with high-concept set pieces that seamlessly weave in real-life references—each episode is studded with celebrity cameos, buzzy restaurants, and rapid-fire pop-culture riffs destined to be drunk-recited at Wall Street happy hours for years to come. (The show’s co-creators, Brian Koppelman and David Levien, are also the writers of the terrific poker movie “Rounders,” from 1998, which has achieved a similar bro-quotation immortality.) Money types view Axe, in particular, as a role model, his ruthlessness and his Teflon resistance to ethics not bugs but features, a Gen-X Gordon Gekko in a blue cashmere hoodie. (Lawyers, it seems, have as a category been less inspired by Chuck—in the law, unlike in the world of high finance, the shameless performance of vice is not its own form of virtue. At least not in public.)

But over time the show begins to pick apart Chuck and Axelrod’s scheming, lingering longer on consequences both material and moral. It dissects not just their nefarious machinations but their wealth, their whiteness and maleness, the incestuousness of their shared world of power. Few episodes of “Billions” pass the Bechdel Test—the show exists almost entirely within very male spaces (often literal ones, such as locker rooms, or cigar-filled lounges at the Yale Club)—but this isn’t a thoughtless default on the part of the writers. The show is a pointed examination of the ways men posture and grandstand for other men, and the deep damage that can cause. Despite investing in aggressive promotional campaigns for earlier seasons, Showtime never quite managed to get “Billions” a seat at the table of television darlings—it was a prestige TV show scrambling to find its prestige audience. Now critical mass is building. That pay-cable show about the pissing contest between the rich lawyer and the rich hedge-funder is, it turns out, one of the most sneakily progressive and feminist hours of television on the air.

The second half of the third season also brought to the fore two new, towering villains, one for each man: Grigor Andolov (a giddily menacing John Malkovich), a casually terrifying Russian oligarch whose liquid assets Axe needs to reëstablish his hedge fund’s supremacy, and Waylon “Jock” Jeffcoat, the Attorney General of the United States and thus Chuck’s boss, a caricature of gleeful Trumpian malevolence who decides to take a keen personal interest in the cases Chuck and his office pursue. These supervillains are balanced, on the other side of the hierarchy, by an increased focus on Chuck and Axelrod’s respective protégés: the ambitious Assistant U.S. Attorney Kate Sacker (Condola Rashad), with whom Chuck is scheming to bring down Jeffcoat. And there’s the financial savant Taylor Mason, a second-season addition to the show who quickly became a fan favorite. Taylor—who is played with Vulcan intensity by Asia Kate Dillon, is the first major gender-nonbinary character on a mainstream American television show, and uses the gender-neutral pronouns “they” and “them”—entered Axe Capital as an intern and flew up the ladder to sit at Axe’s right hand. (The show incorporates Taylor’s gender unquestioningly, and often finds great narrative power in the fluidity of their androgyny: a key scene emphasizing their ascension to Axe’s inner circle takes place in a steam room, otherwise full of naked, extremely masculine men.)

At the end of Season 3, the show’s power dynamics are dramatically inverted. The penultimate episode ends on a cliffhanger reveal: Taylor has been secretly working behind the scenes to launch their own fund, a direct rival to Axe Capital, and they’ve arranged a meeting with Andolov to fund it. In the finale, after starring in a fund-raising pitch for Axe, Taylor convinces the investors to divert their billions from Axe’s coffers to their own. Andolov offers to remedy Axe’s humiliation by having Taylor killed; when Axe responds with a delicate refusal, Andolov pulls his investment from Axe’s fund to turn it over to Taylor (“How can I keep my money with a man who won’t kill for it?”) and defangs any of Axe’s plans to exact revenge on Taylor by pointing out—with almost offhanded menace—that Andolov’s own money is now on the line. Meanwhile, Chuck’s plan to bait his evil boss into an obstruction-of-justice charge big enough to bring down an Attorney General is explosively undermined, when it’s uncovered by his bitter former employee Bryan Connerty, who’s happy for any excuse to bring Chuck down. Chuck, walking into his office for what will turn out to be his dramatic and humiliating firing, is confronted by Sacker, who has thrown her lot in with Jeffcoat and his anti-Chuck allies: “You recognized I was a political animal,” she says. “You fed it. Nurtured it. And I warned you it might bite you. That’s where we are.”

In the end, both men are defeated—each entirely undone by an end-run collaboration of his protégé and nemesis. Chuck, who wielded the might of his public position like a war hammer, is without a pulpit; Axe, now presiding over a hedge fund of dust and tumbleweeds, has been stripped of his invincibility. It’s unclear how, in the coming fourth season, Chuck and Axe could work together to rebuild their might—in the third season’s last minutes, they sit together, at the dining table in Chuck and Wendy’s house, uneasy at first but with growing comfort, talking about how they’ll get back at the people who’ve wronged them. The scene is almost unbearably domestic, these two fallen gods and the woman who binds them, sipping wine like a trio of yoga moms, carping about being done wrong at work, plotting revenge against people who no longer think about them at all. This is what excites me most about whatever’s coming next: when we leave them, Chuck and Axe have been reduced to bit players, sidelined in their own stories, the only unacceptable place to be. What sort of monstrous schemes will be required for them to claw their way back to where the action is? “I’ve got some ideas floating around,” Chuck says, when Axe asks him if he knows how he’ll go after Jock. And Axe taking down Taylor? “Yeah,” Axe says, leaning forward in his chair. “I’ve got a plan that’s starting to form.”