Home Culture How Fila Snuck Back Into Favor | 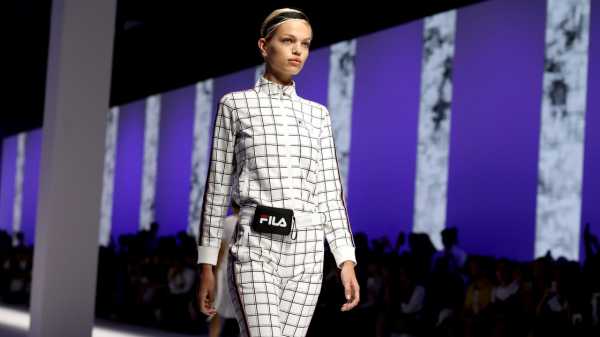 Last month, the Italian sportswear brand Fila staged its very first runway show for Milan Fashion Week. Antonino Ingrasciotta and Joseph Graesel, the brand’s creative directors, delivered a very safe collection. There were hints of Fila’s nineteen-seventies tennis heritage—polos with napkin-sized collars—alongside billowy suits paired with sneakers. It was a show given by a label that is cashing in on recently built-up capital in the vintage market. Fashion folks continue to dig through their closets for old sportswear, and Fila, which first underwent a revival in niche communities, is now trying to see how far its image can stretch.

At the last Milan Fashion Week, Fila made an appearance when the Instagram artist Hey Reilly repurposed its distinctive font in a “tongue-in-cheek” collaboration with Fendi. In 2015, Fila’s London team approached the Russian designer Gosha Rubchinskiy, who is known for his high-end spin on post-Soviet youth attire. Rubchinskiy produced a hoodie with a giant Fila logo and a muted-gray revisions of the company’s original tennis shoe and its low-top T-1 sneakers. The collaboration marked Fila’s return to the fashion mainstream after more than a decade of irrelevance. Fila wasn’t the first nineties brand to stage a runway revival or bring in a high-profile creative partner—Calvin Klein and Reebok have similarly reintroduced themselves—but the company saw enough other brands find success to know that this is a potential path to renewed relevance.

For its first fifty years, Fila was content to make basic knitwear its primary focus. Then, in 1971, Fila hired the designer Pierluigi Rolando, who was tasked with getting the company into tennis apparel. The same year, Adidas had reached out to the tennis pro Stan Smith, the world’s top-ranked men’s player, about an all-leather shoe that would bear his name. His signature shoe remains popular nearly half a century later. Rolando débuted Fila’s famous split-“F” logo in a tennis collection in 1973. In 1975, Fila landed its own tennis star, the Swedish player Björn Borg, who sported the company’s logo on polo shirts and jackets, which soon were selling well enough to give the company a foothold in the burgeoning sportswear market.

Through the nineteen-eighties, the brand stuck mostly to tennis. Its tracksuit traded on the exclusivity of the tennis clubs that were then the brand’s core market. The tracksuit could be seen on up-and-coming rappers, such as LL Cool J, who, along with Run D.M.C. and their song “My Adidas,” helped nationalize the adoption of what were at the time still boutique clothing brands. “A lot of those were high-ticket priced and were never targeted to young urban males, but they adopted it to be a part of their culture,” Louis Colon III, the vice-president of heritage and trends at Fila, said. 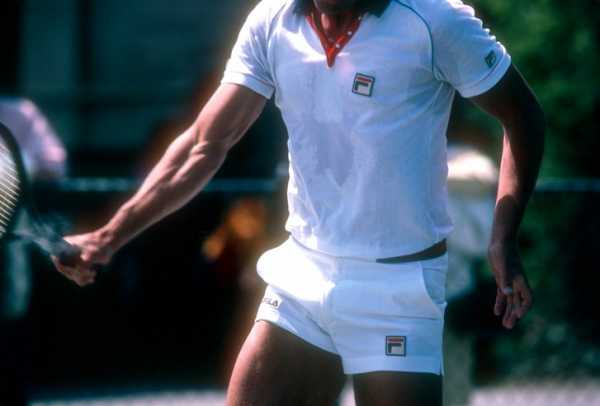 In the eighties, Fila crossed over from the tennis court to hip-hop.

Nike, still a relative upstart in the eighties, became a leading sneaker outfit when it signed Michael Jordan, in 1984. Companies scrambled to find their own M.J. In 1994, Fila placed its bet on the Duke University star Grant Hill, who signed a four-year deal with the company less than two months after he was drafted third over-all by the Detroit Pistons. The next year, GQ put him on its cover with the tagline “Can Grant Hill Save Sports?” The accompanying piece, by Tom Junod, touches on how the Fila had wooed him. “Grant would have exactly what he wanted: the chance to swing the course of Fila’s destiny the way Michael Jordan once had swung the course of Nike’s.” Though Hill’s shoes helped elevate Fila to No. 2 in basketball-shoe sales in 1996, just behind Nike, Hill suffered significant injuries throughout his career, limiting his star potential. The company never found someone to match Hill’s rookie hype. The turn of the millennium instead saw Nike continuing to assert its dominance by signing nearly every future star, from Kobe Bryant to LeBron James.

In 2003, Fila sold off a number of its assets. Fila U.S.A. was bought by a subsidiary of the private-equity firm Cerberus Capital Management, which in turn sold it to Fila Korea, in 2007. The brand was struggling to define its identity under constantly rotating ownership. For instance, it was during this period that Fila released the Helmsman sneaker, a knock-off of Prada’s America’s Cup silhouette, a style that had been endorsed by the forgotten rap wunderkind Hurricane Chris. The biggest get for Fila Korea’s C.E.O., Yoon-soo Yoon, was a million-dollar-a-year sponsorship deal with a post-“Simple Life” Paris Hilton.

By the late two thousands, Fila’s Italian roots and American second home were distant memories. Fila U.S.A. attempted a revival, in 2008, refreshing the White Line collection, and a Los Angeles Times write-up captured the brand’s overlooked place in the market: “When it comes to sportswear logos, Fila’s rounded ‘F’ is only slightly less iconic than Adidas' triple stripes and the Nike swoosh.” The piece treated the relaunch more as a boon for vintage collectors than as an exciting draw for new consumers.

Colon, Fila’s head of heritage, arrived at the company in 2010. By then, the niche demand for special-edition retro running and basketball shoes had become mainstream, with Nike again leading the way. “I went to the president of the company and said, ‘There is an opportunity here to address a very unique sneakerhead market with the Grant Hill,’ ” he told me. He pushed for an early revival of the shoe and saw demand outpace the company’s initial stock. This marked a shift in the brand strategy, and Fila began making a serious effort to better navigate its past and to use its history to speak to contemporary consumers. It was “maybe 2014 when I started noticing younger kids not being so caught up in caring about a handful of shoe brands that remain popular, like Nike,” Jordan Page, a Brooklyn-based vintage-fashion collector and stylist, told me. “They liked what they saw in other brands, and it allowed for them to be individuals.” In other words, Fila had become unfamiliar, and so it became new again.

Pawing through the racks of Deep Cover, a vintage shop in lower Manhattan, it isn’t too hard to come across a Grant Hill-era Fila T-shirt. “They apparently did something back then that people like more now,” Xen Griffey, the shop’s manager, said. “Now it’s like every other fashion kid on the street is wearing the big, chunky Fila.” The company has both contemporary trends and nineties nostalgia covered: logo-mania, athleisure, and, thanks to its spike-soled Disruptor II, the rave shoe. Fila didn’t necessarily inspire these trends, but it found itself perfectly positioned to take advantage of them. “Fila was like a fifth-tier brand,” Griffey told me. “It wasn’t Nike, it wasn’t Adidas, it wasn’t Reebok. You know what, And1 was cooler than Fila.”

Following the lead of the evergreen sweatshirt producer Champion, Fila partnered with Urban Outfitters, in 2015, on a capsule collection that showcased a few select pieces steeped in older Fila iconography. It also made its way into higher-end outlets: Saks Fifth Avenue picked it up for the first time this year. Though Fila sponsors tennis stars such as John Isner and Karolína Plíšková and has been reproducing old Grant Hill models, neither investment is the key to understanding the brand’s current renewal. The giant Fila “F” doesn’t conjure any specific memories for young consumers; the brand exists ever for the future.