Home Culture How Migrants New to Paris Express Themselves Through Style | 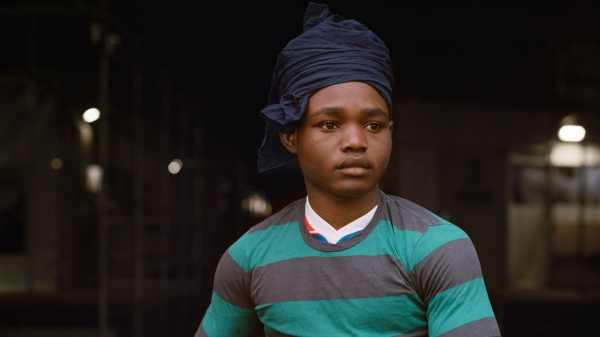 One night, in the winter of 2017, a young Afghan man named Zaman arrived at a reception center for migrants near the Porte de la Chapelle, on the outskirts of Paris, in the Eighteenth Arrondissement. Despite the cold weather, he was wearing Bermuda shorts and flip-flops. Zaman had travelled on foot and by bus from Kabul, more than four thousand miles away, to Paris, a gruelling journey that lasted sixteen months. He had lost most of his belongings along the way. In particular, he now needed new shoes. He made his way through the center, searching for a space that the volunteers had termed “the store”: a cavernous room packed with metal shelving and buckets full of donated clothes, where refugees could select new trousers, sweaters, and winter jackets. Staring at a jumble of sneakers packed in clear plastic containers, Zaman addressed a volunteer named Valerie Larrondot. Did the pile contain any “sneakers that weren’t ugly or dirty?” he asked, in French. “Sneakers like Jay-Z’s?”

This exchange was the starting point for “Sneakers Like Jay-Z,” a collaborative project that explores the meaning of clothing for newly arrived refugees. Larrondot recruited two French photographers, Ambroise Tézenas and Frédéric Delangle, to take portraits of young men wearing outfits that they’d selected at the store, which are presented along with interviews with the men, conducted by center volunteers, about the items they’d selected. The resulting series pairs pictures and interviews to create a portrait of how refugees see themselves, and how they wish to be seen.

Many of the subjects arrived in France with few personal possessions, after surviving dangerous journeys; some had only the clothes on their backs. Putting effort into their appearances, they said in the interviews, is a way to telegraph a sense of well-being to people they meet in France and to their loved ones back home. “If my friends saw me here, they’d say I’d taken back up my habit of dressing well, and they would be reassured,” Idriss, a twenty-year-old from Côte d’Ivoire, said. Amid the tumult of being in a new country, in a shelter, with no idea what the future would bring, a fresh outfit helped these men both to maintain ties to their home countries and to signal a fresh start. “Changing clothes, it’s like changing your life,” Ali, from Afghanistan, said. “You resemble a completely different person. You transform yourself.” Referring to the multi-pocketed jacket he’d chosen, Abdallah, a twenty-four-year-old Sudanese man, said, “I look more French with it, don’t I?” 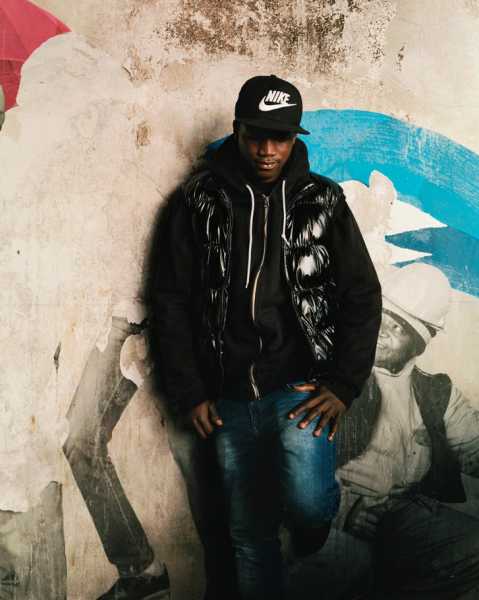 “My other clothes are what my friends have given me . . . I came here on Friday. I was on the street. I have nothing else than what I have on me.”—Ibrahim, age eighteen, Guinea. 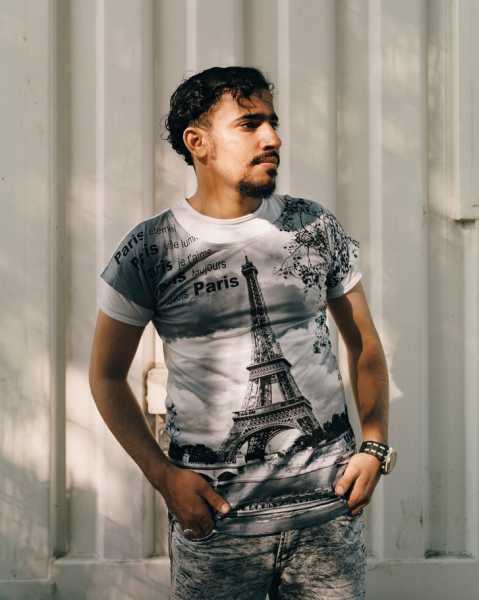 “I have always loved Paris, and I had already bought T-shirts with the Eiffel Tower on them, in Yemen, before even knowing that one day I would come try my luck in Paris . . . If my friends saw me, they would say, I think, that I look happy—even if I am happy and unhappy, both at the same time.”—Abdallah, age thirty, Yemen. 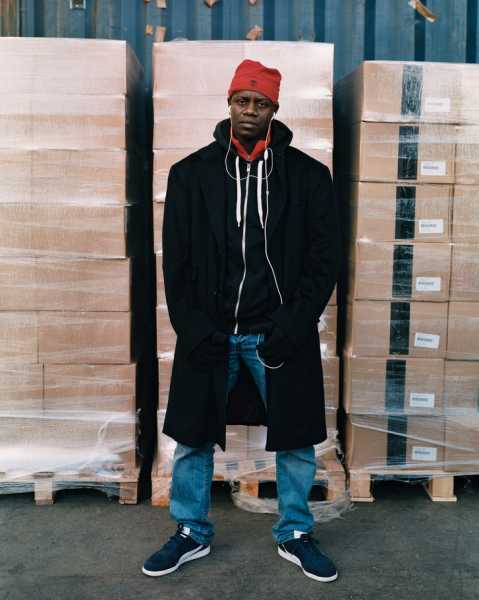 “Black goes with everything. And it also symbolizes my origins: I am African. I have black skin, and I like everything that is black . . . As a refugee, it is important to dress well. As an old saying goes, ‘It is better to make people like you than pity you.’ ”—Ibrahim, age twenty-three, Côte d’Ivoire. 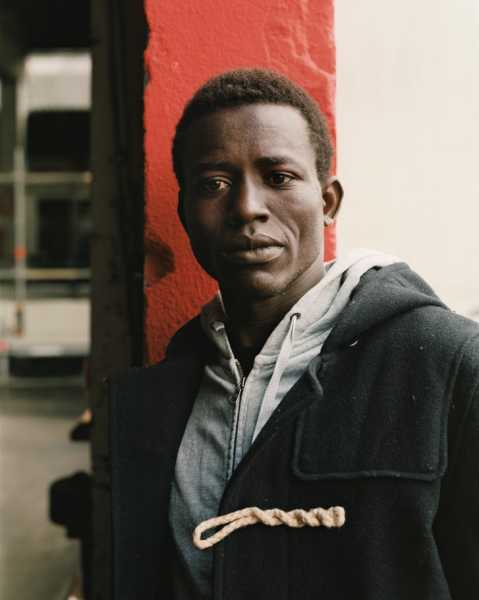 “This is how I like to dress myself; it’s really my style. If you had given me five thousand francs, I would have bought these clothes . . . With this coat, I feel on an equal footing. And I want to dress well to find some work or to study. When you go to someone else’s place, I think it’s normal to adapt to the way in which they live.”—Haroun, age twenty-four, Chad. 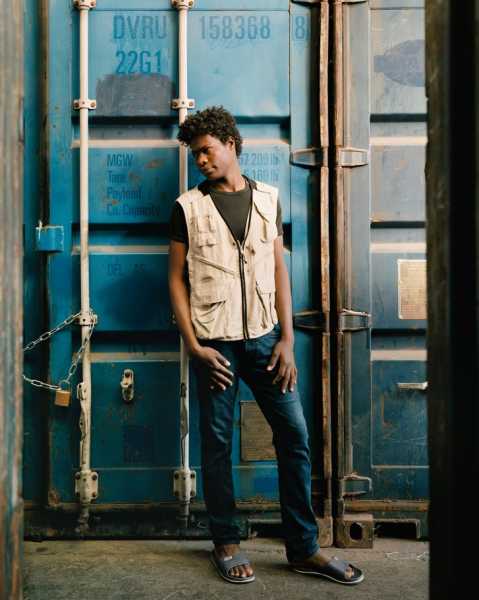 “I like this jacket with all the pockets. It’s not at all the kind of clothes I used to wear in Sudan. It’s weird to see myself like this. I look more French with it, don’t I?”—Abdallah, age twenty-four, Sudan. 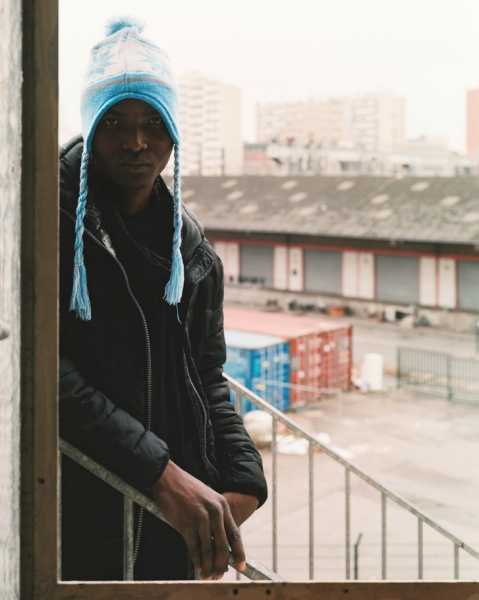 “I chose black clothes because I love dark colors, like black, blue, and red. The clothes look less dirty, and you stay well put. My favorite brand is Nike—it’s a brand everyone likes.”—Idriss, age twenty, Côte d’Ivoire. 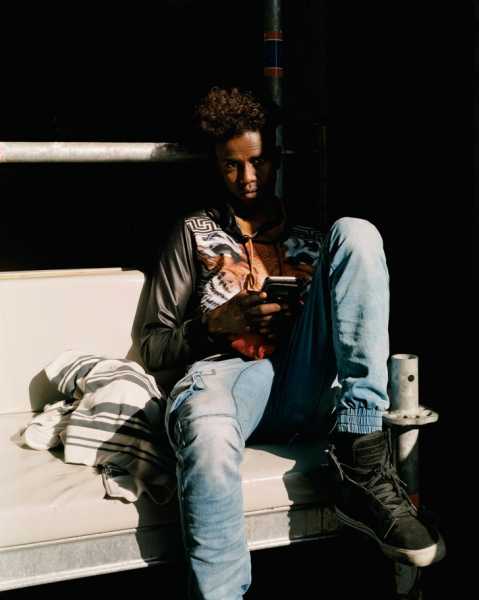 “In Somalia, we don’t wear such tight clothing . . . My family wouldn’t like to see me dressed like this. They would find it too close to my body. In France, I am free to dress how I like.”—Bachir, age twenty, Somalia. 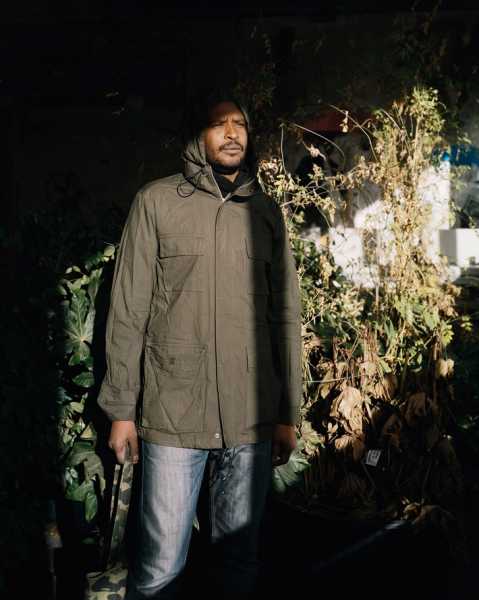 “I still have some clothes from Sudan, but now I also have French clothes. Half and half.”—Abbas Mohammed, age thirty-seven, Sudan. 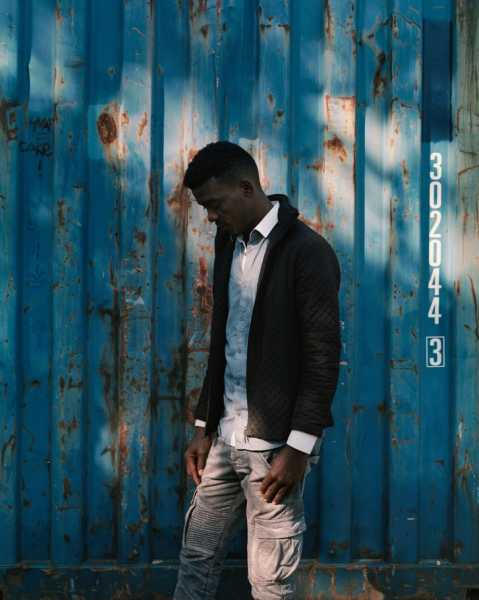 “I love this type of clothing. I think it’s a bit like what a big boss would wear . . . If my friends saw me like this today, they would be happy for me.”—Mohammed Hussein, age twenty-five, Sudan. 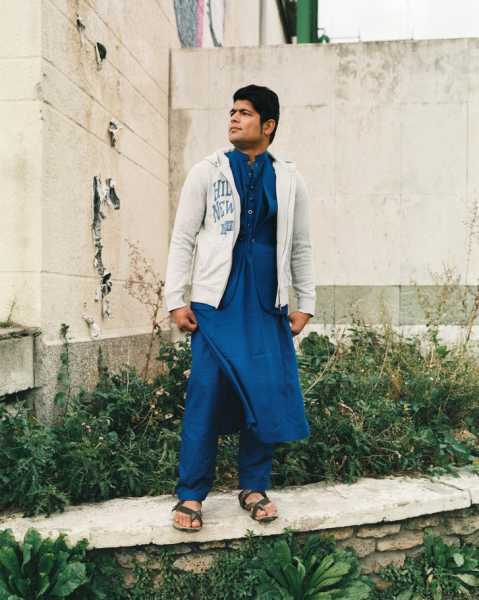 “I chose this jumper because it’s cold outside. It has a hood for protection. And it’s pretty, too. It matches my dress, you see. My dress comes from my country . . . I only have two outfits: my dress and my European jeans.”—Mohammed, age eighteen, Afghanistan. 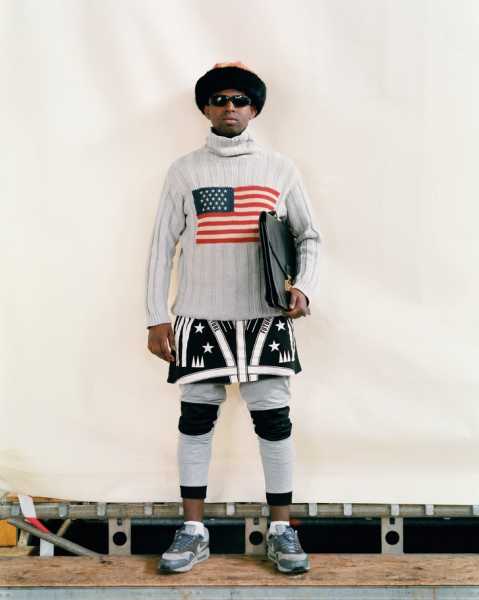 “I am dressed in an ushanka and a coat that I was given in Russia. I love this jumper and the hip-hop style. If I am asked how much I paid for it, I will say it was a present.”—Ahmed, age twenty-one, Somalia. 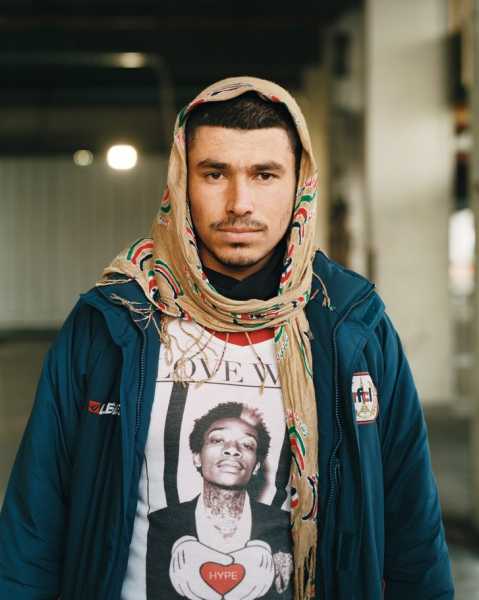 “I don’t know who the man on this T-shirt is, but I like his look. With the tattoo and the blond strand of hair. It’s great. I would like to get my hair done like that, too . . . I always do wear this Afghan scarf, because it’s my country. Look how we wear them in my country, we wear them like this.”—Safi, age twenty, Afghanistan. 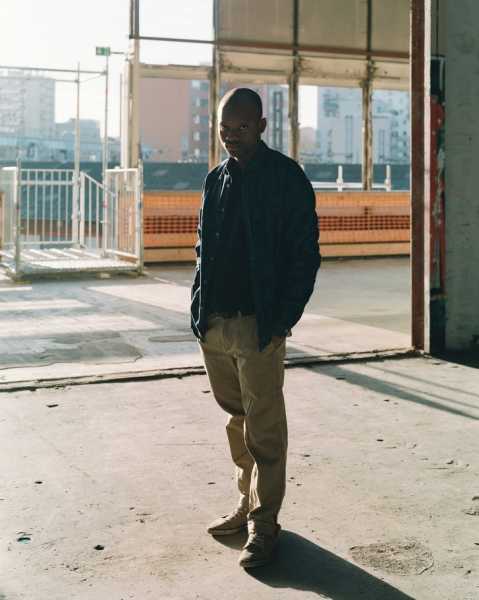 “The traditional fashion in Guinea is very colorful, with electric colors in the patterns. Shirts aren’t in our culture. There are tunics and sarouels. But the traditional fashion is more for the older people . . . Here, we want to live like everyone else. My idea is not to offend anyone. I came here to try and fit in. I don’t want any problems.”—Aboubacar, age twenty-one, Guinea. 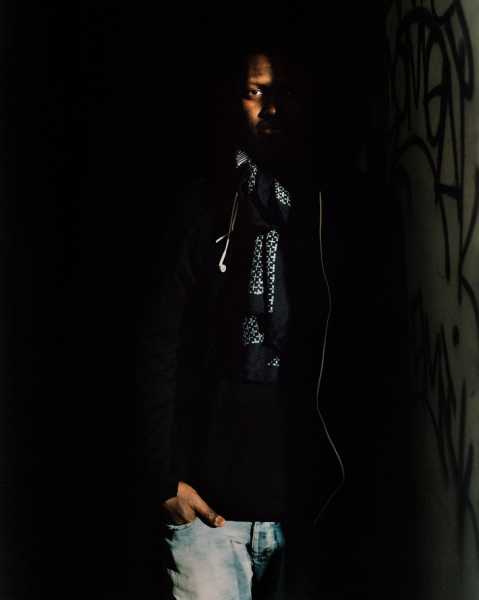 “I chose a black jumper in remembrance of my difficult journey. I experienced a shock when we were in the dark. Wearing black, it’s like I have won. A symbol of victory. Darkness, because we travelled in containers in Mali with the heat. We crossed the desert in trucks, frightened of weapons. This dark jumper, it’s positive.”—Ibrahim, age twenty-six, Guinea.

The Genial Voyeurism of the Japanese Reality Show “Terrace House” |

When is the World Cup third-place play-off at Russia 2018?