Home Culture How Much Longer Will MoviePass Last? | 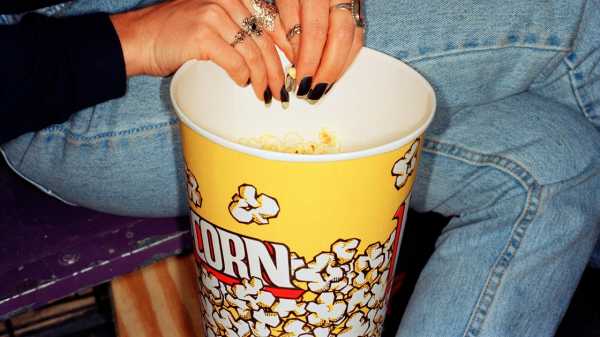 It is not difficult to rhapsodize about the oasis-like quality of the movie theatre, especially during high summer, and especially in a place like New York City. When relentless heat and humidity have transformed your neighbors into the crankiest and most pungent versions of themselves, and riding the subway feels like being jerkily ferried into Hades by a cackling Charon, the cinema beckons—so chilly, so dark, so gloriously quiet. There are snacks on offer, none of them responsibly sourced or even vaguely nutritious, and many of them weird: the candy—it comes in little boxes! The sodas—icy and enormous! Unless you’re a real wiseguy, you will mute and stow your phone as you sit down, thus forcing upon yourself the briefest hiatus from the hideous barrage of daily news. The whole ritual is so palliative, I’m surprised it’s not covered by health-insurance companies as preventive care, as essential to our psychic well-being as a good night’s rest. The movie theatre is maybe the only place left in America where no one can bother you. Until medically induced comas are approved for recreation, I cannot think of a more convenient or enjoyable way to disappear for two hours.

For as long as I can remember, I’ve been a go-to-the-movies-by-myself kind of gal. I appreciate the walk-and-chat dénouement that comes with bringing a bud or a date along—the spirited debate over a late-night plate of dim sum—but I have grown too accustomed to thinking of the movies as my own private sensory-deprivation tank to accommodate anyone else’s needs. So when a service called MoviePass began offering its subscribers one free movie ticket a day for (in most cases) just $9.95 a month—less than the price of a single ticket in New York City—I couldn’t scramble to my laptop fast enough. Part of me figured it had to be some sort of predatory scam—beware the proverbial free lunch—but the thought of seeing all those movies practically for free (if you went once a day for a month, then you’d be paying something like thirty-three cents for each ticket) was too intoxicating to resist.

When my MoviePass arrived in the mail, it looked like a regular old MasterCard. That afternoon, I timidly brandished it at my local theatre: “I have this . . . MoviePass?” I whispered. When the unstirred cashier handed me a ticket in return, I felt shock and then deep guilt—as if I were getting away with a minor crime. Who was footing my bill? Then, as it often does, that guilt turned into something else entirely.

Perhaps you are old enough to remember the Big Sweep at the end of each episode of the once-popular game show “Supermarket Sweep”? When contestants answered trivia questions to earn time on a giant clock, then used that time to plow through a grocery store like crazed animals, hurling frozen turkeys and jugs of laundry detergent into their carts, trying to spend as much money as possible before the buzzer went off. My early experience with MoviePass was not unlike the Big Sweep. Only, instead of frozen turkeys, I was seeing films that could very credibly be described as turkeys. Discernment was out the window! Is it a film? Is it playing in theatres? Two hours of climate-controlled solitude? I’ll see it.

I recall experiencing a similar version of this phenomenon—hysteria in the face of abundance— when file sharing first rose to prominence (but not yet to prosecution) and I discovered that I could log on to something called Napster and download as much music as I wanted, for free. I am perhaps not a person who metabolizes plenitude with grace. I filled hard drives and CD binders with pirated music as if my life depended on it. Yet my infinite library made me depressed, in the end. It was too much, and none of it seemed to matter, and I could no longer remember what I liked or wanted to hear, and eventually Napster collapsed, and the whole record industry collapsed, and maybe it was all my fault.

MoviePass, though, is different. So far, it seems only to make me like movies more: I have very contentedly beheld both ridiculous, big-budget pap (“Book Club,” “Skyscraper,” “Jurassic World: Fallen Kingdom”) and smaller, more contemplative films (“First Reformed,” “Eighth Grade,” “Won’t You Be My Neighbor?”). The lack of financial stakes means I’m more likely to watch things that fall out of my typical purview, which can sometimes be edifying, like watching the news on a different channel. But I suspect that I’m mostly grateful to have a private, distracting place to go and unplug from the furious anxiety of being alive in 2018. I collapse into my seat as if it were a massage chair. What a salve it’s been—having a safe and truly inexpensive way to instantly neutralize the turbulence of the day.

People who know things about money and profits have been concerned about the viability of MoviePass for a while now; last week, the company had to borrow five million dollars just to continue its operations. In April, MoviePass disclosed that it was losing around twenty million bucks a month. Yet Ted Farnsworth, the chief executive of Helios and Matheson Analytics, the company that owns ninety-two per cent of MoviePass (Verizon controls the rest), remained unnervingly confident: “I’m not worried about the viability of MoviePass at all,” he told the Times last spring. On Friday, users attempting to log in to the app and, most likely, go see the new “Mission: Impossible—Fallout,” were informed of an unexpected service interruption, supposedly the result of MoviePass not paying its bills on time—the equivalent of the electric company shutting off the lights. On Monday, after even more unexplained outages, it was announced that the monthly fee would soon be raised to $14.95, and that any film débuting on more than a thousand screens would likely be off limits for the first two weeks of its release. “This is a strategic move by the company to both limit cash burn and stay loyal to its mission to empower the smaller artistic film communities,” a press release promised. (I’ll admit this was the first I was hearing about any empowerment mission.) Data collected by National Research Group, a consulting firm, suggest that thirty-two per cent of MoviePass holders think the jig will soon be up—that no one rides for free. Will we look back on the halcyon days of the Pass and shake our heads at just how good we had it? “The more we try to explain such events in history reasonably, the more unreasonable and incomprehensible do they become to us,” Tolstoy suggests, in “War and Peace.” Let’s simply hang on while we can.

Taking Hydroxychloroquine is Personal Decision for Someone to Make – Trump

The Commercial Compromises (and Hygge Flourishes) of “Frozen” the Musical |