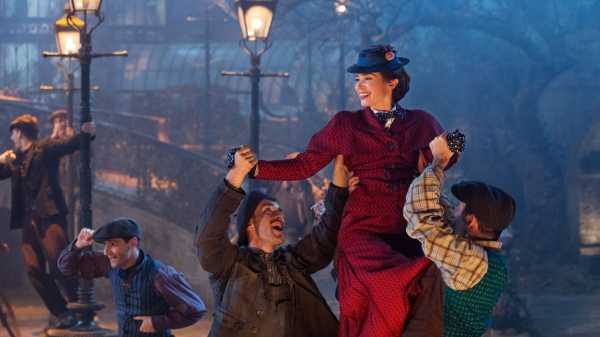 The director Rob Marshall has been working on the following problem for roughly two decades: How do you get modern audiences to dig movie musicals, a genre that laymen associate with Judy Garland, jazz hands, and the von Trapps? (All great things, by the way.) After working steadily as a Broadway choreographer and director, Marshall broke into movies with “Chicago” (2002), which won the Academy Award for Best Picture and helped revive movie musicals after three decades of neglect. His latest, Disney’s holiday extravaganza “Mary Poppins Returns” (which opens December 19th), has been nominated for four Golden Globes.

“When a musical doesn’t work—it’s such an embarrassing form—it doesn't work in a big way,” Marshall said after a screening earlier this month. He was sitting in a hotel lobby with a glass of orange juice, trying to fight off a cold. “Mary Poppins Returns” is set twenty-five years after the 1964 original; it’s now the Depression, and the Banks children, Michael (Ben Whishaw) and Jane (Emily Mortimer), are adults with adult problems. Cue the magically unaged Mary Poppins (Emily Blunt) to set things right. In both style and structure, the movie hews close to the original. Instead of Bert the chimney sweep, we get Jack the lamplighter (Lin-Manuel Miranda). Instead of a visit with the laughing Uncle Albert, there’s a trip to see the wacky Cousin Topsy (Meryl Streep). Instead of chalk drawings, the children jump into a cracked china bowl. For kites, substitute balloons.

The best of The New Yorker, in your in-box

Reporting, commentary, culture, and humor. Sign up for our newsletters now.

All this was “a very intentional choice,” Marshall said. “One of the main reasons is that the P. L. Travers books do that. They replicate the adventures, but in different ways.” Even more evocative than the plot parallels are stylistic touches that evoke the midcentury movie musical. The film begins with a full overture (“Nobody does that anymore,” Marshall noted) that plays out over paintings of London, some of them unfinished works by the late Disney landscape artist Peter Ellenshaw, which Marshall found in the Disney archives. Marc Shaiman and Scott Wittman’s original songs are tuneful homages to Richard and Robert Sherman’s 1964 score. Marshall said, “I didn’t want Mary Poppins to sing ‘Let It Go,’ you know what I’m saying?”

Adding to the nostalgia trip are a pair of nonagenarian legends. Angela Lansbury, whose mere presence brings back the era of “Bedknobs and Broomsticks,” materializes as a balloon lady. (Marshall choreographed her in the 1996 television special “Mrs. Santa Claus.”) And Dick Van Dyke, who in 1964 played not only Bert but also the ancient banker Mr. Dawes, Sr., makes an appearance as his son, Dawes, Jr.—a character whose age has now caught up to Van Dyke’s, and vice versa. His tap-dance on a desk is likely the happiest thing you will see in a movie all year. “If you watch it,” Marshall said, “Lin-Manuel is offering his hand as he gets up onto the desk, and of course he doesn’t even use it.” As for Julie Andrews, whom Marshall choreographed on Broadway in “Victor/Victoria,” the director first told her about the sequel at her Christmas party and asked if she’d like a part. Andrews, in Marshall’s telling, responded, “This is Emily’s movie. She needs to run with it. She doesn’t need me hanging around.”

The throwback style helps grease the movie-musical wheels, but Marshall was careful about how he segued into songs. “For Ben Whishaw’s first number, in the attic, I really had to find a very organic way to get into that, so you don’t feel like he’s starting to sing a song. So he opens a music box that starts to play a tune.” Transitioning out of numbers is also tricky. “At the end of Mary’s first number,” Marshall explained, “she snaps the bag shut. And that’s a percussive thing, and I go right to another percussive thing, which is throwing books down. It has a musicality to it.”

Marshall was four when the original “Mary Poppins” came out. Growing up in Pittsburgh, he adored “Oliver!” and “The Sound of Music”—this was the last gasp of the “event musical” era, before the studio system sputtered out, in the seventies. When the Pittsburgh Civic Light Opera announced a production of “The Sound of Music,” Marshall convinced his parents, both academics, to drive him and his two sisters to the auditions. They all got in. (His younger sister, Kathleen Marshall, herself became a Broadway choreographer and director.) He started dance lessons at sixteen and began his career on Broadway performing in “Zorba,” “The Rink,” and “Cats,” in which he played Munkustrap, the narrator cat.

“I was more of a dancer than most of the people who played that part,” Marshall recalled, “so the choreographer actually added all this new dancing for me. I think that might have led to the fact that I got a herniated disk.” After two months on his back, he was hired to choreograph a regional version of “The Rink” in Florida, which soon turned him into a full-time Broadway choreographer, working on shows such as “Kiss of the Spider Woman” and “Damn Yankees.” In 1998, he co-directed Sam Mendes’s Tony-winning revival of “Cabaret,” which brought fresh horror and grit to the Kander and Ebb classic.

By that point, Hollywood had all but given up on musicals. Sure, there were scattered successes in the seventies (“Cabaret,” “Grease”), eighties (“Annie,” “Little Shop of Horrors”), and nineties (“Evita” and a slew of Disney animated films). But modern audiences weren’t trained to accept characters breaking out into song unless they were cartoon crabs or Madonna. A pair of highly stylized films turned the tide: Baz Luhrmann’s “Moulin Rouge” (2001), which doubled down on postmodern disconnect by ramming pop songs into a period story, and Marshall’s “Chicago.”

Bob Fosse had wanted to direct a movie version of “Chicago” but died before he got the chance. Marshall got the job by pitching a strong concept: for every number, he would cut away to a fantasy vaudeville world, in which the jailbird Roxie Hart (Renée Zellweger) would reimagine her life in song. “I remember people saying, ‘Yeah, but then it’s going to seem stagy,’ ” he said. “And I said, ‘I will tell you right now, the best musical numbers I’ve ever seen in movie musicals are on a stage. Every Fred Astaire musical. Same with Gene Kelly, same with Judy Garland.’ ”

Marshall used a similar device in “Nine” (2009), starring Daniel Day-Lewis as a singing version of Federico Fellini’s movie-director alter ego from “8 ½.” The film bombed. “No one really saw it,” Marshall said. “It kind of just disappeared.” Like “Chicago,” it was produced by Harvey Weinstein, of whom Marshall says now, “The side of him that was revealed I was completely unaware of. I mean, it’s so horrific.” But he also believes that the Weinstein Company failed to market the film properly—it was a trickier sell than “Chicago” and should have started in festivals and smaller venues. Also, he says, “I did feel somewhat compromised working on it. Everything on the screen wasn’t fully my perfect version of it.” (Anthony Lane wrote, in his New Yorker review, “The entire theme of Marshall’s film is set by and surpassed by Fellini’s opening scene.”)

In the meanwhile, Hollywood started churning out big-budget musicals at a pace it had not touched in half a century. Many even won awards. Films like “Dreamgirls,” “Les Misérables,” “Mamma Mia!,” “Sweeney Todd,” and “La La Land” reacquainted audiences with the genre, helped along by television (“Glee,” “Crazy Ex-Girlfriend”) and a new batch of Broadway hits (“The Book of Mormon,” “Hamilton”). Marshall, with his creative partner John DeLuca, now has a production deal with Disney, for which he directed the thorny Stephen Sondheim musical “Into the Woods” (2014) and is in the “exploratory phase” of a live-action remake of “The Little Mermaid.” “I never believed the genre was dead,” he said. “I just felt it was how you approach it.”

As we spoke, a little blond boy approached Marshall. At the screening that afternoon, he had asked if the guy who plays Admiral Boom—the Navy man who shoots cannons from the rooftop—is the same actor as in the first movie. (The original Admiral Boom, Reginald Owen, has been dead for forty-six years; the role now belongs to David Warner.) “I loved your question,” Marshall told him, amused that he had managed to conflate half a century of time.

“I sometimes make movies on iMovie,” the boy told him. “Anyways, bye.”

Who said it: Jose Mourinho or Donald Trump?

Qualcomm raises bid for NXP to about $43.22B

Remaining Permits for Nord Stream 2 May Be Issued in Summer...