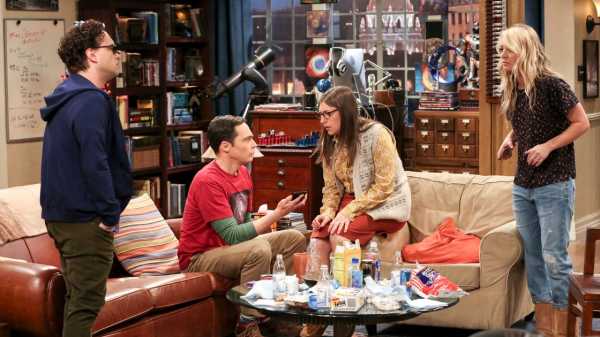 In 2014, when Jim Parsons won a fourth Emmy for his role as the physicist Dr. Sheldon Cooper on “The Big Bang Theory,” he turned to his boyfriend and seemed to mouth, “Oh, my God.” Despite the sustained success of the show—the CBS sitcom about nerdy scientists working at Caltech would eventually challenge “Sunday Night Football” for the most watched regularly scheduled program in prime time—apparently, Parsons remained shocked at what he has referred to as his unbelievable “good fortune.” Onstage, waiting with the award for Parsons, stood Julia Louis-Dreyfus. In the audience, a fellow-nominee, Matt LeBlanc, clapped politely. Both LeBlanc and Louis-Dreyfus starred in critically acclaimed shows that year (“Episodes” and “Veep,” respectively). Both were single-camera comedies in the fourth-wall-breaking style that had become pervasive since the American version of “The Office” premièred, in 2005. And both actors had been on the top sitcoms of the nineties—LeBlanc on “Friends” and Louis-Dreyfus on “Seinfeld”—which were multi-camera shows with live audiences, just like “The Big Bang Theory.” LeBlanc and Louis-Dreyfus had dutifully adjusted to the new modes of television. And yet here was Parsons, gawky in a bow tie and dark-burgundy tuxedo, being honored for his work in a show very much like the ones that they had starred in two decades earlier. “There’s no accounting for taste,” Parsons said, accepting his award.

Still, throughout the twelve seasons of “The Big Bang Theory,” critics have attempted to account for that taste. One Vulture article even posited—in the systems-and-numbers-loving spirit of the show—that its writers had achieved an ideal rate of jokes per minute. The pilot that CBS picked up, co-created by Chuck Lorre, presented an unlikely scenario: four scientists, prone to esoteric talk of Schrödinger’s cat, string theory, and gravitational waves, would befriend an aspiring actress, named Penny (Kaley Cuoco), who lives across the hall and who, from her perspective as a “normal person,” would teach the geeks about ordinary human interaction. The breakout character was Sheldon, whose mixture of nerd arrogance (“They were threatened by my intelligence and too stupid to know that’s why they hated me,” he complains to his mother in one episode) and nerd incomprehension provided much of the show’s humor.

What seemed to vex critics almost immediately was how “The Big Bang Theory” only skimmed the surface of nerd life, and relied upon well-trodden sitcom forms for laughs. “We are going to show you girls how cool a job in science can be,” Sheldon’s roommate Leonard (the “Roseanne” alum Johnny Galecki) tells a classroom full of middle schoolers. “How cool, you ask? Well, how about negative two hundred and seventy-three degrees, because that’s the temperature at which entropy reaches its minimum value.” The girls’ dismayed faces, reacting to Leonard’s corny delivery, are the punch line.

Many viewers were also repelled by the sexist commentary from Sheldon that couldn’t really be saved by his strained elocution and left-field historical factoids. “All you hear women say is, ‘I’ll just have a salad.’ ‘Where’s my lip gloss.’ ‘I think this element should be called radium.’—That last one was Madame Curie,” Sheldon says, of the nineteenth-century Nobel laureate, before adding, “She was kind of an honorary man. She had a penis made of science.” Surprisingly, the show has long maintained a sizable female audience. “Does the show still need work when it comes to gender or geek culture or STEM worker portrayals?,” A. K. Whitney wrote for Bitch, in 2014, “Sure. But it remains one of the more realistic ones on television.” It seems that hostile men like Sheldon were familiar to women who managed to get work done in offices and labs in spite of them. Moreover, the sitcom didn’t really take off until the fourth season, when CBS enlarged the roles of two female scientists, a saccharine microbiologist, Bernadette Rostenkowski (Melissa Rauch), and a sexually repressed neurobiologist, Amy Farrah Fowler (Mayim Bialik). With an even gender balance and a larger ensemble, the show’s success becomes less of a mystery: it came to resemble “Friends.”

Reading “Generation Friends,” Saul Austerlitz’s under-the-hood chronicle of the nineties sitcom, one sees patterns between the two shows emerge: a scientist falls in love with an ambitious and beautiful young woman; a lot of stage traffic takes place in a hallway between two apartments; there’s a very important couch. Both shows also faced jeers for their apparent lack of realism. (“Friends” because its New York yuppies seemed to live in an alternate dimension: middle-class Monica’s spacious apartment in the expensive West Village; a downtown Manhattan with little to no black people in it.) Most telling, both shows reflected and amplified a societal shift that was entering the mainstream. “Friends” thrived at a time when coffee shops, once the haven of leisurely boho sophisticates, were being spread to strip malls by titans like Starbucks. In between sips of coffee, the show captured a new life style of a generation who had put off marriage and children in their early twenties, and replaced many of the roles traditionally filled by family with friendship. Likewise, “The Big Bang Theory” introduced concepts from tech and nerd circles as that culture grew from a curiosity to a vexation to an inescapable substrate of American life.

Austerlitz’s history reveals how “Friends” combined its older creators’ reminiscences with the newer, Zeitgeisty cultural interests of younger audiences. Marta Kauffman and David Crane, the middle-aged creators of “Friends,” used memories of their actual friends and lovers, who gathered around Kauffman’s Bleecker Street apartment (the show was almost called “Bleecker Street”), to sketch the world of their twenties. Austerlitz reports that Crane even smuggled his experience as a queer man living in eighties New York onto prime time through gags involving the mistaken-for-gay office drone Chandler Bing. At the same time, Kauffman plied her children’s babysitters for more nineties specifics on what the youth were up to.

“The Big Bang Theory,” a decade later, had a similar genesis. To make the show, Lorre partnered with an old collaborator, the producer Bill Prady, who had dropped out of college, taught himself how to code in the early eighties, and got a job as a computer programmer. Sheldon Cooper emerged from a mashup of a co-worker who grew paralyzed at restaurants weighing the variables of service into the tip for the waiter, and Prady’s father-in-law, a pediatric rheumatologist who thought Prady’s wife’s menstrual cycle made for appropriate dinner-table conversation. An astrophysicist named Rajesh Koothrappali, played by Kunal Nayyar, spends the first half-dozen seasons literally unable to speak to women; a computer programmer Prady used to know turned mute whenever a woman walked into the room. The younger members of “The Big Bang Theory” ’s writing staff then stirred in elements of their own lives, pulled things from news stories and YouTube channels, consulted actual scientists, and even mined fan fiction about their show.

Of course, many sitcoms combine nostalgia and the ephemera of present-tense culture in this way. “How I Met Your Mother,” “Broad City,” and “30 Rock” drew on their creators’ more youthful exploits but were littered with contemporary references. Others, like “Fresh Off the Boat,” “That ’70s Show,” and “Happy Days,” are set roughly twenty years before their air dates and deeply refracted through the concerns of the present. These comedies create an uncanny valley through which multiple generations can wander. “The Big Bang Theory,” with its particularly wide, thirty-year gulf, appears to pull in people old enough to remember what the misfits who tinkered with motherboards were like in the eighties, before everyone had an iPhone charging on the nightstand. (These are the same people who also have trouble setting up their smart TVs to play Netflix.) The numbers bear this out. The average age of people who watch television on television is already pretty advanced, but the median “Big Bang Theory” viewer, at fifty-six, is up there. It makes sense that a generation of people grappling with the intricacies of Twitter (“The Big Bang Theory” characters were early adopters), Fortnite, fake news on Facebook, and Elon Musk might find outmoded archetypes of nerdiness easier to digest. Frequent references to more familiar cultural touchstones, like Batman, Leonard Nimoy, and Bill Gates, help, too.

On Thursday night, “The Big Bang Theory” closed out its run with an audience of eighteen million viewers. Despite all the cast changes, Sheldon remained emphatically misanthropic, self-centered, and alienated. In the end, the reason he became a kind of dweeby Fonz has to do with the structural tendencies of the oft-dismissed multi-camera sitcom. Such shows extract empathy in real time. With a live audience, silence is not an option: if a joke or a scene doesn’t land, if the real people aren’t feeling it, then the writers storm the soundstage and change it. Alienated characters, who are the least likely to garner empathy, require extra attention from writers, and therefore often gravitate toward the center of a show. As a result, the viewers come halfway, too. It’s unlikely that a curmudgeonly Archie Bunker on “All in the Family” or an uptight Alex P. Keaton on “Family Ties” will remain detestable for long, even if their creators did set them up to be antagonists. Eventually, audiences saw that Sheldon was as befuddled by the world as they were uncomprehending of his intellectual pursuits. They also learned that he hated change as much as they did. In this way, an outmoded form of television cushioned the anxiety of the brave new tech culture for a generation.