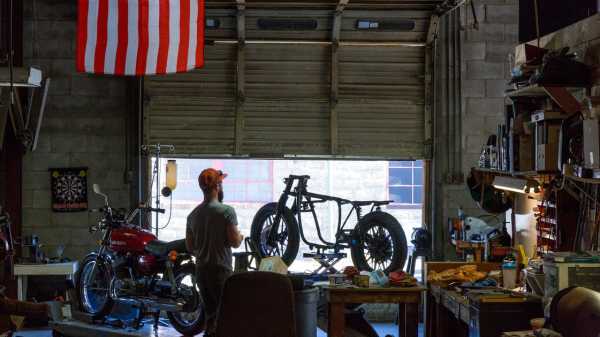 In Philadelphia, where I live, a menace has invaded city streets. A number of new town houses, clad in nostalgic, deferential brick, have put at their bases a yawning portal: the garage, an offensive import from the suburbs. Parking in a dense city is always a testy, teeth-grinding experience. But the street-facing garage turns it into something like a crawl through endless desert, each oasis of space a mirage that evaporates as a shutter comes into view. Some of the developments have tried to remedy this problem by creating new streets altogether, perpendicular alleyways that face the garages and are sometimes segregated behind a gate. These succeed only in diminishing the street life of the city.

No one truly needs a domestic garage to park a car; space is available, if not readily, on city streets. So why do they exist? The reason may have nothing to do with parking. In their recent book “Garage,” Olivia Erlanger, an artist, and Luis Ortega Govela, an architect, coin a term, “garageification,” which describes a strange excrescence, initially unrelated to the central functions of the home, acquiring a life of its own and beginning to blend previously separate realms. Garages were, of course, designed to house cars. But they soon became much more: storage spaces, offices, man caves. Entire companies were concocted in garages, and several styles of music were named after it. The authors of “Garage” locate themselves in the tradition of the German critic Walter Benjamin, who speculated for more than a thousand pages on Paris shopping arcades as emblems of the nineteenth century. For Erlanger and Ortega Govela, who speculate with more brevity, the garage is a latter-day arcade, a symbol of modernity—or maybe postmodernity.

The extravagance and curiosity of the early American garage was symbolized, the landscape historian J. B. Jackson noted, in the borrowing of what was obviously a French word for an American phenomenon. Modelled after stables and coach houses, garages were initially detached, for sanitation reasons, from the main home, and could be constructed in the fancy styles of the day; a 1906 House Beautiful issue laid out Colonial, Tudor, and Craftsman garages. Often, a second story housed the chauffeur (another French borrowing). But many house designs took pains to hide the garage at the end of a long driveway, or behind a wall. Around the time of the First World War, American cities began to have more prosaic garages, lined up along service alleys, often ransacking the space back yards once occupied.

The true revolution took place when the garage became an essential part of the house, attached and connected by a door. This made it all but another room. Erlanger and Ortega Govela, looking for the origin of the contemporary garage, find it in an unexpected place: Frank Lloyd Wright’s Robie House, one of the architect’s original Prairie-style homes, which was completed in 1910 and is still standing, on the South Side of Chicago. Frederick Robie was an entrepreneur, the son of a bicycle manufacturer; his wife, Lora, had come across Wright’s work in House Beautiful and insisted that the two meet, with the hopes that Wright might design their new home. They shared an enthusiasm for new technology: Wright was an early adopter of the automobile—when he went to meet Robie, he drove his custom-built yellow Stoddard-Dayton, a low-slung motorized canoe with tall wheels and cartoonishly eyelike headlamps—while Robie wanted his father to turn to car manufacturing. For Robie’s house, Wright did away with the habitual front porch and stable, and instead placed, right up front, what may be the world’s first attached three-car garage. The house announces its integration of the automobile. Erlanger and Ortega Govela note that Wright also eliminated much of the closet space from the house, foreshadowing the eventual move of most storage into the garage, “the American consumer’s preferred landfill.” For Erlanger and Ortega Govela, Wright’s garage was ahead of its time, an autonomous object, freighted with ideological momentum, that paved the way for the reshaping of cities around cars and the expansion of the suburbs. This theory counters more common forms of historical explanation—federal subsidies in the form of highways and suburban housing, for example—but captures something of the monstrous, devouring nature of the American garage.

Just as basements became game rooms, garages, too, became multipurpose. After the Second World War, public transit declined, tracts began to sprawl, and households felt the need to acquire more cars; but home-delivery services also decreased, which meant that houses had to have a washer and dryer and freezer, and an easy way to ferry increasingly larger loads of groceries. Human beings, not designers, changed the meaning of the garage. “Once home and work are garageified there is an erosion between the domestic and productive spheres, where the dichotomy, language, and aesthetic of home and work borrow from one another,” Erlanger and Ortega Govela write, with academic portentousness. The garage was transformed into a place for storing old bicycles, family albums, and one’s bulkier board games. It was also foundational to the mythos of Silicon Valley, a retreat for nerds like William Hewlett and David Packard to develop the audio oscillators that gave amplitude to Walt Disney’s “Fantasia.” (The HP Garage is now a private museum in Palo Alto.) Garages, which once stored the vehicle that took you between work and home, became workspaces that one had at home, if not quite in the home.

“Garage” aggressively meanders, in the lurching, free-associative style of cultural studies, from the Robie House to the myth of Steve Jobs and Steve Wozniak, both of them alums of Hewlett-Packard, concocting the first Apple computer in a garage. (Wozniak disputes this story, sourcing most of the original work to his apartment and Jobs’s bedroom.) Garage rock, and Gwen Stefani and No Doubt rehearsing in a garage, are also name-checked, as is the garage as gym, where the last rites of American masculinity are conducted in sweaty privacy. “The garage without a car lost its prescribed use and became a deprogrammed room, a raw residential space that could be easily appropriated for a new set of codes and behaviors that weren’t particularly domestic,” Erlanger and Ortega Govela write. In a move at once strange and predictable, they conceive of the Internet as essentially a giant garage. “The garage was a technology that displaced the home and its subjects,” they write. “Now domesticity is being reformatted once again through technologies that detach the home from the house.” Suggestive as the comparison is, they miss the opportunity to comment on the Internet’s general atmosphere of garage-ness, with its dank memes and moldy conspiracies.

For Erlanger and Ortega Govela, the garage is an emblem of suburban privatization. But the future of the space may well be in cities, where the number of cars has far exceeded population growth. As the transportation consultant Bruce Schaller noted in a recent article, the growth in urban households that are “car-free” is being outpaced by those that are “car-light” (owning one car) or “car-rich” (owning two or more). Many of these households are in cities where public-transportation options exist alongside the heavy use of “ride-share” services like Uber and Lyft, which seem to have contributed to the rising number of cars. “From mid-2000 to 2012, transit ridership increased while car ownership grew slowly, if at all,” Schaller writes. “But now car ownership is expanding faster than population. Add in ride-hailing services, and the glut of motor vehicles makes it more difficult to give buses, bikes, and now e-scooters the road space they need to be speedy, safe, and comfortable.” Rather than becoming less dependent on cars, cities have become filled with them. And, just as privatized forms of transportation have ballooned, so might private forms of parking. A civilization that has grown up with garages will not, it seems, dispense with them easily.