Home Culture How the Left Won the War for Gritty | 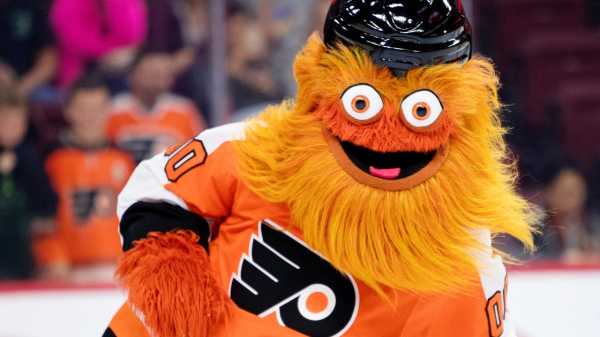 Gritty, the new mascot of the Philadelphia Flyers hockey team, has had a busy few weeks. After he was introduced to the world, on September 24th, with the backstory that he had been living in the team’s home arena and subsisting on hot dogs, Gritty was met with the kind of weary disdain that accompanies a storied franchise trying to boost its “fan engagement” by sending a lame Muppet knockoff into the stands. Then, that night, during a Flyers preseason game, Gritty, armed with a T-shirt cannon, went out and slipped on the ice, making a merry fool of himself and drawing more ridicule.

Yet, like any savvy aspiring celebrity, Gritty leaned hard into the skid. He started tweeting, beefed with a fellow-mascot, and got himself booked on the “Tonight Show.” Rather quickly, cool-kid Internet sentiment coalesced in Gritty’s favor: he wasn’t a terrible corporate misfire but was, perhaps in part because of all his obvious flaws, entirely great. Suddenly, the mark of a knowing user on Twitter was to declare Gritty not just a good sports mascot but the latest version of the best thing ever.

As a mascot, Gritty is indeed good. He has a classic, Phillie Phanatic-inspired silhouette, with a big gut that he can rub and swing around for comedic effect. His orange fur pokes out of his uniform at the wrists and ankles in a funny way. But it’s the head and face that really matter: the pink, frozen Joker smile; the wicked underbite; the dopey tongue; the shaggy beard; the hockey helmet squeezed atop his mess of hair. And then there’s the key to the whole look, which makes him less menacing than pitiable and endearing: the googly eyes, which spin off in different directions when he moves. All in all, it’s a winning combination of freakish and sweet. This week, when he joined a group of junior-league hockey players on a parade float, raising his arms over his head as if on a joyride, he looked like the friendliest possible incarnation of drunken Philadelphia sports fandom—and it was easy to see the appeal of the growing cult of Gritty. “Me & a few of my fav Gritizens,” he tweeted, describing the picture.

But Gritty is not for everyone. Or, that is, Gritty, despite the Flyers’ wide-net marketing blitz, does not belong to everyone. As the mascot was gaining fame, he was quickly seized by the left as a symbol of progressive politics and resistance to Trumpism. In the early days of Grittymania, the socialist magazine Jacobin tweeted, “Gritty is a worker,” and the designation stuck. On October 1st, when the President was in Philadelphia to address a meeting of the National Electrical Contractors Association, several protesters held anti-Trump signs and banners featuring Gritty, yielding images that went viral. One showed an extra-crazed Gritty biting the arms off of Trump; another featured Gritty waving an Antifa flag, with the words, “GRITTY SAY ‘G.T.F.O. OF PHILLY!’ ”

Gritty does look a bit like an addled version of Karl Marx, or a deranged Fidel Castro—and his mad eyes make him appear capable of mass-action mayhem—but there is, of course, nothing especially progressive, socialist, or anti-fascist about him. In fact, it’s just as easy to imagine it having gone the other way, with Gritty appropriated as a bright-orange avatar of MAGA pride, an unshaven deplorable come to squirrelly, plushy life. With his gleeful, dumb stare, Gritty was like some overgrown, empty humanoid vessel, waiting to be instilled with knowledge of this world, an unformed mind up for grabs. The race was on to make him woke before he got red-pilled.

We might, as the columnist Jillian Kay Melchior wrote recently in the Wall Street Journal, lament the politicization of Gritty, and wish that he could belong, as she says, “to Philadelphia, not to far-left activists.” But to believe in this possibility is to overlook how everything, in this moment, is political—and that saying otherwise, and arguing for the continued utility of unifying, supposedly apolitical symbols, is itself an expression of politics. In the culture war, skirmishes are fought on every field. To fail to plant one’s flag upon some new ground, or, in this case, orange fur, is to lose it to the other side forever. It’s more fun to love Gritty than to hate him, and, recognizing this, the left grabbed him before the right got the chance.