Home Culture How to Beat Trump, According to Experts on Middle-School Bullies | 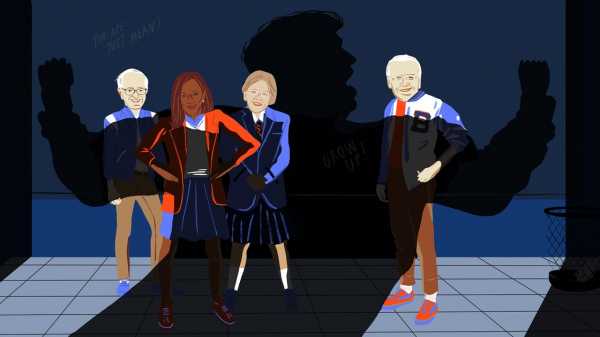 As the next Democratic debates approach, Joe Biden’s advisers are probably giving him a crash course on Spotify; Elizabeth Warren’s are likely polishing a zinger about being pregnant in the workplace. But the real contest looms, one in which the conventional politician’s tools—a firm grasp of policy, a poignant anecdote from the campaign trail—will be of little use. How, exactly, do you handle a competitor who recently called Mitt Romney a “pompous ‘ass’ ” on Twitter, and wrote, of Fox News, “Whoever their Pollster is, they suck”? President Trump’s attack lines ring more of the middle-school lunchroom than of the Presidential-debate stage. Perhaps the Democrats should start recruiting a different set of advisers.

To help the eventual candidate, I put in some calls to experts on middle-school bullies. Why middle school? It has to do with human social development. For most people, bullying peaks between the ages of twelve and fourteen—that tender period when hormones are surging and people aren’t always their best selves. “I had one student, a popular seventh grader, who would physically recoil when another student sat down at the desk next to him,” Phyllis Fagell, a school counselor, therapist, and the author of “Middle School Matters,” recalled. “Like, he would go so far as to pick up his chair and scoot it over a couple of inches.” This seemed like a vicious case of public shaming. But, when she spoke to the popular boy, she discovered that he wasn’t even aware of the impact of his actions. “He said he was very sorry,” Fagell recalled. He wasn’t trying to shun his classmate. The kid was just uncool. “He perceived him as a social liability.”

The problem with middle schoolers is that they’re “incredibly insecure,” Fagell said. They’re becoming increasingly self-conscious. “They feel vulnerable, and they have no life experience, no perspective,” she said. Then there’s the setting. Unlike in the workplace—or even high school—middle school is a free-for-all, with no established social hierarchy. People are anxious about where they fit in. A scramble ensues. “There’s a lot of norm-building, a lot of cliquishness, a lot of jockeying for status,” Jaana Juvonen, a developmental psychologist at U.C.L.A., explained. “What’s created are dynamics where people want to side with the powerful.”

Bullies rise to the top because they’re able to demonstrate their power in clear, understandable ways. “Unfortunately, for young adolescents, one of the most concrete ways to show your power is to put other kids down,” Juvonen said. “To be mean, laugh at others. Typical Trump behaviors, I’m sorry to say.” What does Trump’s ascension to the Presidency say about the state of American grownup society? “It’s awful!” Juvonen, who gives presentations and workshops to public-school administrators and teachers, said. “I still keep going back to it: How could we have gotten here? What we’re seeing with Trump would happen in the very worst schools—the ones where things are totally out of control.”

Anyway. We’re here now. I asked the experts to picture an especially troubled middle school. The grownups are checked out, and an aggressive student named Donald rules the scene. Another student wants to challenge him. Her name is, let’s say, Elizabeth, the academic star. Or Kamala, the captain of the debate team. How should she go about it?

Barbara Coloroso, the author of “The Bully, the Bullied, and the Bystander,” said that the first thing to remember is “don’t get in the mud” with the bully. Don’t resort to name-calling, as Ted Cruz did in 2016. (After Trump had mocked his wife, Cruz called Trump a “big-government liberal” and “a sniveling coward.”) “That’s a huge mistake,” Coloroso said. “You can’t do that with a bully. He will be better at name-calling.” Trump had already labelled Cruz “Lyin’ Ted,” and called him “a soft, weak little baby.” “Trump tries to draw people into his bullying so he can identify it as a conflict,” she said. She speculated that this might be a risk for Harris: “She’s used to being in prosecutorial mode. She’s got to move out of that.”

When tangling with Trump, Juvonen said, the most important thing to know is “it’s less about content and more about power.” This goes double for the brainier candidates, like Warren, who might be tempted to pick apart Trump’s arguments. “We can’t worry about the intellectual arguments here, which is really sad,” she said. “First and foremost, you have to shift the power dynamics.” She went on, “One of the best strategies for kids who get bullied is to use self-deprecating humor.” This defuses the bully’s insults, and, potentially, helps the nerdy kid seem a tiny bit subversive. Plus, telling jokes could throw an antagonist off balance.“Bullies have very vulnerable egos,” she said. “What gets them angry the most is when someone makes fun of them.”

How should the candidates respond when Trump calls them by an offensive nickname, like “Crazy Bernie” or “Pocahontas”? Coloroso recommended calling out the behavior, but not the person. “You say, ‘That comment was bigoted, sexist’—whatever. Identify the behavior. Then say, ‘Those comments are beneath the office of the Presidency.’ ” Fagell agreed. “Let’s say there’s a group of kids on the playground, and one kid says something mean,” she said. “I might tell the child who was targeted to calmly say, ‘That was mean’ or ‘That was rude.’ Then you turn around and walk away. The person who made the comment is left standing there, with everyone looking at them. It exerts a very subtle form of social pressure.” Interesting—though it’s hard to imagine this working on a debate stage.

Some middle-school counselors are teaching their charges about power posing. “Make sure that your feet are planted firmly on the ground,” Fagell said. “That you are taking up space, making eye contact. Staying calm and unflappable. If you show weakness, you’re more likely to get targeted.” Positive self-talk is also big. “I had a girl once use mantras like ‘I deserve to take up space in the world,’ ” Fagell said. Coloroso suggested that Marco Rubio should have used that strategy in 2016, instead of turning to insults like “Donald is not going to make America great again. He’s going to make America orange.” “Rubio forgot the self-talk,” Coloroso said. “He should have said to himself, I’m a decent, caring human being. I don’t need to diminish him to feel powerful.”

“One of the people who’ve done it well is Pete Buttigieg,” Coloroso said. She cited Buttigieg’s criticisms of Mike Pence’s anti-L.G.B.T. policies, noting, “He doesn’t diminish the other person, but he calls him on the behavior.” She mentioned a comment that Buttigieg’s husband, Chasten, made on Twitter, after Pence had lunch with the Prime Minister of Ireland, who is gay. “I’ve sat at tables with people who would gladly deny me the right to marry, who openly support conversion therapy, and who adamantly believe being gay is a choice,” Chasten wrote. “Doesn’t mean they’re any less homophobic because we shared a meal.” Coloroso said, “When I saw that, I said, ‘Yes! He’s got it!’ ”

In the end, however, the experts warned that, to thoroughly dislodge a bully from the top of a social pecking order, you have to address the toxic forces that got him there in the first place. “You have to work on the culture as a whole,” Fagell said. Juvonen said that it’s about everyone else: the teachers who turned a blind eye to aggressive behavior, the kind students who were too timid to speak up, and the henchmen who egged the bully on, hoping that it would increase their own social status.

There are a number of strategies for dealing with dysfunctional middle-school cultures. According to Fagell, some counselors are appointing “kindness ambassadors”: identifying the more “pro-social” kids and giving them forms of “strategic empowerment.” (Perhaps this could be a new Cabinet position?) Fagell is a fan of an exercise that she calls a “values card sort.” Students are assembled in small groups and asked to sort a stack of index cards printed with words such as “responsibility,” “safety,” and “generosity.” The exercise helps them get in touch with their “core values,” she said, so they can be guided by those, instead of by the darker feelings that enable bullying: “anxiety, terror, envy, resentment.” Probably not feasible for the American electorate between now and 2020. But we can dream.