Home Culture How to Conduct an Open-Source Investigation, According to the Founder of Bellingcat... 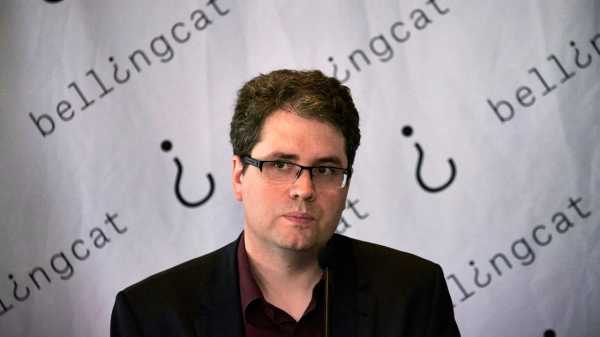 On a recent afternoon in central London, twelve people sat in a hotel conference room trying to figure out the exact latitude and longitude at which the actress Sharon Stone once posed for a photo in front of the Taj Mahal. Among them were two reporters, a human-rights lawyer, and researchers and analysts in the fields of international conflict, forensic science, online extremism, and computer security. They had each paid around twenty-four hundred dollars to join a five-day workshop led by Eliot Higgins, the founder of the open-source investigation Web site Bellingcat. Higgins had chosen this Sharon Stone photo because the photographer was standing on a raised terrace, which makes the angles confusing, and used a lens that makes Stone appear closer to the Taj than she actually was. The participants, working on laptops, compared the trees and paths visible in the photo to their correlates on Google Earth.

Stone’s location on that day—the northwest corner of the Great Gate—may not have been of grave historical importance, but the participants were employing the same techniques that have underlaid Bellingcat’s news-making investigations into subjects such as the downing of Malaysian Airlines Flight 17, over Ukraine, and the use of chemical weapons by the Syrian Army. When Higgins was profiled in The New Yorker, in 2013, he was still a lone blogger calling himself Brown Moses, and the field of open-source investigation—the microscopic examination of publicly available material such as satellite images, social-media posts, YouTube videos, and online databases to uncover the truth about disputed events—was in its infancy. Today, it is firmly established. Last year, the International Criminal Court issued, for the first time, an arrest warrant based solely on video evidence from social media, and the recent report on gas attacks in Syria by the Organization for the Prohibition of Chemical Weapons leans heavily on images from Google Earth that are annotated in a Bellingcat style. Meanwhile, open-source investigation reached a new audience this spring when the research agency Forensic Architecture, which has often collaborated with Bellingcat, was the subject of a show at London’s Institute of Contemporary Arts. (It has since been shortlisted for the Turner Prize.)

Higgins, who lives in Leicester with his wife and two young children, is now fielding ever more interest from journalists, N.G.O.s, corporations, universities, and government agencies, eager for his expertise. One of the participants in the London workshop I attended, Christoph Reuter, is the Beirut-based Middle East correspondent for Der Spiegel, and has worked as a reporter for three decades; when I asked him about Higgins, he made a gesture of worshipfully bowing down. Higgins started Bellingcat with a Kickstarter campaign, in 2014, but today almost half of its funding comes from these paid workshops, which he has been running since last spring, with the first in the U.S.—in Washington, D.C., New York, and San Francisco—planned for later this year. Higgins is also developing a partnership with the Human Rights Center at the University of California, Berkeley, School of Law, and hopes to hire enough staff to expand Bellingcat’s coverage into Latin America.

Higgins’s work is animated by his leftist, anti-authoritarian politics. One of the workshop attendees, a Middle East analyst named Robert, didn’t want his full name used in this article because certain factions in the region may see any association with Bellingcat as suspicious. But open-source investigation is a tool anybody can use; and as it spreads, it will inevitably mingle with the sort of delirium and propaganda that Higgins has always meant it to cut through. Crowdsourced Reddit investigations into Pizzagate or QAnon often appear, at first glance, not so different from a Bellingcat report, full of marked-up screenshots from Google Maps or Facebook. Even on the mainstream-liberal side, a new conspiracy culture sees anti-Trump Twitter celebrating any amateur detective who can find a suspicious detail about Jared Kushner in a PDF.

At the same time, the Russian government, which has derided Bellingcat’s open-source investigations in the past, now issues satellite images of bombings in Syria, inviting members of the public to look closely and see for themselves; and RT, the state-sponsored Russian news channel, has launched its own “digital verification” blog, seemingly modelled on Bellingcat. In ramping up both reporting and training, expanding Bellingcat into some combination of news magazine and academy, Higgins is working to, in his words, “formalize and structure a lot of the work we’ve been doing” at a moment when the methods he helped pioneer are more than ever threatened by distortion and misuse.

I asked Higgins whether he excludes anyone from these workshops. “We’re going to start explicitly saying that people from intelligence agencies aren’t allowed to apply,” he said. “They’re asking more and more. But we don’t really want to be training them, and it’s awkward for everybody in the room if there’s an M.I.5 person there.” I asked how he’d feel if a citizen journalist signed up with the intention of demonstrating that, say, many of the refugee children who apply for asylum in the U.S. are actually grizzled adult criminals. He said he’d let that person join. “If they want to use these techniques to do that reporting, and it’s an honest investigation, then the answers should be honest either way. They should find out they can’t prove their ideas. And maybe they’ll learn that their ideas aren’t as solid as they thought.” Ultimately, Higgins respects good detective work, no matter where it comes from. At one point in the workshop, he showed the group a video about 4chan users taking only thirty-seven hours to find and steal a flag emblazoned with “HE WILL NOT DIVIDE US,” which Shia LaBeouf had erected in front of an Internet-connected camera in a secret location as a political art project. “4chan is terrible,” Higgins said. “But sometimes they do really amazing open-source investigations just to annoy people.”

After Sharon Stone, there were several more geolocation exercises, concluding, on Day Two, with a joint effort to piece together several dozen photos of the M2 Hospital, in Aleppo, after it was bombed by pro-government forces. The challenge was to use tiny details to figure out exactly how they connected together in three-dimensional space: to determine, for instance, whether two photos that showed very similar-looking chain-link barriers were actually of the same chain-link barrier from different angles. “Most of my pictures are of rubble, which is super-helpful,” Diane Cooke, a Ph.D. student at King’s College London’s Centre for Science and Security Studies, said.

Higgins mentioned that he had left out all the gory photos, but nevertheless this exercise was a war crime turned into a jigsaw puzzle. Earlier, he had paused a video projection on a frame of a nerve-gassed Syrian child’s constricted pupil, which stared down at us for an uncomfortably long time. “I am careful about that,” he told me, when I asked him about his approach to such horrors. The example which most frequently upsets people, he said, is a Bellingcat investigation into a mass execution by the Libyan National Army, in 2017: fifteen dark blots are visible against the sand on a satellite image taken later the same day. “It’s horrible, but it’s such a good example,” Higgins said. “And if you’re geolocating bloodstains, you’ve got to show the bloodstains.”

Afterward it was time for lunch outside in the sun. Robert, the Middle East analyst, complained that he had “geolocation vision”: after a few hours of these exercises, it is impossible to look around without noting the minute textures of the built environment, the cracks in the sidewalk and the soot on the walls.

Days Four and Five of a Bellingcat workshop give the participants a chance to practice the skills they’ve just learned by launching their own investigations. Earlier this year, when Christiaan Triebert, a Bellingcat investigator, was mugged by two men on mopeds while he was in London to teach a Bellingcat workshop, he recruited his workshop participants to help him investigate the city’s moped gangs. (“My adrenaline turned into that energy—like, ‘This is pretty interesting!’ ” he recalled. “We were basically analyzing the Instagram profiles, mapping out the networks, who is friends with whom and where are they operating.”) Triebert has also run workshops in several countries where reporters are under threat of death. In Iraq, for instance, he trained reporters from al-Ghad, a radio station broadcasting into ISIS-occupied Mosul. “Some of their friends and colleagues got slaughtered by ISIS militants, and there was video of it—they were drowned in a cage in a swimming pool. They said, “We really want to know where this happened, so if Mosul ever gets recaptured we can visit, but also just to see where they murdered our friends.” We started mapping out Mosul swimming pools, and within an hour they found it.

In the London workshop, the participants split up into three teams: one was trying to geolocate a video showing a bombing by U.S. forces somewhere in Damascus; another was analyzing the connection between water shortages in Iraq and the filling of the Ilisu dam, in Turkey; a third was investigating the leaders of a recent rally in London protesting the jailing of the far-right activist Tommy Robinson. The space took on the atmosphere of a newsroom. By the afternoon, the Damascus team had divided their labor: Higgins and Reuter were pursuing a single electricity pylon in the background of the murky green night-vision footage, which they thought would be enough to geolocate the bombing; Marwan El Khoury, a forensic-science Ph.D. candidate at the University of Leicester, was trying to pick out Polaris from the constellations briefly visible in the sky, in the hopes of determining the orientation of the camera; and Beini Ye, a lawyer with the Open Society Justice Initiative, was combing through relevant news reports. “Nobody has ever been able to geolocate this video, so it’s a matter of pride,” Higgins said.

On the last day, pizza was ordered so the three teams could work through lunch. At the deadline of 2 P.M., Robert, representing the Ilisu team, got up first. “We haven’t found anything spectacularly new,” he said, “but we’ve discovered that a claim by the Iraqi Water Ministry might be more or less correct. That sounds really boring, but I think it’s important.”

The Tommy Robinson team was next. It had found out that “Danny Tommo,” one of the pseudonymous organizers of the pro-Tommy Robinson protest, was already known to the police under his real name. To some laughter, they displayed a headline from a Portsmouth newspaper reading “Bungling armed kidnappers jailed for ‘stupid’ attempt.”

Five minutes before the deadline, there had been a burst of excitement from the Damascus team: Higgins had remembered that a Russian news service had put GoPro cameras on the front of tanks when embedded with Syrian armed forces in 2015. In one YouTube video, the tank jolted from the recoil after firing its gun, and for a moment it was possible to see a pylon on the horizon—which was helpful, Higgins explained, but not quite enough. Still, that didn’t mean the crucial pylon would never be found: some photos from Bellingcat investigations have taken as long as two years to be geolocated. “It’s good that it was really hard,” Higgins told me later. “You have to rewire how people think about images. So they become really aware of how the world is constructed.”

Leclerc understood to have ignored team with pass on Vettel in...