Home Culture How to Ferment Blueberries Like René Redzepi | 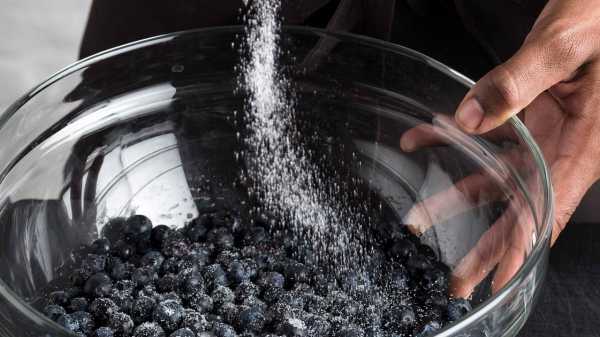 On a recent sunny morning, for a segment of The New Yorker Radio Hour, the chefs René Redzepi and David Zilber showed up at my apartment, in Brooklyn, to teach me how to make fermented blueberries. The duo live and work in Copenhagen, where Redzepi is the chef and co-owner of the famed fine-dining restaurant Noma, and Zilber heads Noma’s grandly titled Fermentation Lab, a trove of food-friendly molds and fungi that sits adjacent to the restaurant proper. They’re also the co-authors of “The Noma Guide to Fermentation,” a large new volume collecting the restaurant’s years of research, experimentation, and microbial expertise.

Fermentation—the controlled breakdown of food by microorganisms—is an ancient and fundamental culinary practice, a human innovation on par, almost, with the adoption of fire and knives. At one point considered a drab staple of “hippie food”—evoking unappetizing visions of basements full of burping sauerkraut crocks—fermentation has lately been making a strong comeback, with kimchi and kombucha regularly starring on restaurant menus and charismatic advocates like Sandor Katz evangelizing its health benefits and culinary possibilities. And the truth is that fermentation is part of all of our diets: it’s the process by which grain becomes beer, milk becomes yogurt, meat becomes charcuterie, and boring old flour and water become a symphonically tangy sourdough.

Noma didn’t start out as a fermentation-forward restaurant, but over the years Redzepi has found growing inspiration in the process’s elements of wildness and unpredictability. In the book, Redzepi writes passionately of “microbial terroir”—the unique character added to any fermentation project by the yeasts and bacteria of a specific region, a concept very much in keeping with Noma’s obsessive focus on Scandinavian ingredients and terrain. Last year, the restaurant briefly closed, for a move and a creative hiatus; at the new Noma, Redzepi told me, every dish served has a fermented element, whether it’s slices of abalone pan-fried in rice koji flour or lacto-fermented mushrooms, dehydrated, candied, and dipped in dark chocolate, delivered as the valedictory note of a dozen-course meal.

In “The Noma Guide to Fermentation,” Redzepi and Zilber begin with recipes for the novice fermenter—the blueberries we fermented together at my apartment involve nothing more than the berries and salt, mixed together in a jar and left for a week. From there, Redzepi and Zilber proceed to share increasingly complex techniques for producing homemade vinegars, misos, and kombuchas, as well as ideas for how to incorporate one’s newly fermented delicacies into daily cooking and eating. The book’s climactic chapter covers garums, remarkably pungent sauces traditionally made by introducing a controlled rot to fish (akin to Thai or Vietnamese fish sauce). In Noma’s zealously creative environment the category is expanded to include other foundational proteins, like roasted chicken wings or grasshoppers.

But first: blueberries. Settling into my kitchen, Redzepi measured out the berries into a bowl set on a kitchen scale, casually picking up any strays that rolled across the counter and popping them into his mouth. Then he tossed them with kosher salt. (The book’s master ratio for lacto-fermentation is any weight of fruits and vegetables, plus an additional two per cent of that weight in non-iodized salt.) Once the mixture was closed up in a loosely sealed Mason jar and placed in a happy, room-temperature spot on my kitchen counter, Zilber explained, the salinity would wipe out any unfriendly bacteria, allowing Lactobacillus fermentum (the “lacto” in “lacto-fermentation”) to flourish, souring and funkening the fruit. We also made a batch of lacto-fermented oyster mushrooms and a jar of hazelnut miso—a variation on standard miso using hazelnuts instead of the traditional soybeans, activated with a dollop of barley koji, a fermented grain that Zilber cultivates in large quantities and had shipped to me in advance from Copenhagen. The mixture resembled something between wet sand and grainy pastry dough; to my great delight, Redzepi was not appalled at my plan to use the fermented final product as a base for making cookies. “Not a bad idea,” he said.

The chefs couldn’t stick around to see our projects come to fruition—for all its relative simplicity, fermentation requires a serious investment of time. But, as Zilber had promised, after a week or two on my kitchen counter, the industrious bacteria had done their magic. The mushrooms gave up a phenomenal amount of liquid, a densely savory, fibrous mush floating in an earthy, cider-scented elixir. The mixture of hazelnut flour and koji had turned into a proper miso, pungent and savory with a nutty crunch. And the berries had transformed into something else entirely: salty, sour, and densely fruity. For several glorious mornings, I ate them for breakfast as the book suggested, spooned over yogurt (fermentation atop fermentation!) with a drizzle of honey. But I saved enough to bring a sample in for The New Yorker’s editor, David Remnick, who is something of a fermentation skeptic. We also tried the mushrooms, the hazelnut miso, and a few dishes I’d put together using the ferments, including an attempt at the miso cookies, which—c.c. Redzepi—even Remnick admitted were oddly addicting. “This is the saltiest cookie I’ve ever had,” he said. “Therefore, one of the best.”

1. Mix the salt and blueberries together in a bowl, then transfer them to a jar or a crock, making sure to scrape all the salt from the bowl into the container, and press the mixture down with a weight. (A heavy-duty ziplock bag filled with water will do the trick.) Cover the vessel with a lid, sealed loosely so that gas can escape.

2. Ferment the blueberries in a warm place until they have soured slightly but still have their sweet, fruity perfume. This should take four to five days at eighty-two degrees Fahrenheit, or a few days longer at room temperature. But you should start taste-testing after the first few days.

3. Once the blueberries have reached your desired level of sourness, carefully remove them from the fermentation vessel and strain the juice through a fine-mesh sieve. The blueberries and their juice can be stored in separate containers in the refrigerator for a few days without a noticeable change in flavor. To prevent further fermentation, you can also freeze them separately, in ziplock bags with the air removed.

Use the berries in a simple breakfast of yogurt drizzled with honey, or blend the pulp smooth and pass it through a sieve to make a tart, savory condiment for vegetables and meat. It’s spectacular brushed on fresh corn on the cob with a bit of butter.

This recipe was excerpted from “The Noma Guide to Fermentation,” by René Redzepi and David Zilber, from Artisan Books. Copyright © 2018.

US Republican Lawmaker Tells Iran to ‘Get Its Act Together’ or...