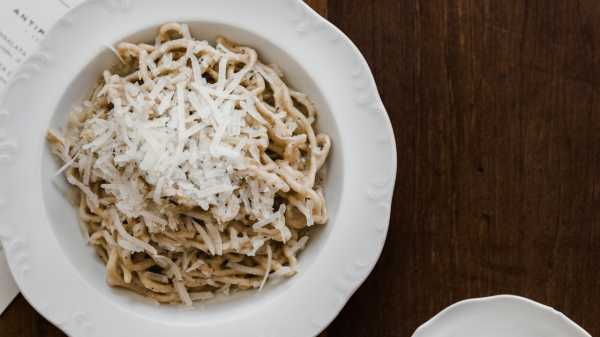 You might think that a food critic who gets to eat at new restaurants every week would have a hard time determining a favorite. And yet I do not have any trouble at all, and neither do many of my friends and acquaintances in the food world. Jeff Gordinier, the Food & Drinks editor at Esquire, is responsible for eating his way through the country, compiling a yearly list of best new restaurants. “I get asked every single day for recommendations in New York,” he told me recently. “People send me e-mails—friends from high school, friends from college, former colleagues—saying, ‘Where should I eat?’ I say, ‘You should eat at Via Carota’—and then I’ll copy-paste a list of other selections.” He estimates that he’s sent hundreds of people to Via Carota, including Rene Redzepi, of Noma fame, who concluded that if there was a restaurant like it in Copenhagen, he’d eat there once a week. “No one has ever told me that they disliked it,” Gordinier said.

Gordinier almost always runs into someone he knows there—other writers and editors, big-name chefs. I’ve heard that Missy Robbins, the chef behind Lilia, in Williamsburg, and Ignacio Mattos, of Estela and Flora Bar, are fans. People who have mentioned eating there in Grub Street’s popular food-diary column include the writer and editor Ruth Reichl, the former White House chef Sam Kass, and the best-selling cookbook author and soon-to-be Netflix television host Samin Nosrat, who also described it as her favorite restaurant in New York. In fact, it seems to me that, when you ask someone who cares about restaurants what tops their list in New York—where they most want to go on a night when they’re not casing the buzziest new spot in town but looking for a deeply satisfying meal in a deeply charming setting—eight or nine times out of ten, the answer is Via Carota. In the way that a writer can be deemed a “writer’s writer,” you might say that Via Carota is a restaurant person’s restaurant.

Interest in a New York restaurant tends to peak early in its life cycle, and to fade quickly, but Via Carota’s appeal has deepened slowly, over time. There was certainly buzz when the place opened, in 2014—it’s the product of an irresistible love story between two restaurateurs who were already doing exquisite things on their own. Jody Williams, originally from California, was first the chef and owner of Buvette, a narrow and rustic French gastroteque in the West Village with tiny stools and tiny crocks of coq au vin and tiny plates of steamed eggs—so popular, and so convincingly French, that it now has an outpost in Paris. Rita Sodi, who grew up near Florence, was an executive at Calvin Klein Jeans before she opened I Sodi, an even narrower, unassumingly chic white-tablecloth Italian restaurant just around the corner from Buvette, with a small but tantalizing menu featuring perfect pastas and Cornish hen cooked under a brick. After Williams and Sodi got together romantically, they decided to collaborate on a third place, also in the neighborhood. (A fourth, called Pisellino, will open soon.)

At first, Via Carota, on Grove Street, just off the fray of Seventh Avenue, seemed like another above-average Italian place in a city quite full of them. Pete Wells gave the restaurant a two-star review, in the Times, several months after it opened. He praised the chefs’ ability to turn out “deeply appealing food, without mugging,” and was enamored of the menu’s clear showstoppers, including the svizzerina, a sort of bunless burger made of loosely packed, hand-chopped, grass-fed steak, griddled so that the meat stayed pink but a crunchy coat of armor formed around it. In The New Yorker, my former colleague Amelia Lester liked that the restaurant avoided “many of the trappings we’ve come to associate with trendy restaurants.” It wasn’t a place that was begging—or even lending itself—to be Instagrammed. It wasn’t, as Gordinier pointed out, on every magazine’s best-new-restaurant list; it wasn’t trying to be. As such, it wasn’t a place where it was particularly hard to get a table.

My first clue that Via Carota was truly distinctive was the glassware—exceptionally thin and elegant tumblers that held water and aperitifs such as the perfect Americano, a mix of Campari, Cocchi vermouth, and seltzer, served with a curl of orange peel. All other glasses seemed suddenly unsightly and unwieldy. (I soon bought myself a similar set, and I’ve seen them at countless other restaurants in the ensuing years.) There were tiny ramekins of sweet, meaty green Castelvetrano olives, from Sicily, which are complimentary, a gesture you don’t see much these days in New York, where even a bread basket sometimes comes at a cost. There was the satisfyingly chewy and silky cacio e pepe, carried over from I Sodi, and that svizzerina, a master class in the Maillard reaction, topped with whole-roasted garlic, still in its papery peel. 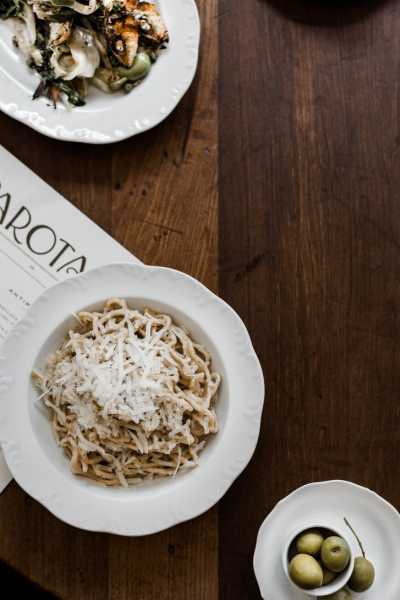 Cacio e pepe and grilled sardines at Via Carota.

Repeat visits have offered not only the satisfying consistency of these dishes but the continual discovery of new ones. The menu, printed on a single oversized sheet of paper and laid out a bit like a broadsheet (and tucked into a slot, presumably designed to hold a prayer book, in the back of each of the dining room’s vintage chapel chairs), is impressively dense with unassuming treasures. “You could eat there every day and know there will be happy surprises but no useless novelties,” as Adam Sachs, the food writer and former editor-in-chief of Saveur, put it to me the other day. Each visit has felt like fitting a piece into a puzzle; at every meal, I’ve been let in on a secret. At one meal, an old friend couldn’t believe that I hadn’t tried the olive all’ascolana, a dish for which olives from central Italy are stuffed with ground pork and then breaded and fried until crispy, like Scotch eggs with an olive in place of the egg. Those would make a good last bite before death. At a business lunch, my companion insisted we order the cibreo toscana, or chicken livers, which had never tempted me before, because their description on the menu was so plain. They weren’t pretty, but they were transcendently delicious, earthy, sweet, and rich smeared onto crusty bread.

My favorite thing on the menu is the most unassuming of all, the insalata verde, one of many standouts on the verdure section of the menu. (Via Carota is named after an old address of Sodi’s in Italy, and the name translates literally to “Carrot Street.”) Williams and Sodi pull off the unusual feat of celebrating seasonal local produce without ever using the words “seasonal” or “local,” without insisting that we pray to the produce or that the produce is so pure it needs no preparation. I first ordered the insalata after running into an acquaintance having dinner at the restaurant’s big, marble bar: in front of her was an enormous and beautiful stack of lettuce, as tall and elegantly composed as a layer cake, its ruffled leaves of butterhead, frills of frisée, and crisp petals of endive dressed in a shallot-heavy sherry vinaigrette. “What is that?” I asked. “The green salad!” my acquaintance replied, as if all green salads were half as abundant or appetizing. The dish, like most things at Via Carota, is wildly undersold, though, at seventeen dollars, certainly not underpriced.

The writer and photographer Melanie Dunea, who eats at Via Carota often and has worked with Williams and Sodi, described the restaurant’s warm, rustic interior as “feng-shui on crack.” The space feels genuinely lived-in, not just designed to seem that way. “Every single thing in that room has been hand-picked by Jody or Rita, and a lot of it has lived in their homes,” she said. Decorative objects, some of them centuries old, come and go. There’s no host stand; instead of a cash register, Dunea pointed out, there’s “an iPad that’s hidden in a picnic basket.” The place attracts celebrities, and tourists who come to gawk at them, but manages to feel relaxed, even if, these days, getting a table at dinnertime can mean a long wait. There are no reservations. By seven o'clock, you’ll probably have to add your name to the growing list, scrawled in chalk on a pillar by the door.

This doesn’t dissuade Dunea, who often goes around 5 P.M., to sit at the bar with a newspaper, or Gordinier, who is perhaps the most devout of Via Carota’s superfans. He went on a first date there with a woman who later became his wife; he proposed to her there, too, and threw himself a fiftieth-birthday party there. Talking about the restaurant, he seemed moved almost to tears. “A lot of food writers secretly long to be regulars somewhere,” he said. As thrilling as it is to eat at new restaurants all the time, he went on, “you miss home. For me, home is, like, I'm back in New York, it's lunchtime and it's a rainy fall day and I can drop into Via Carota and get absolutely perfect food and perfect service.”

Only rarely in New York does a restaurant transcend novelty, trendiness, or nostalgia to become such a beloved fixture on its own terms. As Lester discerned, in that early New Yorker review, what Williams and Sodi have is confidence—especially working in tandem. They’re not infallible. I’ve had dishes at Via Carota that I thought were just O.K.—on a recent evening, having snagged one of the metal café tables that line the sidewalk in the summer months, I was astonished by a pile of fried zucchini matchsticks, and underwhelmed by a special lobster pasta. It needed salt. But I wasn’t bothered. “The weird thing,” another food writer told me, “is that sometimes it’s not even that good, and it’s still perfect.”

How a Busker Became an International Advocate for People with Albinism...

Trying to Drive Wedge Between? US Offers Belarus Oil as Country...