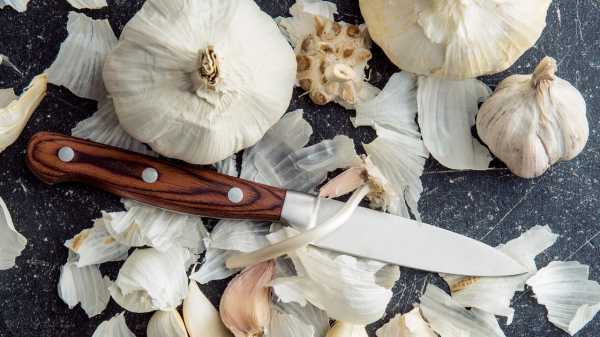 Home cooks are easily captivated by tricks for peeling garlic en masse. Put the cloves in a bowl, run hot water over them, and stir with a whisk. Spread the cloves on a cutting board and whack them with a heavy pot. Dump them into a metal bowl, invert another metal bowl and place it on top, then vigorously shake. Microwave the cloves for twenty seconds. Seal them inside a hard-sided container along with the nozzle of a high-pressure air hose, pull the trigger, and pray. All of these methods supposedly work by loosening the garlic from its papery shell by way of either abrasion (whacking, shaking, and using forceful gusts of wind) or dissolution (hot water, microwaves—the idea being that the moisture breaks down the skin but leaves the cloves intact).

A novel method, made viral this week thanks to a video posted, to Twitter, by Valentina Bachkarova-Lord, a game designer in Toronto, works by a different principle. The video shows a pair of hands using the point of a knife to stab each clove from an intact head of garlic and pop it from its skin. There doesn’t seem to have been any special soaking or pummelling first; just a strategic marriage of blade and pressure. The video is hypnotic: the garlic seems almost to want to be peeled, its cloves bursting outward in a jubilant, efficient cascade, like an Esther Williams diving sequence. I watched the twenty-five-second sequence on repeat, enraptured by the soothing, steady rhythm of the stab and twist and pull. The appeal is akin to the pleasure some people find in watching videos of bubble wrap being popped, bubble-tea pearls bursting, or the crust on a crème brûlée being shattered—a rat-a-tat of tension and resolution that, for the viewer, fires off delicious little microsurges of dopamine.

As someone who makes a lot of Korean food, this is the best method for getting garlic peeled!
👌 pic.twitter.com/14GGJDQhRj

When I tried the method myself, the gratification was less obvious. In the interest of science, I set myself up with five heads of garlic and a variety of pointy instruments, trying to replicate the easy motions in the video. There are, as best as I can tell, three secrets to this clove-popping wizardry. The first is to stab precisely into the corner of the clove, where its curved outer face meets the flat plane that touches other cloves. The second is that you need to make two sharp twists before you pull—one to crack the clove off of its stem (when holding the head of garlic upside down, as in the video, this is at the top of the clove), and a second to loosen it from its papery skin. But the real secret in the video isn’t the knife, the stab location, or the twist technique—it’s the pointer finger of the hand that wields the blade. At all times, the finger pushes firmly on the opposite side of the clove, holding it together so that the knife doesn’t simply split the clove in half. It took a while for me to get all my flexors and tensors coöperating properly; in the time I spent figuring this out, I could have peeled a few hundred cloves using the two-metal-bowls method. But I pushed on, and, eventually, I semi-mastered this push-and-twist: the cloves started popping out like champagne corks, and I felt like a king.