Home Culture “I Am the Night,” Reviewed: Straightforward, Refreshing Trashiness | 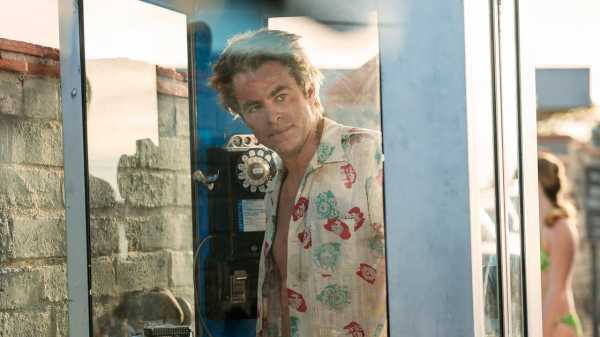 Chief among the satisfactions of “I Am The Night” (TNT) is the sight of the annoyingly handsome actor Chris Pine having his face pistol-whipped into a mass of ground veal. The directors—including Patty Jenkins, who directed Pine in “Wonder Woman”—approach their star with an attitude of jocular sadomasochism. In this show, which was inspired by a true story, Pine plays a newspaper reporter inspired by tabloid fantasy. His name is Jay Singletary, as if in homage to his existential solitude and lone-wolf heroics. As he probes the succulent seamy underbelly of nineteen-sixties Los Angeles, he is serially beaten by cops, roughed up by heavies, shamed by society, and mocked by fate. But there’s always an air of fun to it—a whiff of the shambling shamuses played by Elliott Gould in “The Long Goodbye” and Joaquin Phoenix in “Inherent Vice,” a touch of a posable action figure tortured by a schoolboy playing a cruel God. Singletary nearly loses an eye, at one point, but never his sense of humor. When he makes a move to hang himself and end it all, he takes a pratfall while fixing his belt to the rafters and picks himself up with a self-deprecating wince.

Pine’s lightness mitigates a lot of paint-by-number murk in the course of this miniseries—six episodes of louche noir, mildly feverish nonsense, and murder-mystery comfort food. Singletary served in the Marine Corps, in Korea, and his P.T.S.D. is such that the bang of a chair falling backward will set him diving under a restaurant table to dodge the fire of machine guns echoing on the soundtrack. Once a crusading reporter, now a bottom-feeding busybody, he medicates his lost idealism with whatever coke or junk he can scrape from his stash box. He quits cold turkey and relapses posthaste. He has an argument with a girlfriend that ends with him quoting “Hamlet.”

Tracing the wayward path of a sinister physician named George Hodel (Jefferson Mays), Singletary stumbles upon his granddaughter, Fauna (India Eisley). The series opens with her, a fair-skinned girl living in small-town Nevada, where she has been raised by a black woman who told the girl that her absent father was dead and white. (The series adapts the real Fauna Hodel’s memoir, “One Day She’ll Darken.”) The girl discovers that her mother is her adoptive mother, that her birth certificate indicates her father as an anonymous black man, that her white grandfather is a prominent L.A. doctor. Fauna strikes out on the Greyhound and gets to L.A., where, seeking to understand her parentage, she strikes out some more. The show’s attention to racial issues is better than cursory. But don’t let the fact that its producers include Carl Franklin—whose adaptation of Walter Mosley’s “The Devil in a Blue Dress” explored racial lines in old L.A. with real heat—get your hopes up too far.

The meat of the thing is pure pulp. Dr. Hodel—whom Singletary investigates both as a black-market abortionist and as the Black Dahlia killer—is a howlingly overripe villain. A patron of the arts, he makes impossibly haughty declamations about Surrealism and effortlessly crushes his underlings on a chess set designed by Man Ray. His connoisseurship derives from the Hannibal Lecter school of art appreciation. When playing party host, he apparently gathers ideas for decor and for parlor games from the “ ‘Eyes Wide Shut’ Guide to At-Home Entertaining.” And “I Am the Night” is precisely the sort of Los Angeles noir that encourages his menace to loom above the hills like Noah Cross in “Chinatown.” “Justice in this town is a protection racket,” someone says. “The fix is in, and it’s not gonna change.” There is a kind of security to this mass of clichés, as when, again and again, we go to commercial break with the camera revealing a goon shadowing Fauna from his gleaming black car.

Clearly, “I Am the Night” works some of the same territory as “True Detective”: the haunted masculinity, the Freudian hogwash, the personal demons of sleuths, the gratuitous invocations of the occult. But the basic beats of this show’s mystery plots, and the James Ellroy–like texture of its sleaze, are more straightforward than what “True Detective” is selling. Despite the absence of a badge, Singletary might be the truest detective on television. There’s a refreshing honesty to his trashiness.

Russia Plans to Issue About $7Bln Worth of Eurobonds