Home Culture In “Brexit,” Benedict Cumberbatch Is a Peculiar Man Who Wants to Upend... 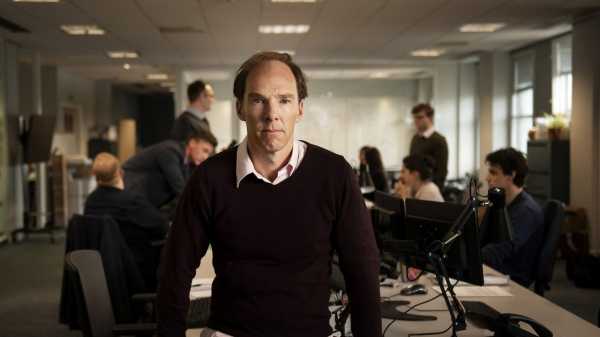 At the start of “Brexit,” on HBO, Dominic Cummings (Benedict Cumberbatch) addresses the camera from the floor of a supply closet. The tale he tells is about the victory, in June, 2016, of the Vote Leave campaign in the referendum determining Great Britain’s continuing membership in the European Union. Cummings, as the victorious political strategist, is the tale’s antihero. The supply closet is a confessional booth and a meditation chamber, to which this peculiar figure recedes to concentrate on upending the order of the world.

“Everyone knows who won,” Cummings says, “but not everyone knows how.” Let’s set aside the fact that the version of “how” in this film—written by James Graham and directed by Toby Haynes—has been the subject of some dispute in the United Kingdom, where it aired earlier this month. The film really dwells on what won. It’s a crisp political-messaging procedural, outlining a triumph of data over knowledge and tribal fear over human reason. The parallels between the Brexit vote and the Trump debacle are incidental to its substance but essential to the interest of American viewers.

In the fall of 2015, Cummings opens his door, in London, to receive a job solicitation from a couple of Euroskeptic players. That this putative genius is puttering around the house in a T-shirt during the business day speaks toward his temperament, which hasn’t boded well for his employability: other characters describe him as “an egotist with a wrecking ball,” “a career sociopath,” and “basically mental.” That the T-shirt bears the legend “When in Rome” is a smirking portent of decline and fall. “Brexit” presents Cummings as a grand thinker with ambitions of “altering the matrix of politics” and a tragic inability to see the destructive force of his deconstructive vision. His righteous contempt for the political system translates into a villainous disregard for citizens. Treating his country as a laboratory for conducting a political-science experiment, he is, in the most charitable view, doing the wrong deed for the right reason.

The film concentrates on two interwoven sins of the Leave campaign. To reach a sympathetic portion of the electorate—especially, the three million potential voters generally alienated from the political system—Cummings and his bedfellows work with AggregateIQ and Cambridge Analytica, two data firms controlled by Robert Mercer, to micro-target marks on social media. (In his small role as Mercer, Aden Gillett is a lean and spectral presence, with a voice full of ash. For a moment, I thought that it was James Cromwell playing Slender Man.) To exploit xenophobia, Cummings’s group leans on fears about the accession of Turkey to the E.U. and leaves it to the likes of right-winger Nigel Farage to “do the heavy lifting on the immigration stuff.” The stoking of fear precipitates the murder of the Labour Party M.P. Jo Cox, an opponent of Leave, by an assassin who shouted “Britain first!” as he attacked. Seeing this news, Cummings frowns, frets, and gets back to work countering the cerebral appeals of the Remain campaign with dark appeals to the “hearts” of the people—“their hopes, their dreams, their aspirations, their fears, their suspicions.”

“Brexit” is nicely ambiguous as to whether Cummings is a misguided genius or simply a talented opportunist, and Cumberbatch is excellent at conveying the lonely monomania of a man stubbornly devoted to principles that only he recognizes. Coming home to his pregnant wife and collapsing on their bed, he groans, with more resignation than self-pity, that nobody likes him. “Oh, I like you,” she says, the consolation of it undercut by her implicit acceptance of the premise. The movie hints that a complication in her pregnancy is a divine retribution for the pain he inflicts on their country; “Brexit” ’s weakness for cheap-but-effective touches is evident here, as on the heavily ironic soundtrack. Near the end, we get a version of “God Save the Queen” seemingly emitted by a fright-show organ or freaky harpsichord—an anthem for a politics confounded by knavish tricks. We also hear a bit from the glorious Ninth Symphony by Ludwig van Beethoven, as if to announce “Brexit” as a dystopian thriller glossing an apocalypse currently in progress.

Obesity epidemic grows in adults; perhaps levels off in youth

An AI helped us write this article