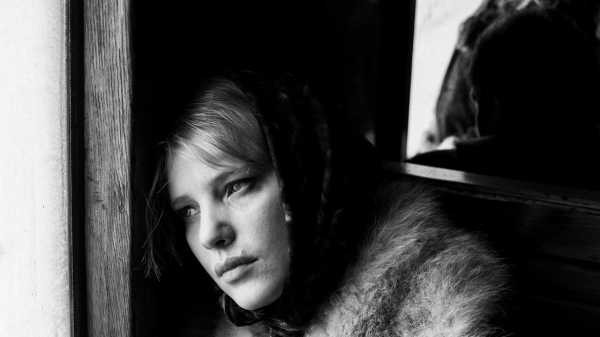 On a frigid Wednesday in mid-December, I met the Polish director Pawel Pawlikowski in the cavernous gallery space of Dia:Chelsea, just off a wind-scoured section of the West Side Highway. He was in New York to promote his latest film, “Cold War,” days before it swept the European Film Awards, winning awards in five of the six major categories in which it was nominated. We sat in the center of the space where Blinky Palermo’s “To the People of New York City” was on view, surrounded on all sides by the series of black, cadmium red, and cadmium yellow panels, like methodically rearranged German flags. We slipped into a conversation about Berlin, a city featured in “Cold War” as a narrative bridge between Warsaw, in the East, and Paris, in the West. “It was the one open city, you know? The Iron Curtain was already dropped. But Berlin was still an open city, bizarrely,” Pawlikowski said. “You imagine Berlin in the Cold War in terms of the Wall. The Wall was only built in sixty-one. It was built because people could cross too easy.”

Pawlikowski remembers his father describing how he walked across the border from East Berlin in the nineteen-fifties, a scene that is reimagined in the black-and-white palette of the film. “But he came back because he had his life in Poland,” Pawlikowski said. The filmmaker talks about his father and his mother as if they are never far from his mind. “Cold War” was inspired by his parents’ exceptional love story; the film’s main characters, who are named for his parents, Zula and Wiktor, are caught in a tortuous romance. As the borders of Europe become more closed, the lovers grow more embittered about their circumstances, and each other. In the film, this plays out in striking snapshots, over fifteen years, but the romance that inspired it took place over four decades, from 1948 to 1988. “The forty years of their adventure completely coincided with the Cold War,” Pawlikowski said. “Basically, their whole lives were overshadowed by that. And by their character problems, too. So you don’t know where one ends and the other starts.”

Pawlikowski’s films often weave historical conflict into the characters’ lives and relationships, to the point that personal and political turmoil can become indistinguishable from each other. In his first English-language feature, “Last Resort” (2000), a Russian woman, forced to seek asylum in England after her fiancé abandons her, is shipped off with her son to a dilapidated seaside town that serves as a makeshift holding tank for refugees and other marginalized people. In “Ida” (2013), his first Polish-language film, an orphaned young woman connects with her one living relative in postwar Poland before taking vows at the convent where she was raised, and begins to uncover facts about her parents’ deaths during the Nazi occupation. “Ida” is spare, reticent, shot in black and white, and full of ellipses; Pawlikowski said that its style came from a confidence that he has found through growing older and learning how to ask, as he told me, “What is necessary here?”

In “Cold War,” Zula (Joanna Kulig) and Wiktor (Tomasz Kot) meet when Zula cons her way into a folk ensemble and becomes an emerging starlet by way of informing on Wiktor, the ensemble’s music director. Zula, who has escaped from an abusive father and has a criminal record, is targeted by the Party man who oversees the troupe and is pressured to coöperate in order to stay in good standing. Wiktor and Zula’s charged flirtation develops into a passionate romance, which continues even after Wiktor discovers Zula’s betrayal. Wiktor—captivated by Zula’s survivalist spirit, her talent, and her originality in a world that he finds repressive and uninspiring—attempts to convince her to cross the border into the West. Wiktor fails to understand why Zula, whose lot is newly improved, would want to stay; Zula believes that Wiktor would never leave her behind. Over and over, the couple is separated by borders and ideologies.

Pawlikowski’s mother also left home as a teen-ager to pursue a career as a performer, though she ran away from an upper-middle-class family, rather than the wrong side of small-town tracks. When she met Pawlikowski’s father, in 1948, he was studying to be a medic, not a musician. (Pawlikowski said that he wrote his characters as musicians in part for music’s ability to carry a film through time—folk, ensemble, jazz, and rock all delineate stages of the characters’ lives.) The director describes his young parents like they are nineteen-fifties movie stars caught in a torrid onscreen romance. “He was this tall, mysterious, very good looking guy,” he said.“He kind of looked like Gregory Peck. She was blond and hotheaded. Full of energy . . . kind of like mood swings. He was a terrible womanizer. So when they got together, he kind of assumed a man can do it. And she immediately retaliated in kind.”

In the first ten years of Pawlikowski’s parents’ relationship, the couple split up and reunited multiple times before having him, their only child—a push and pull that is re-created in scenes in Paris and Yugoslavia, where Wiktor and Zula are briefly reunited and then forced to return to their lives in different countries, on opposite sides of the Iron Curtain. “They had me, and we lived in a tiny flat, like people did in Warsaw,” he said, of his early childhood. “Accomodation was a problem. And that doesn’t help with relationships, especially having a kid. There were just two small rooms and a kitchen. And then they quarrelled a lot. And they drank a lot. As a doctor he was kind of a cultured, educated man; she was cultured, educated. But it was quite feisty, the whole thing. There was a lot of nastiness. And even physical violence, which was kind of disturbing.”

When the couple divorced, in 1968, his father moved to the West for political reasons, and his mother married one of a number of suitors who appeared afterward. She moved with her son to England, in 1971. Unable to return to Poland after staying on illegally in England, Pawlikowski eventually joined his father where he was living in Germany. After years apart, his parents were reunited in Germany, where they left their respective spouses and remarried. In the film, Zula also marries a foreigner, an Italian, and leaves Poland, eventually reuniting with Wiktor in Paris. Like Pawlikowski’s parents, the couple enjoys a brief period of domestic bliss, before their “character problems” start to complicate things again.

Through every separation and complication in “Cold War”—including Wiktor’s detention in a labor camp—the characters remain fatefully drawn to each other. Like the film’s hero and heroine, after decades of turbulence, Pawlikowski’s parents eventually reunited one last time, late in life. “In the end, with all of these changing landscapes, and politics, and people, they just had each other,” Pawlikowski said. “They ended up living together in Munich, too tired to fight, and very ill. So in the end they were just kind of like a doddering old couple, but totally in love with each other, and holding hands. They were just the most tender, touching couple. Again, knowing that there’s nothing in the world more precious, or important, or stable than each other.”

When his parents died, in 1989, just before the end of the Cold War, Pawlikowski felt a huge absence in his life, the absence of a “fatherland and motherland,” as he described it. The desire to depict the war between them increased over the years. “After a while, they kind of grew into this amazing love story. Like the mother of all love stories, for me. And great because it didn’t look like a love story for most of the time. But it’s the end that justifies the story,” he said. Pawlikowski told me that he felt encouraged to embark on the film after the success of “Ida,” which won the Oscar for Best Foreign Language Film, in 2015. “The fact was that this small Polish film, very focussed on a few people, had something universal and transcended borders,” he said.

Pawlikowski talks about his directing career with a sense of irony, as if his success is somewhat unexpected or surprising. He brings a similar mordant humor to his films, which never give in to melancholy. In “Cold War,” Zula maintains her sardonic bite to the bitter end, delivering deadpan quips even as years of separation and suffering have stolen the couple’s hope for happiness in this life. Humor cuts through the film’s most solemn moments. In one scene where the couple is reunited, worn by the years, physically and mentally broken, Zula stumbles drunkenly off stage and hurls herself in the direction of Wiktor, pausing just long enough to say, “I love you to bits, but I need to throw up.” When I suggested that the film was cerebral, Pawlikowski quickly corrected me. “But sensuous, too,” he said. “Cerebral films I have problems with.”

Train Going From Italy to Austria Stopped Amid Coronavirus Fears

Did Kylie Jenner cause Snapchat to lose more than $1 billion...