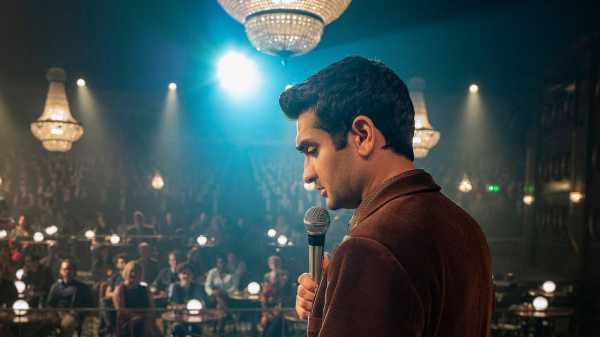 “The Twilight Zone,” the landmark anthology series, is back, as a revival on CBS All Access, with Jordan Peele, the director of “Get Out” and “Us,” as its executive producer, occasional writer, and Rod Serling-like figurehead—he is the host and narrator, with a crisp pocket square at the breast of his undertaker’s suit. The costume department did not take sufficient care to keep the jacket sleeves from bunching, but that is how things go with this reboot: fine material, but some careless tailoring.

As ever, the show inhabits “the middle ground between science and superstition,” to quote its intro. The first episode opens on a comedy-club mural, in which a crowd of partygoers in evening clothes tilt up their chins and grin—an invocation of the ballroom photograph from the Overlook Hotel in “The Shining.” (Kubrickian chilliness and Stephen King-ly bizarreness are among the modes of the series, as is genre-geek homage-unto-itself.) The stand-up comic onstage, Samir Wassan (Kumail Nanjiani), bombs with a set of sincere and cerebral material about the Second Amendment. Repairing to the bar to console himself, Samir meets a famous comedian, played by Tracy Morgan, whose performance brings a sinister edge to his familiar edgy clowning.

Like a djinn, or a devil at the crossroads, the legendary performer tells Samir to make his material more personal, to tell stories his audience can connect to. There’s a caveat: “Once they connect to it, it’s theirs, and once it’s theirs, that shit is gone forever.” What follows is a fable imagining the birth of an art monster. Samir tells a joke about his dog, and soon the dog is missing, even from photographs. It’s all downhill from there, except for his career. As a statement about the neediness and narcissism of artists—a ghastly exploration of the consequences of believing that everything is copy—the episode is acute. The mania that Nanjiani builds to in Samir’s climactic set, in which the performer describes himself as “a garbage can who needs lots of money and validation emptied right into me,” sells the cold sweat of the mood.

Episode 2, titled “Nightmare at 30,000 Feet,” escalates an original “Twilight Zone” script (previously remade, by George Miller, as one segment of “Twilight Zone: The Movie,” in 1983) from a story of panic attacks and furry monsters to a tale of mental breakdowns and monstrous self-sabotage. Adam Scott plays a magazine writer, who, after discovering an MP3 player where his sick bag should be, begins listening to a podcast episode from the future, which investigates the disappearance of the plane he is on. The first-class passengers—especially those in hijabs—become a special focus of this good liberal’s newfound paranoia. “Nightmare at 30,000 Feet” looks like a puzzle, but it plays out like a yarn; still, there is pleasure in following its loose ends. As often is the case in Peele’s work, comedy underlines the unease and acidifies into social critique, as when the nervous flyer approaches a couple of turbaned fellows who have not stowed their electronic devices. “Thank you for your input,” one of the guys says, “but you know we are Sikh, right?”

In a weird quirk of corporate fate, CBS All Access, the streaming service of a mostly conservative network, will present an unnerving piece of socially progressive fiction, on April 11th, when an episode about Black Lives Matter enters this dimension of imagination. Peele introduces the protagonist of “Replay,” played by Sanaa Lathan, as “Nina Harrison, a woman who left her past behind to provide a better future for her son.” She is driving her son, Dorian (Damson Idris), past her old Virginia home, toward the historically black college where he will study film. At a diner, she discovers that an ancient camcorder can reverse time with a push of the rewind button. This feature proves essential after an encounter with a racist cop, who is played, terrifyingly, by Glenn Fleshler, as an amalgam of Schwarzenegger’s Terminator and Mississippi’s Lawrence Rainey. It’s like Nina is rebooting a first-person shooter game in which her kid is always and only a target.

Getting to the message of “Replay” is a bit of a mess. I love its protest, but I am unsure that I entirely like its art, what with the mama lion confronting the corrupt police force by saying, “You’re the one who’s really afraid,” in a scene suggesting an ill-considered P.S.A. for the United Negro College Fund. As often happens on “The Twilight Zone,” the plot is less brilliant than the premise. The episodes do not prove uniformly coherent, but they do reward close scrutiny. The study of this dimension is a fine use of spacetime.

Stephen Moore is not worried about his Fed board confirmation

How Eric Dolphy Sparked My Love of Jazz |