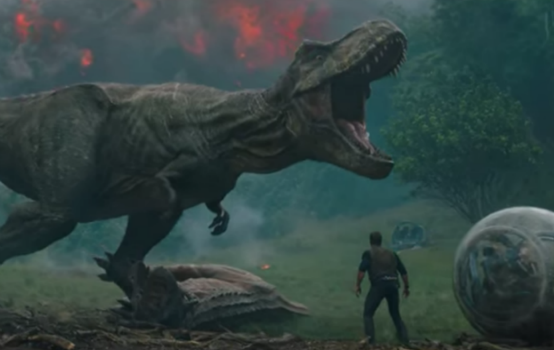 As Jeff Goldblum’s Ian Malcolm once warned us, “Oooh! Ahhh! That’s how it always starts. Then later there’s running and screaming.” That’s certainly the case in Jurassic World: Fallen Kingdom, the fifth installment in the long-running dinosaur adventure saga. Some things change, but others don’t.

We pick up with Claire Dearing (Bryce Dallas Howard) three years after the fall of the Jurassic World theme park. As it turns out, the island’s volcano is days away from erupting and killing everything nearby. But Congress won’t act, despite the protestations of Claire and her motley band of “Dinosaur Protection Group” activists.

Benjamin Lockwood, an old business partner of John Hammond’s (remember him? Spared no expense) has other ideas. He’s interested in rescuing a few key species—especially Blue, the last surviving velociraptor—and transporting them to a new sanctuary. And so, with the help of raptor wrangler Owen Grady (Chris Pratt), Claire and crew head back to their old stomping grounds. Mayhem ensues.

Obviously, this will feel pretty familiar to anyone who remembers 1997’s The Lost World. And true to form, there’s plenty of tooth-gnashing carnage (a standoff with a marauding Baryonyx in a lava-drenched control room is particularly memorable). Director J.A. Bayona throws in plenty of haunting imagery—really, some of his shots are breathtaking—while not straying too far from the franchise’s familiar tropes.

Thematically, though, Fallen Kingdom is something quite different from its predecessors.

The four previous Jurassic Park installments are all pretty straightforward. Yes, there are a few nods to the dangers of uncontrolled science and the perils of greed, but these are generally presented in obvious and utilitarian ways: it’s dumb to transport tyrannosaurs on cargo ships. Breeding velociraptors is bad because they might kill you. Dinosaurs are valuable because they’re cool. And so it goes.

That’s not a criticism per se—simply an acknowledgement that the Jurassic Park flicks don’t really have much on their minds beyond a kind of primordial dread, rooted in the unending struggle between predator and prey. Out here in the jungle, the films declare, man is no longer at the top of the food chain. Full stop.

Fallen Kingdom goes in a different direction. Though the phrase is never used onscreen, the movie is infused with a far stronger sense of natural law—of good and evil rooted in the fabric of creation—than any of the other films. The evil here isn’t simply that scientific experimentation may have unintended consequences, but that it is fundamentally deviant for humans to engineer new life for the sole purpose of exploiting it. In a stomach-turning sequence, caged dinosaurs are auctioned off to international arms dealers committed to turning them into bioweapons. This, Fallen Kingdom declares, isn’t just dumb: it’s wrong.

We eventually learn that Lockwood’s “granddaughter,” Maisie, is actually a clone of Lockwood’s late daughter. Crucially, this revelation isn’t presented as a triumph of scientific magic, but as something horrifying and unconscionable—with implications that parallel those stemming from the large-scale manufacturing of dinosaurs and their sale to the highest bidder. Children, Fallen Kingdom suggests, are never to be treated as commodities; it’s hard not to see a veiled critique of surrogacy, “designer embryos,” and so forth.

That’s not all. Towards the film’s end, when Maisie makes a dramatic choice that rescues a herd of dinosaurs from imminent death, her justification is simple: “They’re alive. Like me.” It’s a powerful line, particularly coming from a character with her backstory. Whether intentionally or not, it sends several pointed messages: that children’s lives are intrinsically valuable regardless of the circumstances of their conception, that children do not exist for the sake of adults’ preferences, and that any sound environmental ethic must also account for the dignity of individual human beings.

Fallen Kingdom is, in short, committed to a “consistent life ethic” in ways I’ve rarely seen in blockbuster cinema. (I actually found myself wondering whether Bayona is himself Catholic, given how closely these ideas track those of Pope Benedict XVI’s final encyclical, Caritas in Veritate.)

Alas, much though I’d like to give Fallen Kingdom an unqualified thumbs-up, I’d be remiss in my duties if I didn’t note some truly glaring plot holes. It beggars belief that Claire—who in Jurassic World was utterly incapable of seeing her dinosaurs as anything other than “assets”—has become a dinosaur rights activist. Likewise, it makes no sense to talk of dinosaurs going extinct a second time—as The Lost World and Jurassic Park III painstakingly demonstrated, the backup island Isla Sorna is positively brimming with prehistoric biodiversity. (It’s also possible that I’ve watched these movies far too many times and have far too many opinions.)

That said, Fallen Kingdom is mostly a success. To its great credit, it resists the ever-present “embiggening” temptation—the tendency of so many big-budget sequels to simply increase the amount of CGI spectacle onscreen. (“Why not have two T-rexes?!”) Instead we get a leaner, darker tale that pushes the series to places it’s never gone before. Given that Fallen Kingdom would almost certainly rake in hundreds of millions simply by duplicating the series’ time-tested formula, shaking up the status quo is a gutsy move. And it largely works.

(A quick heads-up for parents: Fallen Kingdom contains extended scenes of a young child being hunted through a family home by a genuinely terrifying creature. If you thought the “raptors in the kitchen” scene was the stuff of nightmares, you ain’t seen nothing yet. Don’t bring small children.)

Narrative twists aside, Fallen Kingdom doesn’t totally reinvent the wheel. We’ve still got islands, dinosaurs, nefarious scientists, and so on. Those agnostic about these films likely won’t find themselves persuaded this time around. Nevertheless, as summer blockbusters go, Fallen Kingdom is a pretty good one. Even better, it has more on its mind than claws and fangs.

John Ehrett is a native of Dallas, Texas, and currently lives in Los Angeles, California. He holds a J.D. degree from Yale Law School and a certificate in Theology and Ministry from Princeton Seminary.