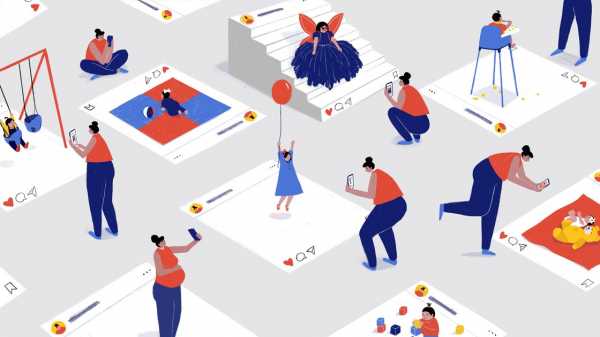 For the vast majority of people, checking Instagram involves a mix of aspirationalism and voyeurism; the app feeds on a collective fear that we are missing out on something, whether it’s a fabulous party, a pop-up sale, or the mere concept of vacation. But the same dynamic doesn’t quite apply to parents sharing pictures of their young children online. There certainly may be an element of proud boasting: “Oh, this? It’s just my daughter’s tastefully mismatched outfit,” “Admire my toddler son’s taste in jazz,” etc. But these carefully chosen glimpses of adorable bliss often do little more than mark a tranquil reprieve during an otherwise arduous day. The isolation of parenthood delivers one to strange places, especially in the early going, and you need your tribe. Sharing images or stories on social media makes the experience bearable, connecting one to a larger world at a time when the scales and contours of life feel as though they are shrinking.

All of this seems harmless enough—annoying, even, if you have hit your saturation point of doughy newborns. Sometimes we annoy ourselves. I used to go out of my way to maintain the lowest of profiles on the Internet, yet I now resemble a member of the paparazzi, chronicling every mildly comical turn of my son’s life. He never got to choose to not be on the Internet. What happens when the slow telos of parenthood meets the insatiable rhythms of social media is the subject of “Sharenthood: Why We Should Think Before We Talk About Our Kids Online,” a new book by Leah Plunkett. Plunkett argues that “sharenting” happens any time an adult in charge of a child’s well-being, such as a parent or a teacher, transmits private details about a child via digital channels. Some of these activities clearly involve a public, such as posting pictures of your child on Facebook, or blogging about your kids. Others seem to happen in private but often end up turning your child into a set of data points, via fertility apps or Amazon wish lists, the use of a Nest cam, or photos stored on a cloud server. Though these platforms and devices aren’t exploitative, per se, Plunkett argues that they involve adult decisions that accelerate a child’s entry into “digital life.” Studies estimate that by 2030 nearly two-thirds of identity-fraud cases affecting today’s children will have resulted from sharenting.

For Plunkett, who is an associate professor at the University of New Hampshire Law School and a faculty associate at the Berkman Klein Center for Internet and Society, at Harvard University, there are a couple of reasons to be concerned about sharenting. On a philosophical level, sharenting exposes children to the larger digital world without their consent, robbing them of a kind of agency. It exposes them to platforms that they might have opted out of altogether—and deprives them of the choice to never be on social media in the first place. As Plunkett argues, adults sharent because the online world “makes it very easy to do and even encourages it.” And parents do so without considering the long-term repercussions, while the possibilities for harm continue to change every day.

This feeds into Plunkett’s second, much broader concern. The underlying problem with sharenting is the same with many adult-world surveillance and privacy issues: the bargain we have made in exchange for these services is that we surrender our data and choose not to imagine the worst-case scenarios. At a time when we’re increasingly aware of data privacy and surveillance, what unforeseen consequences might there be to maintaining what Plunkett terms a “digital dossier”—especially one that stretches all the way back to the parents’ gleeful Facebook post revealing that they are expecting? We’ve grown accustomed to someone in the public eye apologizing for an idiotic tweet from when they were a teen-ager. What if that record stretched back even further? Could things parents post about children produce real-world outcomes, in terms of fodder for bullying, professional reputation, or future prospects? Could the fact that children already exist as online entities affect a child’s “ability to develop their own sense of self”?

We have long taken for granted that companies such as Facebook and Google collect data on us and then pass that data on to advertisers. But the 2016 election confirmed that our individual whims could be useful to politicians as well. Plunkett speculates a future in which such data collection, used to forecast our tastes or allegiances, could begin at conception. Today, long before children take their first step, their digital data already travels to “thousands, likely tens of thousands, of human and machine users.” How long until someone claims the power to predict who a child will become as an adult based on these data points? At a time when the desire for metrics seems boundless, what if a child’s development, tracked online, could translate into a “personal capital” score, akin to China’s “social credit” system? How far back could a college-admissions officer or credit checker peer into one’s engagement with social media? Plunkett is describing a set of questions, about data and privacy, that many of us already grapple with. Yet it all seems particularly nefarious in the context of children, for whom a defining condition of life is that they are captive to forces they cannot possibly grasp.

Plunkett has described “Sharenthood” as a placeholder rather than a polemic, and it’s useful to approach her work this way. It’s an occasion for a broader conversation, at least before resigning ourselves to the new normal. For example, most people used to take photographs in order to document something for themselves and for posterity. Nowadays, that experience is compressed, such that many of us take pictures with the intent to immediately share them with other people. A lot of “Sharenthood” can seem a bit abstract, and Plunkett’s instinct, as a legal scholar, is to press toward hypotheticals. The laws governing child labor, Plunkett reminds us, originally presumed the “factory floor or the family dairy farm.” It’s harder to figure out how a child can opt out of their role in a mommy or daddy blog. Plunkett doesn’t have many concrete answers, and the book can meander, following a loose, speculative energy.

Its most gripping moments come when she imagines scenarios that seem both far-fetched and, when you think more deeply about the direction of technological innovation, a bit inevitable. For decades, there have been toys, from Teddy Ruxpin to Tickle Me Elmo, designed to mimic one-on-one engagement with a child. What about a future involving “smart” toys with the machine-learning capability to actually converse with, or teach, children according to their individual quirks? How far into the future is what Plunkett calls “smart Elmo?” A toy that teaches and sleeps alongside your child while also tracking his or her consumer choices?

The territory of the “commercial sharenter” is where Plunkett’s queries about the ethical dimensions of putting your kids on the Internet merge with her concerns about data and surveillance. New parents, for whom commiseration becomes a kind of currency, represent an attractive audience. You can begin to see why bloggers or YouTubers who dispense parental advice rooted in anecdote or experience can be so successful. Someone with a few more months’ experience—and, say, with a child who eats vegetables—can suddenly seem like a prophet, telling of the glories that await in another land.

Yet turning one’s family into content occasionally leads somewhere dark. Plunkett mentions “DaddyOFive,” a popular YouTube channel run, until 2017, by a couple named Michael and Heather Martin. The Martins, who were both in their mid-thirties, weren’t offering advice. Instead, they specialized in “prank” videos involving their five children, essentially poking fun at their own negligent approach to parenting. At its height, “DaddyOFive,” which Michael started in 2015, had about seven hundred and fifty thousand subscribers. As the channel grew, it attracted more viewers who felt that the parents’ antics, which occasionally involved slapping or yelling at their kids, or telling them that they were being put up for adoption, or breaking their toys, were cruel. Although the Martins claimed that the videos were staged and that their children consented to playing their roles, authorities eventually intervened. A psychologist in the trial found that two of the children, who were nine and eleven at the time, had experienced “observable, identifiable, and substantial impairments of their mental or psychological ability to function.” The Martins were sentenced to five years of probation, and, though the videos were deleted, Plunkett explains that the abused children are forced to experience “perpetual reruns.” The Martins’ attorney assured the court that the couple would become more “careful” with their children and social media.

From Plunkett’s perspective, the legal side of things can’t possibly anticipate the long-term effects of the Martins’ aggressive sharenting. The Martins’ five children will continue to grow and, like most tweens and teens, figure out who they are. Yet a version of them, bawling and pleading, will remain on the Internet, frozen in time. The Martins, however, just represent a more extreme version of how many of us live online, expanding our networks, sharing our lives with people beyond our physical reach. It’s hard to feel like you’re in the same universe as the Martins when you’re simply posting a clip of a child dealing with brain freeze on Facebook. But Plunkett’s argument is that these acts rest on the same continuum. As the psychiatrists Rebecca Schrag Hershberg and Daniel T. Willingham recently argued, laughing at a child’s foibles is never “innocent.”

Perhaps Plunkett’s greatest contribution is how fastidiously she parses the term “sharenthood,” which has circulated since at least the early twenty-tens. As often happens, the mere act of giving this pattern of behavior a name has the effect of rendering it suspect, if a bit lame. As a shameless sharenter—albeit one with poor, if not nonexistent, commercial instincts—“Sharenthood” made me consider my own choices: whether it was healthy to use my son’s e-mail address to sign up for mailing-list-only coupons, why YouTube only recommends pirated cartoons to me these days. Yet it’s impossible to generalize from a child’s perspective. Some kids grow to be embarrassed by what their parents post, while others wonder why they aren’t featured even more. Mine might one day wonder why so many videos exist of him asking for “jazz,” which, for a while, was the word he used instead of “music.” “Sharenthood” didn’t resolve anything for me, and maybe that’s asking too much. In the end, Plunkett’s advice is to “make more mindful choices” about our digital lives. Yet parenthood is often such a blur that mindfulness seems impossible, a kind of deliberation and peace that might as well be another country. As adults, we should know better—even if we often have no idea what we are actually doing.

Russia Registers 1 Ceasefire Violation in Syria Over Past 24 Hours

Whyte vs Browne: Vote and join the debate on who wins...

Bitcoin Dealers Beware! Mining Might Be Cause of Russian Apartment Block...