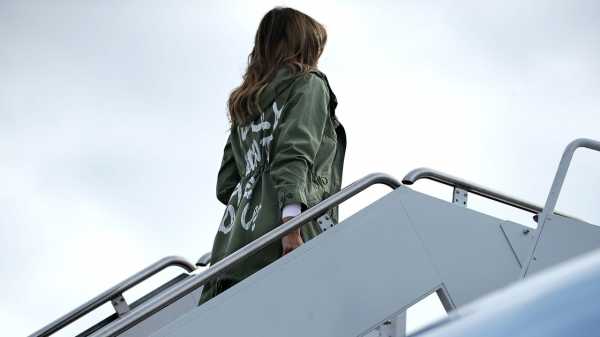 As all the world ought to forever remember, the White House has predicated a national disgrace in its treatment of migrant children. On Thursday, Melania Trump did her part to freshen up this self-evident tragedy by making a costume choice out of the theatre of the absurd. Embarking on the charade of a visit a children’s detention center in McAllen, Texas, the First Lady arrived at Andrews Air Force Base wearing a military-style jacket, somewhere between olive and army-green in color, somewhat resembling an M-51 fishtail parka in style, with white text scrawled across its back: “I REALLY DON’T CARE DO U?”

It was, as they say in high-school dress codes, inappropriate. Pressed for comment, the First Lady’s office declared, “There was no hidden message”—quite sensibly so, for, as the world immediately observed, its message was readily legible. But the statement stretched too far in expressing a hope that “the media isn’t going to choose to focus on her wardrobe.” The former Melania Knauss began a career in commercial modeling at the age of sixteen. Wearing clothes is her foremost métier, and the clothes she was wearing, in the context of her husband’s inhumane treatment of immigrants, and everyone else, constituted the most significant conjunction of clothing and incipient fascism since Hugo Boss débuted his collection for fall/winter 1938, unless you count the snapback MAGA cap.

It is reported that this piece of dégagé garment has been available, at Zara, for thirty-nine dollars. I suppose its general intent is to serve for a woman who wants to distinguish, and perhaps to ironize, her participation in the entrenched trend of military wear by professing unconcern with style. (Crucially, the “really” precedes the “don’t,” where “clearly” would act as an intensifier. Some early reports on the coat transcribed its message, erroneously, as “I DON’T REALLY CARE”—a more ambiguous phrasing, in that it might confess a deception.) The coat offers a statement that its wearer is not wearing a fashion statement but has just thrown on something basic to walk the dog in the drizzle or jaunt down the block for a beer. 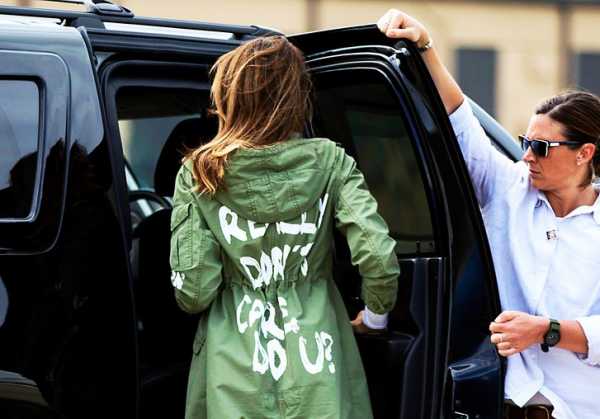 The aggression of the question that rounds out the text—“DO U?”—is almost intriguing. Maybe it means to be playfully chiding: Do you really care about army jackets? Maybe it is a fast-fashion spoof of streetwear provocation: How could you really care about paying twelve times as much for Off-White, or whatever? To be generous, you could suppose that the coat, when worn by a person whose husband has not presented any authoritarian tendencies, announces a Bartleby-like defiance, an Oblomovian apathy, and an indifference comparable to Meursault’s in “The Stranger.” More stingily, you could turn to Fran Lebowitz’s first essay collection, “Metropolitan Life,” which includes a three-paragraph harrumph titled “Clothes with Pictures and/or Writing on Them: Yes—Another Complaint.” “I mean, be realistic,” Lebowitz writes. “If people don’t want to listen to you, what makes you think they want to hear from your sweater?”

I would be sympathetic to the theories, now circulating on Twitter, that the First Lady’s perverse choice to wear this coat constitutes a deliberate attempt to derail conversations and to bait denigrations. I would be, but contemplating the appearance of this coat in this context has short-circuited my very understanding of sympathy. Trump went to the border to perform compassion. Her clothes, with their literally literal denial of empathy, did not give a damn.

UK Columnist Slammed for ‘Trying to Stir Unrest’ With Her Stance...

Why Joe Biden is holding on to such a strong lead...

Bernie Sanders was arguing against mass incarceration as early as 1991