Home Culture Is It Curtains for the Drama Book Shop? | 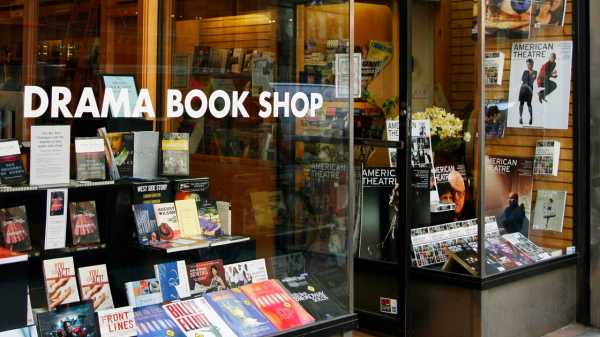 There’s a particular pleasure in reading a play. It gives you the chance to be director, set designer, and casting agent, as you flip the pages with invigorating speed. Plays are quick to read, so, before you know it, you’re at the appendix of necessary props, which often reads like a shopping list for the imagination: one Victrola, four sherry glasses, two pairs of slippers, one bloodied head, five javelins. When I was a teen-ager in Manhattan, I used to kill time at Applause Theatre Books, on West Seventy-first Street, down a flight of stairs. I’d browse through the play scripts, with their pale pink or yellow or green covers, courtesy of Samuel French or Dramatists Play Service. One day, I pulled down a script based purely on its title—“Marco Polo Sings a Solo,” by John Guare—and wound up directing it at college months later.

Applause shut its doors in 2005, leaving its older competitor, the Drama Book Shop (founded in 1917, or thereabouts, by the Drama League), the only theatre bookstore in town. Throughout the past century, it has traipsed through at least half a dozen locations, the current one being a storefront on West Fortieth Street, a convenient midpoint between the Broadway houses and the rehearsal studios in the Thirties. The place is so beloved by theatre people that, when a pipe burst, in 2016, and wiped out thirty per cent of the store’s inventory, Lin-Manuel Miranda (who wrote part of the musical “In the Heights” in the downstairs offices) launched a public campaign that turned the disaster into a windfall.

You know what comes next, because it’s a new old story: a cherished New York institution faces rising rents, announces that it’s getting priced out of the neighborhood, and inspires a heartwarming yet probably futile community response. This week had already been a downer for independent bookstores, after McNally Jackson announced that it would have to leave its Prince Street location. Then, on Wednesday, Crain’s reported that the Drama Book Shop will also be forced from its home. The $18,500 rent, already a stretch, will go up to an unreachable sum on February 1st. The shop is hoping to find another space, but likely at half the size, if anything.

On Thursday afternoon, the shop was bustling with customers. Near shelves of musical librettos, a woman in a head scarf sat reading Marsha Norman’s “ ’night, Mother,” with Ntozake Shange’s “for colored girls who have considered suicide / when the rainbow is enuf” waiting on her lap. A young blond guy bought a copy of Sam Shepard’s “Fool for Love,” while customers petted Chester, the “shop dog,” a ten-year-old German spitz, who sat by a jar for donations to Puerto Rico. Other customers checked out the novelty items: a 2019 calendar of Shakespearean insults, a hundred-and-twenty-five-dollar first edition of “Who’s Afraid of Virginia Woolf?,” a red “Hamilton” tank top emblazoned with the lyric “Immigrants: We Get the Job Done.” (Miranda had been in the store that morning to sign all the “Hamilton” merchandise, which sold out within an hour.) “This isn’t abnormal,” an employee said of the crowd.

In the back office, Allen Hubby, the shop’s jolly vice-president, sighed, “Maoz Falafel, down the street, that closed a few weeks ago. New York Elegant Fabrics had to move. I think landlords have lost their minds.” Hubby has worked at the store on and off since 1978. His aunt, who is eighty-three, has owned it since his uncle died; the uncle got a third of the ownership in 1957, when the previous owner retired. Hubby has seen the store through three locations, and there were at least three before that. “Our best bet would be to go into partnership with someone,” he said. He’s already heard from someone who was interested in combining the store with a cabaret and from a theatre company that might want to house the bookstore in its lobby. Many of the customers are actors, students, or artists, he said. “And theatre aficionados. They used to make up about a third of our clientele. Now it’s about twenty per cent.”

At the checkout counter, a speech coach and actress named Sarah Storm had an armful of scripts: “Collective Rage,” “Every Brilliant Thing,” and the new Broadway play “The Ferryman.” (She loves Irish dialects, she explained.) “I didn’t know what I came to buy, but I decided new plays would be the thing,” she said. She had recently sold some used plays to the shop and was using her earnings to stock up on new ones. “I’ve pulled seventeen different things off the shelves, and I keep thinking I’m done,” she said. “My attitude is, I will spend as much as I humanly can over the next few months.” She sniffed. “I’m getting emotional as I talk about it. Amazon is easy, but this place is meaningful.” Nearby, an employee showed a customer to the Brecht section, saying, loudly, “If it ain’t Brecht, don’t fix it!”

Conor Murray and Robbie Henshaw out for rest of November series

Tristan Harris says tech is “downgrading” humanity — but we can...

A vicious Senate primary is hurting Republicans in Wisconsin