Home Culture Jacqueline Novak Chews Over the Blow Job in Her One-Woman Show “Get... 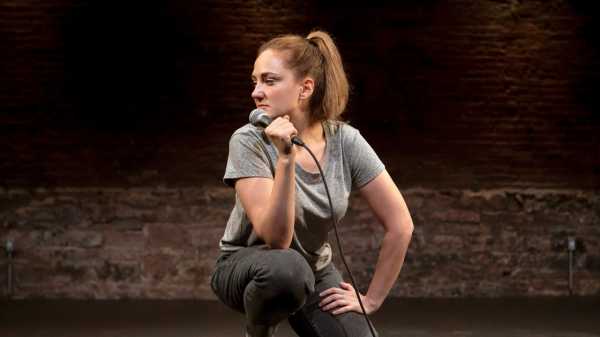 Consider the penis: the cock, the anaconda, the boner. There is a case to be made—the comedian Jacqueline Novak makes it with the thoroughness of a champion debater in her new one-woman show, “Get on Your Knees”—that the descriptive language we use for the male member is not really descriptive at all. The phrase “rock hard,” for instance: “No geologist would say ‘This quartz is penis hard.’ ” Novak encourages her audience to imagine a game of penis, paper, scissors—hardly a fair fight, where sharpened steel is involved. Not even “erection” is up to snuff. (“A bit architectural for what’s going on there.”) And isn’t it interesting, Novak asks, that all the “old, classic things people say about women” seem to fit the male organ as snugly as a reinforced jockstrap? “Women are so-o-o sensitive. They’re always reacting to things. They’re needy; they nag you. They poke you in the night like, ‘Hello? Are you awake? I am.’ ” The male orgasm, too, is stereotypically feminine, a “classic hysteric—turn-of-the-century, Vienna neurotic,” a spluttering, blurting thing, like Abigail crying witch in the courthouse scene of “The Crucible,” whereas the female variety is stoic and masculine, “pulsing like Vin Diesel in the sunshine.” Hot!

Penises do not like to be laughed at, and who can blame them? When I saw “Get on Your Knees” (directed by John Early, it’s running at the Cherry Lane Theatre through August 18th) my eye kept falling on a man with the big hair and triangular torso of Johnny Bravo sitting front and center, and so did Novak’s. (“I’m using you as my anchor,” she told him. “You have strong energy.”) With analytical swagger, Novak goes deep on the semantics of the male member and the equally vulnerable male ego, but she is not all mockery. After all, she is a fan—one of those deeply uncool women who, in this queer year of 2019, still “lusts after the common shaft.”

Novak’s main subject, as her title suggests, is the blow job—the first, and most baffling, sex act that most straight girls are called upon to perform. Novak was twelve when she learned that her teeth “were a danger to men.” The imparter of this pearl of wisdom was the older sister of her best friend, a self-proclaimed “blow-job queen” who instructed the younger girls never to let their enamel get in the way of a man’s pleasure. Novak is hilarious on the subject of the things that women do to accommodate male comfort; I will not spoil the smart payoff of the long autobiographical arc that takes up her show’s second half, except to say that it will make you wonder whether such physical (and mental) contortions are to men’s benefit in the first place.

The female body does not have to be on a stage to be on display. Lately, though, female comedians have been taking advantage of their platform to insist that their audience take a close look at them, on their own terms. Amy Schumer did her latest standup tour while heavily pregnant, a path pioneered by Ali Wong, whose skintight minidresses have become the stuff of legend (and many a Halloween costume). Novak goes in a different direction, dressing in jeans and a silhouette-swallowing gray T-shirt. It’s the kind of outfit that a woman might wear if she wanted to try to pass unnoticed on a walk through the city on a summer day, though male attention has a way of piercing through even the best defenses. Novak jokes about the burdens of being “incarnate at all”—“a nightmare for an intellectual like myself,” she says, with a self-deprecating vocal shrug. “Every day you leave the house with goals and dreams and things to do, you’re forced to lug it along, like a sack of sex potatoes.”

By the end of the show, Novak will have described herself in the most intimate of situations, but whatever image she leaves in her audience’s minds she’ll have put there herself. Her comedy is an overthinker’s delight, and a reminder that a woman’s humor can cut as deeply as her rage. The only disappointment is that she makes no mention of the inequality of the oral sexes, the enduring consensus that what marks a girl’s sexual maturity is giving head and what marks a boy’s is receiving it. Maybe there is a future show in store on the foibles of cunnilingus. I’d like to see her demolish the phrase “eating out.”

“The American Meme” Records the Angst of Social-Media Influencers |