Home Culture James Longley’s “Angels Are Made of Light” Captures the Daily Despair of... 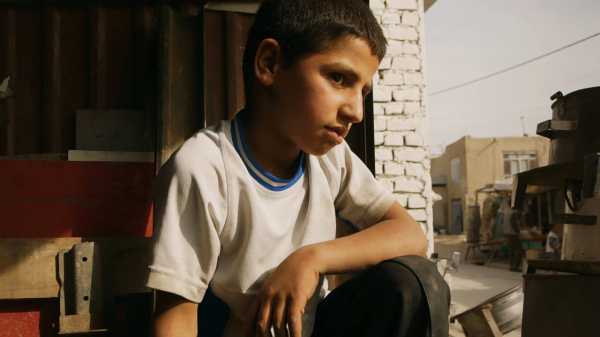 In the Daqiqi Balkhi School in Kabul, a teacher asks several rows of young boys what they have seen in the clouds. Next, he tells them to draw a beautiful landscape. He also frequently asks them to sketch parrots in their notebooks. “Then, after a while, your notebook is full of parrots,” Rostam, a thirteen-year-old student who is hunched over his notebook, says, staring at the blackboard. The classroom is one of several that James Longley observed for three years while filming “Angels Are Made of Light,” an unscripted and unmediated portrait of quotidian life in an old neighborhood of Kabul. “I was there long enough that people were used to me. They’d forgotten about the mechanism of recording,” Longley said recently, in the days after the seventeenth anniversary of America’s presence in Afghanistan. “I wanted to record a realistic picture of Kabul and re-create how I imagined the people in the film were experiencing that reality,” he told me. “A phantasmagoria of Kabul’s old city neighborhood.”

On September 11, 2001, Longley was in Brooklyn editing his first feature film, “Gaza Strip.” In the ensuing months, he thought about going to Afghanistan, but instead chose Iraq, because “it’s nice to be there from the beginning of what happens.” He made a film, “Iraq in Fragments,” that is a portrait of the war’s first two years—it’s arranged in three segments, from the perspective of Sunni, Shiite, and Kurdish residents, respectively. It was nominated for an Oscar in 2007, and Longley received a MacArthur grant in 2009. Like “Angels,” “Iraq in Fragments” chronicles reality with the cinematic techniques of fictional films. The films show “reality as I understand it,” Longley said, “which is not objective.”

In “Iraq in Fragments,” there are many unwittingly profound statements, usually spoken by children. “Iraq is not something you can cut into pieces,” a young boy remarks. “I kept working and stopped dreaming,” another says, of the choice between being employed in an auto shop and continuing with school. In the background of certain takes, one can see Iraqi citizens and American soldiers eyeing each other with mutual trepidation. “Seeing how people look at other people shows you everything you need to know about them,” Longley told me. But the substance of the film lies in such scenes as when a child fails first grade for the fourth year in a row; Longley films the student’s father berating him for not being able to write the father's name.

For “Angels Are Made of Light,” Longley moved to Kabul, where he shared, with French journalists, a house situated behind the Ministry of the Interior. “We were sort of drafting on their security,” he told me. Although he filmed for a few weeks in Afghanistan’s largest orphanage, the school turned out to be the most cohesive setting: “You avoid a lot of the social problems of filming inside of people’s houses. It’s very uncomfortable for a family if you go into their house with a movie camera. The automatic assumption is that something untoward is taking place with a camera involved. It puts people on the spot, and I’d rather not do that, because I want to film them over a long period of time.” The school’s teachers and students provided a continuous cast; they were present most days and, according to Longley, evinced “how most people tend to feel.” “The kinds of people who are in the film, the working poor, are the center of the bell curve of Afghanistan, socioeconomically—not rich, worried about armed conflict encroaching into their life. The concerns the people in the film have—the dislike for the Americans and for the Taliban and the current government, the dissatisfaction—is quite general in Afghanistan.”

Longley told me that he filmed the students and teachers as though they were movie stars, the Hollywood celebrities of their own milieu. “The framing and the composition and the soft depth of focus is in the style of fiction cinema,” he explained. His reasons go beyond aesthetics. “When we watch those Hollywood movies, or movies with important people in them, we attach importance to people,” he said. “The way that you see them says everything about how you feel about them.”

Amid kites flown by children, a blimp appears in the sky, hovering like the eyes of T. J. Eckleburg in “The Great Gatsby.” On film, the children speculate that “the foreigners brought this balloon,” while, in the audience, moviegoers consider the chasm in Kabul between the granular and the abstract. When I asked Longley about the repeated presence of the blimp, he told me, “the motif of the observation balloon is like this camera watching all of us. There’s a question mark in the audience’s mind—is it meant to be symbolic of God or of some nonterrestrial viewer? It’s this observer. It’s a camera here to film the homeland—it’s comparing the way people are being seen, from above or from the camera.” One student in the film remarks, “It pains me to see how other countries are peaceful. They can study. They can look at us.” The school doubles as a polling place for Afghan elections, and a man dips his finger in black ink to cast his vote. The characters—“not subjects, that’s something I associate with royalty,” Longley said—participate in scenes that many Western viewers have only glanced at in photos or read in a newspaper. “Print requires people to pass through a level of abstraction. You have to go through this symbolic language and imagine it in your own mind. I just want to give you this memory, of a place and of people, as if you had a real experience,” Longley said.

From the English transcript of the conversations he filmed in the school—which amounted to more than five thousand pages—the filmmaker learned that the students sometimes quizzically asked each other, of Longley and his crew, “Who are these people?” The children had virtually no concept of film. “They don’t go to the cinema; they mainly watch Indian and Turkish serials on TV, if anything. It’s surreal that their first real cinematic feature-film experience might be with them as protagonists.” But in some ways this was an asset. “People are less self-conscious if they can’t imagine themselves in the final product.”

Schools are also cinematically compelling—Longley thought about films like “The Class,” which features many nonprofessional actors as students. He cites François Truffaut’s “400 Blows” as influential because of its natural style of filming: “There’s a scene where the two protagonists go to a park, and there’s a performance of Punch and Judy, and Truffaut has a hidden camera underneath the stage, where he’s filming the reaction shots of the kids—totally unguarded, real reactions—setting up a situation where it’s young children. The reactions are completely natural and unforced, unguarded. And I thought, One could make an entire film like that, without actors at all. Put a camera around and let people forget about it. That’s the magical thing about where he finds these moments of truth.”

The daily death toll in Afghanistan often reaches a hundred. “This is this huge population we’ve forgotten and abandoned,” Longley said. “People don’t like to be reminded of things they’ve forgotten.” In one scene of the film, the students take an exam that asks, “What harm does war bring? What injury does it do?” In another classroom, a teacher asks, “When somebody’s heart is heavy, how do they look?” The boys clearly have sufficient, palpable experience to answer the question. “I worry about what will become of us in the end. This thought consumes me,” one of the boys says.

Because “Angels Are Made of Light” focusses on civilian life, Longley sees it as decisively different from other films on Afghanistan. “ ‘Armadillo’ is film about Danish soldiers in Afghanistan, but it’s not really a film about Afghanistan. We never hear from Afghans. They don’t have the speaking parts. It’s about Danish soldiers killing Afghans. And that’s the sort of film Americans tend to watch about Afghanistan—‘Restrepo.’ Other films made from the point of view of soldiers. They’re not really about Afghanistan. They’re about our interest in ourselves in a state of extremis,” he said. His intent is to show “ordinary, nice people” within the sway of habitual events. Speaking of the elections, one of the teachers says, “Whoever takes power won’t benefit us. They fight against each other, but the poor are trampled.” Longley chose not to interview politicians, because “you can read that in the papers.” He said, “If I went with a camera, they’d say the same things, just like anyone who has to stay on message and worry about how they appear. It should be about what ordinary people think, especially because that’s the mass of the population—and if anything happens in the country, the politicians are just going to get on a plane and leave, whereas the ordinary people can’t do that. I just think it’s fair to let their opinion be heard, because they represent the majority of people. I’d like to be making films in solidarity with the underdog. The civilian population is always forgotten about. They’re not the players in the power structure.”

On the eve of Afghanistan’s most recent elections, the Times ran a story in which a poet in the east of the country declared that “his verse had dried up.” In Longley’s Kabul, a child named Sohrab sits in a dusty street ensconced in a book of poems called “What is Life.” “This is the way life passes,” he says. “This war is destroying our country. The divided tribes must become one. I want to write a book like this.” Longley wants audiences to consider not only such a book but also the scaffolding of ordinary life that surrounds its prospective young author. “Children are a good kind of subjects, because you’re asking the audience to go into this new kind of environment they’re not familiar with—if you gave them a ticket that said, ‘Here, you can go and visit Kabul,’ they wouldn’t take it. So the deal I’m making with them is give me two hours, and I’ll give you the experience of being there for years.”

The Wheels of History