Home Culture “Jawline,” Reviewed: A Chilling Look at the Making of a Teen Influencer... 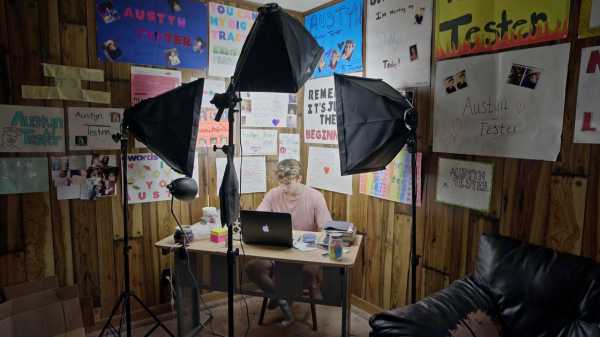 Liza Mandelup, the director of “Jawline,” a stupefying new Hulu documentary about the teen-influencer gauntlet, has said that she filmed for a year before she found her subject, Austyn Tester. There are peripheral teen influencers shown in her film who are much more famous than Tester and therefore less intriguing to watch. Tester was worth the wait. Something like sinlessness lights the whites of his eyes. Like an affectionate worm, he curls around his cats, who sometimes slink into the frame as he broadcasts on YouNow, a platform for real-time, chat-based live streaming. “Broadcasting” is what YouNow calls it, and so does Austyn, his pubescent voice puffing up to meet the importance of the word—his vocation in life. He’s set up a rig in his small bedroom, where he records himself chatting to a small number of viewers, mostly teen-age girls he barely knows. On the Web site’s dash, we can see that he is trending at No. 28 under the hashtag #guys. The conversations are chaste, flustered, adorably prosaic. In an early scene in the film, his hair puttied upward, he apologizes for a glitch in his stream. “I know I need to get better Wi-Fi.”

You want to send him a check: whatever Wi-Fi plan you need, Austyn. But, at the same time, watching Mandelup’s sinewy portrait of this aspiring famous person, you want to disconnect him from his world. Tester lives in Kingsport, Tennessee, with his mother and his brother. They don’t have money. Tester’s father is absent; when he was around, the family says, he was an addict and was physically abusive. (We don’t hear from the father.) Tester’s brother, Donovan, is supportive of his sibling’s dreams, which will make him known around the world. For what? For being famous. For being positive. Social-media stardom has been tautologically engineered such that the path to fame requires only the attainment of fame. “When you become famous, you have a lot of people who look up to you,” Tester says. On YouNow, he is a telegenic preacher, a philosopher of clichéd words, delivering himself to his small flock of followers. Both parties are prey to a decentralized economy that has monetized teen-age anxiety, depression, and general fragility. In such a tempest, they are making each other feel seen. “Remember: storms don’t last forever,” Tester promises. “Whatever you’re going through, it’s not going to last forever.”

Mandelup follows Tester as he is scouted by a vulturine manager, who we only meet once, and, believe me, once is enough. “It is 10:06 P.M. I’m not famous right now. Hopefully, I’ll be famous soon,” Tester says, grinning, in a YouNow video recorded after he receives an initial e-mail from the manager. The manager, based in Texas, invites Tester to go on tour with his other clients, who include Julian and Jovani Jara, identical-twin d.j.s with nearly half a million followers on Instagram. He flies to meet them in Houston—it’s the first time he’s been on a plane. On the tour, Tester, the amateur, and his seasoned colleagues run up on stage and take selfies with the fans, who claw at their frosted hair. Through the deceptively casual weapon of person-on-the-street tour interviews, Mandelup dredges to the surface a distressing dynamic. The girls are uniformly depressed. Some admit to cutting themselves. They say that, at school, they’re bullied. But Tester doesn’t treat them like the other boys do. He loves them, through the screen. Each social-media star thinks that each of his fans is beautiful, and, when the fans shell out two hundred-plus dollars at meet and greets, they get told so to their faces. Mandelup walks the tightest of ropes, exposing the reciprocal delusions fuelling these transactions, juxtaposing the audience’s horror with her subjects’ excruciating pragmatism. This is key to the intelligence of “Jawline.” We gape and we squirm, even as we can’t deny the grain of appeal in the subculture we are touring.

“Jawline” ’s cinematography, by Noah Collier, isn’t afraid to go there. Shots of Tester on his phone emphasize the crane of his neck, how corpse-blue light flushes his cheeks as he trawls his Mac laptop. At a meet-up that Tester arranges at his home-town mall, one girl waves a five-dollar bill at him, requesting that Tester ride a mechanical pony. Collier shoots from a distance, and Tester is swallowed in the frame, looking awkwardly exotic, like a struggling colt. Some of Collier’s shots are downright dangerous, and they aren’t the ones of ponytailed girls in braces, crying as they meet a Bieber clone at a mall. They’re the slow-motion, pastel-colored, waking-fantasy pans of underage or close-to-underage boys, gyrating offbeat for the world in their phones, their torsos pink and their waistbands low. Tester, lounging by a river in Kingsport, grabs the skin on his stomach and complains about feeling fat. Without clogging the documentary with explainers, Mandelup lyrically traces the complicated sexualizing and queering of male sex objects in the self-stream era.

Tester is a fascinating subject because his brain is trained for the gaze. Knowing that he’s being watched by Mandelup, he hyperactively tidies the adversities of his life, and the paradoxes of his desires, for her frame. (What is “Jawline” if not an opportunity to consolidate the fickle prestige that slips from his grip as soon as the credits roll?) The same is true of a secondary subject in the film, a social-media manager named Michael Weist. Weist runs an animal house of influencers in Los Angeles. Things there are tense. Only a few years older than his charges, Weist is always cruelly demanding that the boys do a video, and they’re always bitchily testing his authority. What authority, really? An impressive braggart, Weist isn’t trying to come off as a father figure. He plays the shark. Toward the end of “Jawline,” it is revealed that two of Weist’s former clients whom we’ve gotten to know, the hugely popular YouTubers Bryce Hall and Mikey Barone, accused him of sexual assault, and that Weist, in response, sued them for defamation. (The suit was settled out of court, and Hall and Barone apologized to Weist.) Clearly rattled during the film, Weist overcompensates with the snobbery of expertise. “Talent is always replaceable,” he says, in a voice-over, as we watch Tester board a bus to school. In an earlier scene, evaluating the modest reach of Tester, who had twenty-three thousand followers on Instagram at the time, Weist scoffs, “I wouldn’t touch him.” To the impressionable Tester, obscurity would be a tragedy. But, maybe, when he gets older, he’ll understand it as a blessing.